The document Uniform Circular Motion Class 9 Notes | EduRev is a part of the Class 9 Course Science Class 9.
All you need of Class 9 at this link: Class 9

Motion of a particle (small body)along a circle (circular path), is called circular motion.If the body covers equal distances along the circumference of the circle, in equal intervals of time, then motion is said to be a uniform circular motion. When a body moves along a circular path, then its direction of motion changes continuously.

Note: A uniform circular motion is a motion in which speed remain constant but direction of velocity changes continuously. 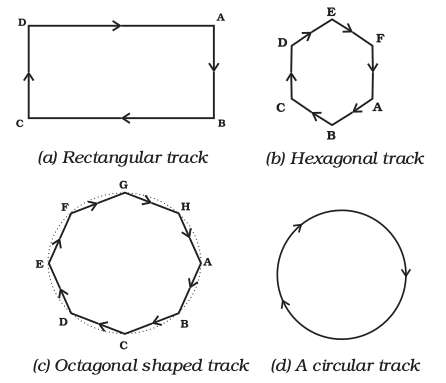 Examples of Uniform Circular Motion(i) Motion of moon around the earth.

(ii) Motion of a satellite around its planet.

(iii) Motion of earth around the sun.

(iv) An athlete running on a circular track with constant speed.

(v) Motion of tips of the second hand, minute hand and hour hand of a wrist watch.

It is a convenient unit for measuring angles in physics.The arc AB of the circle, has length l and subtends an angle q at the centre C. A projectile is an object moving in space (or air) under the effect of gravitational effect of earth alone (without any other external force) is called the projectile motion and the object is caled the projectile.The examples of projectile are missile shot from a gun, a bomb released from an airplane, a batted cricket ball, a ball thrown at some angle with horizontal and a rocket after its fuel is exhausted.The motion of a projectile may always be resolved into two perpendicular straight line motions, viz, horizontal and vertical motions. These motions in perpendicular directions are quite independent of each other.

The trajectory of the projectile is parabolic.

At maximum height vertical component of projectile's velocity is zero, i.e., vy = 0from relation v2 = u2 + 2as, we have

This equation shows that the height H is maximum when

That is why the athlete in high jump tries to throw his body vertically upward.

Obviously the maximum range is achieved when angle of projection is 45°.