The document Unit 1: Bill Of Exchange and Promissory Notes (Question With Answer) CA CPT Notes | EduRev is a part of the CA CPT Course Principles and Practice of Accounting.
All you need of CA CPT at this link: CA CPT

A promissory note is an instrument in writing, not being a bank note or currency note containing an unconditional undertaking signed by the maker to pay a certain sum of money only to or to the orderof a certain person. Under Section 31(2) of the Reserve Bank of India Act a promissory note cannot bemade payable to bearer.A party which receives a Promissory Note or receives an accepted Bill of Exchange will treat it as a new asset under the name of Bills receivable. A party which issues a Promissory Note or accepts a Bill of Exchange will treat it as new liability under the heading of Bills Payable.Multiple Choice QuestionsQues 1: On 1.1.2017, A draws a bill on B for ₹1,20,000 for 3 months’ maturity date of the bill will be:

(a) A(b) B(c) CAns: cQues 5: A bill of ₹120,000 was discounted by Saras with the banker for ₹1,18,800. At maturity, the bill returned dishonoured, noting charges ₹ 200. How much amount will the bank deduct from Saras’s bank balance at the time of such dishonour?

(a) Creditor(b) Debtor(c) Debenture holderAns: aQues 13: At the time of drawing a bill, the drawer credits

(a) An unconditional order

(c) A request to deliver the goodsAns: aQues 16: A promissory note contains

(a) An unconditional order

(c) A request to deliver the goodsAns: b

Ques 17: The rebate on the bill shows that

(a) It has been endorsed

(b) It has been paid after the date of maturity

(c) It has been paid before the date of maturityAns: cQues 18: Notary Public may charge his fee from the

(a) Holder of bill of exchange

A promissory note needs no acceptance, as the debtor himself writes the document promising to pay the stated amount. Like bills of exchange, promissory notes are also negotiable instruments, and can be transferred by endorsement. In case of bill of exchange, the drawer and the payee may be the same person but in case of a promissory note, the maker and the payee cannot be the same person.Practical QuestionsQues 1: On 1st January, 2016, A sells goods for `10,000 to B and draws a bill at three months for the amount.B accepts it and returns it to A. On 1st March, 2016, B retires his acceptance under rebate of 12% per annum. Record these transactions in the journals of B.Ans:

Ques 2: A draws upon B three Bills of Exchange of  ₹3,000, ₹ 2,000 and ₹ 1,000 respectively. A week later his first bill was mutually cancelled, B agreeing to pay 50% of the amount in cash immediately and for the balance plus interest ₹100, he accepted a fresh Bill drawn by A. This new bill was endorsed to C whodiscounted the same with his bankers for ₹1,500. The second bill was discounted by A at 5%. This bill on maturity was returned dishonoured (nothing charge being ₹30). The third bill was retained till maturity when it was duly met. Give the necessary journal entries recording the above transactions in the books of A.Ans: 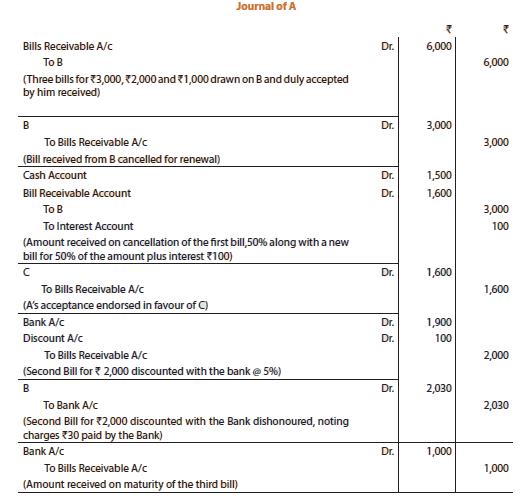 Note: It is assumed that the bill for ₹1,600 has not yet fallen due for payment

Ques 3: Journalize the following in the books of Don:

(i) Bob informs Don that Ray’s acceptance for ₹ 3,000 has been dishonoured and noting charges are ₹40. Bob accepts ₹1,000 cash and the balance as bill at three months at interest of 10%.Don accepts from Ray his acceptance at two months plus interest @ 12% p.a.

(iii) Don meets his acceptance in favour of Singh for ₹ 4,500 by endorsing John’s acceptance for ₹4,450 in full settlement.

(iv) Ray’s acceptance in favour of Don retired one month before due date, interest is taken at the rate of 6% p.a. 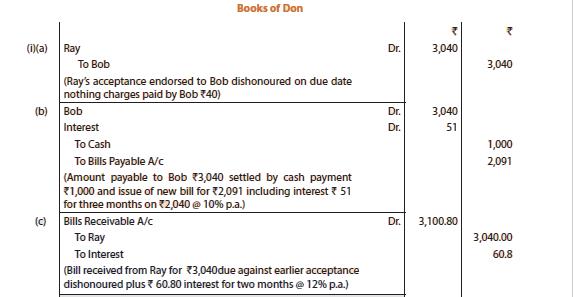