The document Unit 1: Introduction to Partnership Accounts (Question with Answer) CA Foundation Notes | EduRev is a part of the CA Foundation Course Principles and Practice of Accounting.
All you need of CA Foundation at this link: CA Foundation

Ques: 1 If a firm prefers Partners’ Capital Accounts to be shown at the amount introduced by the partners as capital in firm then entries for salary, interest, drawings, interest on capital and drawings and profits are made in(a) Trading Account(b)  Profit and Loss Account(c) Partners’ Current AccountAns: (c)Ques: 2 In the absence of any agreement, partners are liable to receive interest on their Loans @(a) 12% p.a.(b)  10% p.a.(c)  6% p.a.Ans: (c)Ques: 3 The relationship between persons who have agreed to share the profit of a business carried on by all or any of them acting for all is known as ……… (a)  Partnership.(b)  Joint Venture.(c)  Association of Persons.Ans: (a)Ques: 4 Firm has earned exceptionally high profits from a contract which will not be renewed. In such a case the profit from this contract will not be included in ………(a)  Profit sharing of the partners.

(b)  Calculation of the goodwill.(c)  Both.Ans: (b)Ques: 5 In the absence of an agreement, partners are entitled to (a) Interest on Loan and Advances.(b)  Commission.(c) Salary.Ans: (a)Ques: 6 Partners are supposed to pay interest on drawings only when ……… by the ………(a) Provided, Agreement.(b)  Agreed, Partners(c)  Both (a) & (b) above.Ans: (c)Ques: 7 When a partner is given a guarantee by the other partner, loss on such guarantee will be borne by(a) Partner who gave the guarantee(b)   All the other partners.(c) Partnership firm.Ans: (a)Theory questionsQues 1. Q1. Weak, Able and Lazy are in partnership sharing prots and losses in the ratio of 2:1:1. It is agreed that interest on capital will be allowed @ 10% per annum and interest on drawings will be charged @ 8 % per annum. (No interest will be charged/allowed on Current Accounts).The following are the particulars of the Capital and Drawings Accounts of the partners: 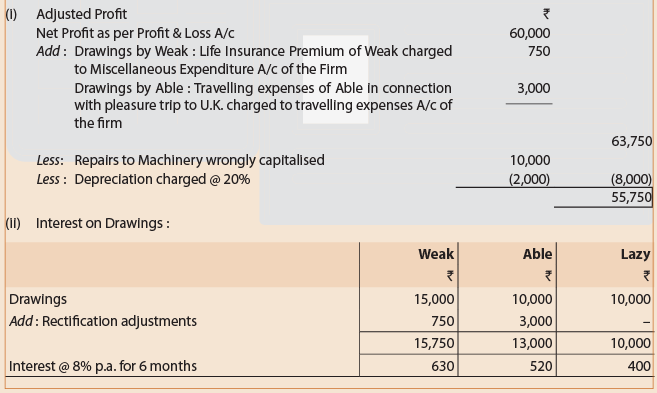 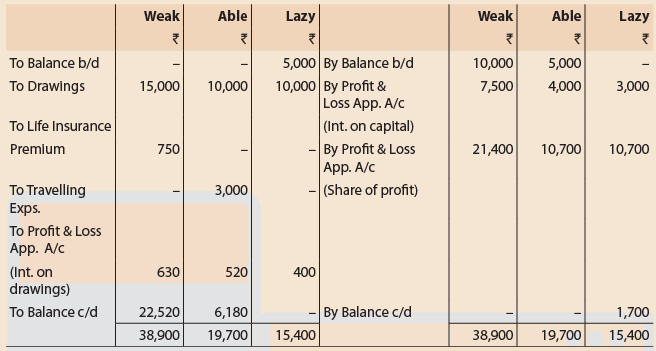 Ques 2. Ram and Rahim are in partnership sharing profits and losses in the ratio of 3:2. As Ram, on account of his advancing years, feels he cannot work as hard as before, the chief clerk of the firm, Ratan, is admitted as a partner with effect from 1st January, 2016, and becomes entitled to 1/10th of the net profits and nothing else, the mutual ratio between Ram and Rahim remaining unaltered. Before becoming a partner, Ratan was getting a salary of Rs 500 p.m. together with a commission of 4% on the net profits after deducting his salary and commission. It is provided in the partnership deed that the share of Ratan’s profits as a partner in excess of the amount to which he would have been entitled if he had continued as the chief clerk, should be taken out of Ram’s share of profits.  The net profit for the year ended December 31, 2016 is Rs 1,10,000. Show the distribution of net profit amongst the partners.Ans: Amount due to Ratan as a Chief Clerk

Profit and Loss Appropriation Account for the year ended 31.12.2016

Ques 3. X and Y are partners. As per terms of agreement interest is allowed on capital at 8% p.a. and charge on drawing at 10% p.a. X withdrew Rs.40,000 pm at the end of each month and Y withdrew Rs. 120,000 at the end of each quarter. You are required to fill the missing figures in following accounts:Profit and Loss Appropriation Account for the year ended March 31, 2017