At this point, Prandtl introduced an additional assumption which like a plane Couette flow takes a constant shearing stress throughout, i.e

where tw   denotes the shearing stress at the wall.

On integrating we find

Despite the fact that Eq. (34.5) is derived on the basis of the friction velocity in the neighbourhood of the wall because of the assumption that Tw = Tt constant, we shall use it for the entire region. At y = h (at the horizontal mid plane of the channel), we have

The constant of integration is eliminated by considering

Equation (34.6) is known as universal velocity defect law of Prandtl and its distribution has been shown in Fig. 34.1 Here, we have seen that the friction velocity ur is a reference parameter for velocity.Equation (34.5) can be rewritten as

.Contd. from previous slideThe no-slip condition at the wall cannot be satisfied with a finite constant of integration. This is expected that the appropriate condition for the present problem should be that y0 at a very small distance y= y0 from the wall. Hence, Eq. (34.5) becomes

the unknown β is included in D1 .

Equation (34.8) is generally known as the universal velocity profile because of the fact that it is applicable from moderate to a very large Reynolds number.

However, the constants A1 and D1 have to be found out from experiments. The aforesaid profile is not only valid for channel (rectangular) flows, it retains the same                 functional relationship for circular pipes as well . It may be mentioned that even without the assumption of having a constant shear stress throughout, the universal                     velocity profile can be derived

This velocity distribution has been shown through curve (b) in Fig. 34.2 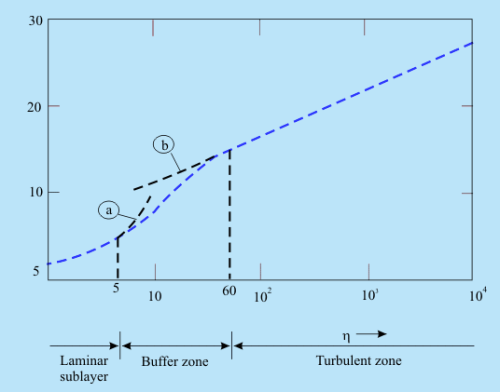 where ∈p is the average height of the protrusions inside the pipe.

Physically, the above expression means that for smooth pipes protrusions will not be extended outside the laminar sublayer. If protrusions exceed the thickness of laminar sublayer, it is conjectured (also justified though experimental verification) that some additional frictional resistance will contribute to pipe friction due to the form drag experienced by the protrusions in the boundary layer.

At the centre-line, the maximum velocity is expressed as

Note that v no longer appears with R and ∈p . This means that for completely rough zone of turbulent flow, the profile is independent of Reynolds number and a strong function of pipe roughness .

where R  is the pipe radius

For ∈p →0 , this equation produces the result of the smooth pipes (Eq.(34.10)). For Re→∞ , it gives the expression for friction factor for a completely rough pipe at a very high Reynolds number which is given by

Turbulent flow through pipes has been investigated by many researchers because of its enormous practical importance. 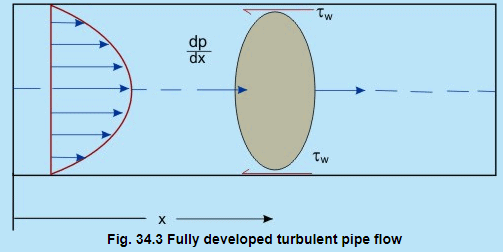 H. Blasius conducted a critical survey of available experimental results and established the empirical correlation for the above equation as

is the time mean velocity at the pipe centre and y is the distance from the wall . The exponent n varies slightly with Reynolds number. In the range of Re ~ 105, n is 7.