The document Valuation and Calculation of Custom Duty - Customs Act,1962, Indirect Tax Laws B Com Notes | EduRev is a part of the B Com Course Indirect Tax Laws.
All you need of B Com at this link: B Com 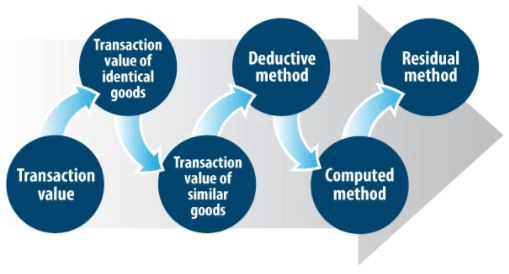 Are you uncertain of how to properly declare the value of your goods when importing into Canada? You are not alone, many importers are. This lack of clarity is partly due to the many rules and factors when determining value for duty. With an expectation to be compliant,  customs valuation is one of the three main targets for a Canada Border Services Agency (CBSA) audit. Unfortunately, we see many importers spending the least amount of attention to this area. Valuation can be an intricate area to navigate if your foreign purchases involve situations which could change the declared value to CBSA.

So, let’s take a look at the 6 Methods of Determining Customs Valuation by first understanding what valuations are.

Valuation is the determination of the correct value of goods. CBSA requires all goods imported and declared into Canada have a value for duty which is the base figure on which you must calculate the duty and taxes you may owe the CBSA on your imported goods.

With items like samples, replacements, warranty items, short-shipped goods, you are still required to declare a fair market value although in the end payment of duties and taxes may be unnecessary.

How is Customs Value Determined?

The World Trade Organization’s Valuation Agreement is the basis of the requirements of each of these methods. These rules ensure the value of the imported goods are in accordance with commercial reality, and they prohibit the use of arbitrary or fictitious customs values.

What is Transaction Value?

Importers should use this method when determining the value for duty on the price paid or payable for imported goods with consideration to certain adjustments. This method is the most commonly used. When selling goods for export to Canada to a purchaser in Canada, the Transaction valuation applies. We have outlined the difference between the price paid and payable below:

You must use the transaction value method whenever possible to determine the customs value of imported goods.

What is Transaction Value of Identical Goods?

When you cannot use transaction value, you must use an established value for duty of identical goods. Identical goods are considered the same in all respects as the goods being appraised. They have one exception however and that is for minor differences in appearance. These difference cannot affect the value of the goods. For goods to qualify, production would have to be in the same country as the identical goods.

What is Transaction Value of Similar Goods?

When you cannot use transaction and identical goods, you must use an established value for duty of similar goods. For goods to qualify, the value of goods must be:

What is Deductive Method of Valuation?

If none of the above methods apply, the deductive value method is the next method to consider. The basis of this method is on the Canadian importers most common selling price (per unit) of the goods sold to Canadian customers.

What is Computed Method of Valuation?

The computed value is the cost of production, profit and general expenses of the imported goods. These must be realized by producers in the exporting country when selling the same type of goods to Canadian importers.

What is Residual Method of Valuation?

The residual method does not identify specific requirements for determining a value for duty. Instead, the value is based on one of the other methods (considered in sequence). It also requires the least amount of adjustment. The value must be fair market, and reflect commercial reality.

In the end, the final value for duty can also be influenced by: