The document Vapour Pressure of Liquid Solutions Class 12 Notes | EduRev is a part of the JEE Course Chemistry Class 12.
All you need of JEE at this link: JEE

CONCEPT OF VAPOUR PRESSUREWhen a pure liquid is kept in closed vessel (in which no air is present) the liquid evaporates to give the vapours.
The molecules of the liquid which possess high kinetic energy have a tendency to change to vapour state.
After sometime a dynamic equilibrium is established between liquid and vapours.

At Equilibriumrate of evaporation = rate of condensation.
H2O (ℓ) ⇌ H2O (g)
The pressure that the vapours exert at equilibrium on the walls of the container or on the surface of the liquid is called the vapour pressure of the liquid at that temperature, Figure (a).

Key concept: When the liquid is in equilibrium with vapours,
Liquid ⇌ Vapours,the Kp of the system is Kp = Pv,where Pv is the vapour pressure.We know that Kp for a given chemical equilibrium is a constant and only depends on temperature. Therefore the vapour pressure of the liquid is a constant and does not depend on the nature of the vessel used and that it only depends on temperature.Case 2: Take a vessel with the same liquid as in case 1 and cover it with a glass plate (of negligible weight) having a hole in it. Would the vapour pressure be the same now?

The vapour pressure of liquid depends upon (ii) Temperature: Higher the temperature, greater would be the vapour pressure.

This is because when temperature is raised, kinetic energy of the molecules increase and therefore the number of molecules leaving surface of liquid, is large.The Clausius Clapeyron equation tells very clearly that as temperature increases the right hand side remains highly and thereby vapour pressure increases.This equation is, 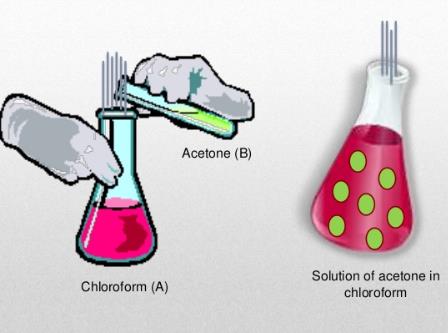 Liquid Solution is formed when we dissolve a solid, liquid or gas in a particular liquid solvent.
Vapour Pressure of liquid solutions is defined as the pressure exerted by the vapours on the liquid solvent when kept in equilibrium and a certain temperature.

Some characteristics of the vapour pressure of liquid solutions are as follows:

Liquid solution can contain volatile solute and solvent as well. In most cases, the solvent is volatile in nature and the solute left out to be non-volatile.Vapour pressure can be evaluated in two cases which are: