The document Variational Principle : Euler-Lagrange Equation and its Applications (Part -2) - Classical Mechanics Physics Notes | EduRev is a part of the Physics Course Physics for IIT JAM, UGC - NET, CSIR NET.
All you need of Physics at this link: Physics

Consider the motion of a planet due to the force exerted by Sun. Using polar coordinates we can write the Lagrangian for the planet as

The Euler- Lagrange equation for the angle variable is

This is the statement of conservation of energy which follows from Kepler's second law.The equation for the radial variable is

from which we get

Substituting from (8), we can write this as

From the above we get

which is a statement of conservation of energy.

The new qis need not even have the dimension of length (e.g. in spherical polar, the coordinates θ and φ are dimensionless.) This new set q1, q2,..........,qd are known as the generalized coordinates.

are independentt of one another, the velocities

are also independent set. These are known as the generalized velocities. [Lest there is confusion, I wish to emphasize that the number of generalized coordinates for a system with 3N degrees of freedom is 3N , it is only when the constraints are taken care of, it reduces to 3N k and one only needs these many independent coordinates to completely specify the system.]

the partial derivative of xi with respect to qj , when the remaining d 1 generalized coordinates are held xed.The real velocities associated with xi = dxi/dt and

If xi has no explicit time dependence (time dependence could arise, for instance, due to moving constraints), the last term of the above vanishes and we are left with

This relationship is referred  as Dot Cancellation Theorem.We will now show that the validity of the Euler Lagrange equation is not restricted to the Cartesian coordinates alone; they are equally valid in generalized coordinates. We have

where, in the last step, we have used in dot-cancellation relation. Taking time derivative of both sides of (11), we get

since the last term is zero because the velocities

The word "Brachistochrone" is derived from the greek words brachistos meaning the shortest and chromous meaning time - i.e. it is about the shortest time problem.Consider a bead sliding frictionlessly along a wire in a vertical plane from the point (x1, y1) to the point (x2, y2), where y2 lies lower than than y1. The problem is to design a path for which the time to slide is the shortest. Let us take the origin to be at the rst point (x1, y1) and take y to be positive downwards. The shape of the wire is given by y = f (x) ≥ 0. The wire is taken to lie below and to the right of the origin so that x ≥ 0 and y ≥ 0 along its path.The time to come down is

The speed of the bead as it comes down is determined by the conservation of energy. Since y is positive downwards, the total energy must remain zero if the potential energy is taken to be zero at the origin. Thus we must have

It is convenient to convert this to an integral over y

where x' = dx/dy. Thus the Lagrangian function is a function of x' and y.

has no dependence on x, the rst term of the above vanishes

where we have, for reasons to become clear later, chosen the constant to be 1=2R.This gives

We can parameterise the above by taking

These are parametric equations for a cycloid.

Fig. 5: The path of a brachistochrone is shown in red

The lowest point of the brachistochrone corresponds to θ = π. The path is a curve traced out by a xed point on the circumference of a circle of radius R as the circular disk moves on a horizontal oor. The constant R is determined by the condition that the curve must pass through the point y = y2. Thus if y2 is the lowest point then y2 y1 = 2R. an interesting point is that the time taken to descend to the lowest point is independent of the point from which it was released, i.e., it speeds up appropriately to cover the distance to the lowest position in the same time. The time is calculated as follows:

With the above substitution, i.e.,

As a second example, we consider a spring pendulum, in which the bob of the pendulum is connected to the support not by means of an inextensible string but by means of a spring whose length can only vary along its length (this can be achieved by encasing the spring in tube, for instance). 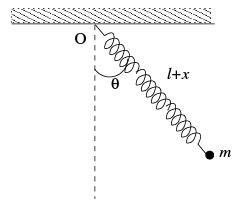 Let the instantaneous distance of the bob from the support be l + x, where l is the natural length of the spring. We choose x to be one of the generalized coordinates and the angle θ that the spring makes with the vertical as the other (note that unlike the case of simple pendulum which only had one degree of freedom, we now have two). The kineticand the potential energies of the system are given in terms of these coordinates and the corresponding velocities as

The Lagrangian is of course, L = T − V . The Euler- Lagrange equations for the x coordinates are

The right hand side of this equation is the torque of the weight about the point of suspension. The left hand side is the rate of change of the angular momentum as can be easily seen, since the tangential velocity is

and the distance from the support is (l + x). Explicitly differentiating (17) and cancelling a common factor, we can rewrite this equation as

This can be interpreted in the rotating frame, the rst term being the angular acceleration term and the second the Coriolis term.