What is Coulomb’s Law?

A French physicist Charles Augustin de Coulomb in 1785 coined a tangible relationship in mathematical form between two bodies that have been electrically charged. He published an equation for the force causing the bodies to attract or repel each other which is known as Coulomb’s law or Coulomb’s inverse-square law. 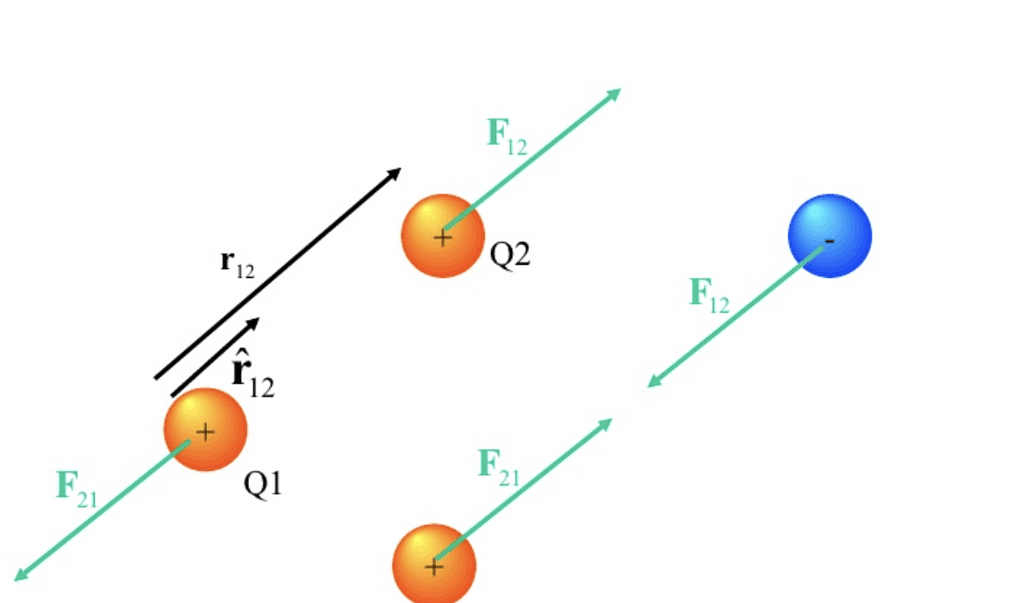 What is 1 Coulomb of Charge?

Note: Coulomb force is true only for static charges.

If q is slightly displaced towards A, FA increases in magnitude while FB decreases in magnitude. Now the net force on q is toward A so it will not return to its original position. So for axial displacement, the equilibrium is unstable.If q is displaced perpendicular to AB, the force FA and FB bring the charge to its original position. So for perpendicular displacement, the equilibrium is stable.

Application of The Coulombs Law

1. If the force between two charges in two different media is the same for different separations,

6. If the force of attraction or repulsion between two identical conductors having charges q1 and q2 when separated by a distance d is F. Also if they are put to contact and then separated by the same distance the new force between them is

10. Between a proton and an electron separated by a certain distance: Electrical force/Gravitational force = 1039

12. If Coulomb’s law is applied to two identical balls of mass m are hung by silk thread of length ‘l’ from the same hook and carry similar charges q then;

Example 1: Charges of magnitude 100 microcoulomb each are located in vacuum at the corners A, B and C of an equilateral triangle measuring 4 meters on each side. If the charge at A and C are positive and the charge B negative, what is the magnitude and direction of the total force on the charge at C?

The situation is shown in fig. Let us consider the forces acting on C due to A and B.Now, from Coulomb’s law, the force of repulsion on C due to A i.e., FCA in direction AC is given by 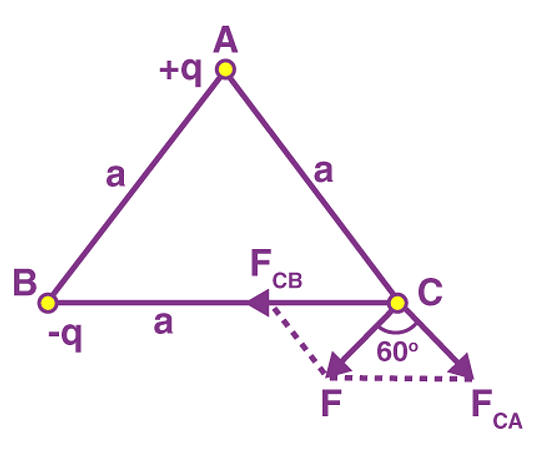 The force of attraction on C due to B i.e., FCB in direction CB is given by

Thus the two forces are equal in magnitude. The angle between them is 120º. The resultant force F is given by

This force is parallel to AB.

Example 2: The negative point charges of unit magnitude and a positive point charge q are placed along the straight line. At what position and for what value of q will the system be in equilibrium? Check whether it is stable, unstable or neutral equilibrium.

The two negative charges A and B of unit magnitude are shown in fig. Let the positive charge q be at a distance rA from A and at a distance rB from B.Now, from coulombs law, Force on q due to A

Force on q due to B

These two forces acting on q are opposite and collinear. For the equilibrium of q, the two forces must also be equal i.e.|FqA| = |FqB|or

towards qForce on A by B =

The document Coulomb's Law Notes | Study Physics For JEE - JEE is a part of the JEE Course Physics For JEE.
All you need of JEE at this link: JEE
Join Course