Magnitude of the vector product

The magnitude of the vector product is given as,

Where a and b are the magnitudes of the vector and Ɵ is the angle between these two vectors. From the figure, we can see that there are two angles between any two vectors, that is, Ɵ and (360° – Ɵ). In this rule, we always consider the smaller angle that is less than 180°.

Direction of the vector product 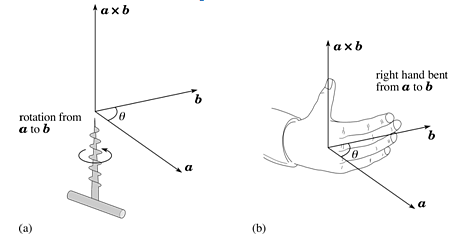 But for vector products

As we know, the magnitude of both the cross products a × b and b × a is the same and is given by absinθ; but the curling of the right-hand fingers in case of a × b is from a to b, whereas in case of (b × a) it is from b to a, as per which, the two vectors are in opposite directions.Mathematically,

Like the scalar product, vector product of two vectors is also distributive with respect to vector addition. Mathematically,

The document Vector Product of Two Vectors - Notes | Study Physics Class 11 - NEET is a part of the NEET Course Physics Class 11.
All you need of NEET at this link: NEET
Attempt Now
Join Course