Q.1. Mention one function of the judiciary. Ans. The judiciary settles disputes.

Q.2. What do you mean by ‘ judicial review’? [Imp.] Ans. The judiciary has the power to strike down particular laws passed by the Parliament if it finds they don’t adhere to Constitution. This is known as judicial review.

Q.4. The seven north-east states have a common High Court. Where is this located? Ans. It is located at Guwahati.

Q.5. What do you mean when you say ‘we have an intergrated judicial system’? [V. Imp.] Ans. It means that the decisions made by higher courts are binding on the lower courts.

Q.6. What do you mean by the appellate system? [Imp.] Ans. It means that a person can appeal to a higher court if they are not satisfied with the judgement of the lower court.

Q.1. What is a Judicial System? What is its role in dispute resolution? Ans. A judicial system is a mechanism of courts that a citizen can approach when a law is violated. It plays a very significant role in resolving dispute between:(i) citizens(ii) citizens and the government(iii) two state governments(iv) the centre and state governments

Q.2. What is an independent judiciary? Explain in brief. [V. Imp.] Ans. The Indian Constitution provides for the independence of the judiciary. It means that other branches of the State such as the legislature and the executive cannot interfere in the work of the judiciary. The courts are not under the government and do not act on their behalf. The courts ensure that there is no misuse of power of the legislature and the executive. Anyone can approach the courts if they find that their Fundamental Rights have been violated.Thus, the courts are not influenced by anyone, not even by the rich and powerful people.

Q.3. What is the structures of the courts in India? [Imp.] Ans. There are three different levels of courts in India. At the lower level, we have subordinate or district courts. These courts hear many kinds of case. At the state level, we have High Courts. There are 21 High Courts in our country. The High Court is the highest authority in a state. At the top in the Supreme Court. It is the foremost judicial in our country. It is located in New Delhi and is presided over by the Chief Justice of India.Thus, the structure of the courts from the lower to the highest level is such that it resembles a pyramid. 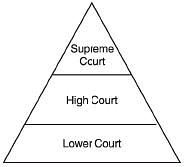 Q.4. Write a brief note on ‘Public Interest Litigation.’ Ans. Public Interest Litigation (PIL) is a mechanism devised by the Supreme Court of India in the early 1980s to increase access to justice. Under this mechanism any individual or organisation is allowed to file a PIL in the High Court or the Supreme Court on behalf of those whose rights are being violated. The legal process that it involves is very simple. Even a letter or telegram addressed to the Supreme Court or the High Court can be treated as a PIL. Thus, PIL plays a very significant role in facilitating justice.

Q.5. In principle, the courts are accessible to all. But what happens in reality? [V. Imp.] Ans. In principle, every citizen has a right to justice through the courts. Here, it is worth mentioning that the courts play a very significant role in protecting our Fundamental Rights. If any citizen finds that their Fundamental Rights are violated, they can approach the court.But things are not the same in reality. Access to courts has always been tough for the poor. These people do not dare to go to the court  because they know that the legal procedures are very lengthy and complicated and involve a lot of money.

Q.1. Describe the different branches of the legal system. How do they differ from one another.[V. Imp.] Ans. Different branches of the legal system are:(a) Civil, and(b) Criminal Civil law deals with matters like money, property, marriage disputes, etc. while criminal law deals with theft, murder, etc. Here are the significant differences between civil law and criminal law.