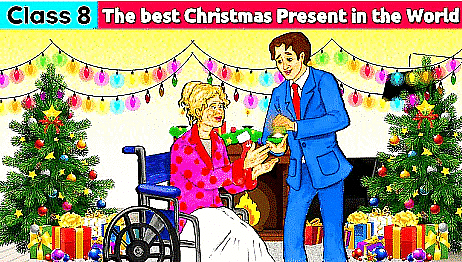 Paragraph 1-3I spotted it in a junk shop in Bridport, a roll-top desk. The man said it was early nineteenth century, and oak. I had wanted one, but they were far too expensive. This one was in a bad condition, the roll-top in several pieces, one leg clumsily mended, scorch marks all down one side. It was going for very little money. I thought I could restore it. It would be a risk, a challenge, but I had to have it. I paid the man and brought it back to my workroom at the back of the garage. I began work on it on Christmas Eve.

I removed the roll-top completely and pulled out the drawers. The veneer had lifted almost everywhere — it looked like water damage to me. Both fire and water had clearly taken their toll on this desk. The last drawer was stuck fast. I tried all I could to ease it out gently. In the end I used brute force. I struck it sharply with the side of my fist and the drawer flew open to reveal a shallow space underneath, a secret drawer. There was something in there. I reached in and took out a small black tin box. Sello-taped to the top of it was a piece of lined notepaper,  and written on it in shaky handwriting: “Jim’s last letter, received January 25, 1915. To be buried with me when the time comes.” I knew as I did it that it was wrong of me to open the box, but curiosity got the better of my scruples. It usually does.

Inside the box there was an envelope. The address read: “Mrs Jim Macpherson, 12 Copper Beeches, Bridport, Dorset.” I took out the letter and unfolded it. It was written in pencil and dated at the top — “December 26, 1914”. 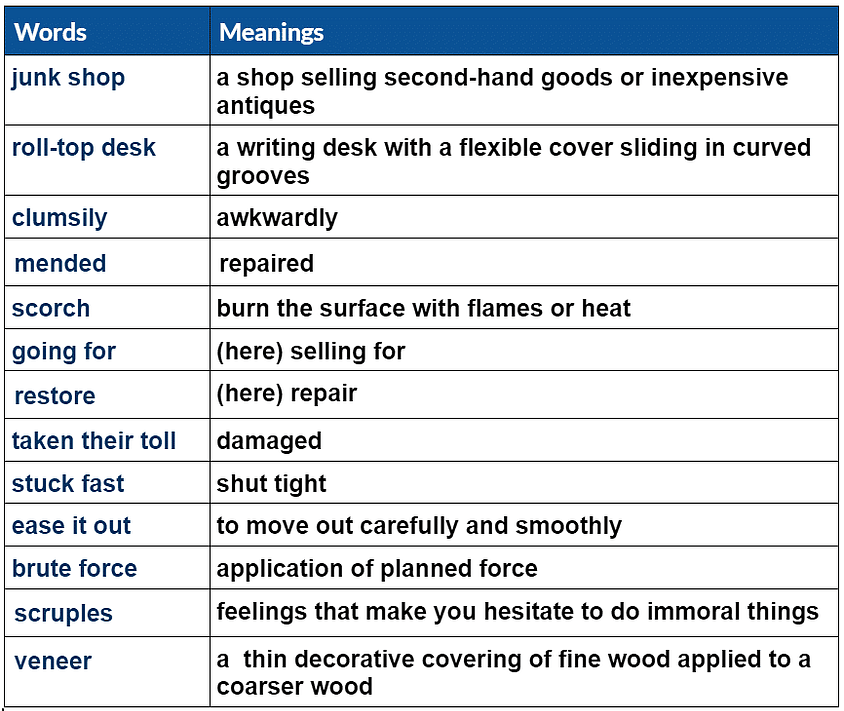 I write to you in a much happier frame of mind because something wonderful has just happened that I must tell you about at once. We were all standing to in our trenches yesterday morning, Christmas morning. It was crisp and quiet all about, as beautiful a morning as I’ve ever seen, as cold and frosty as a Christmas morning should be.

I should like to be able to tell you that we began it. But the truth, I’m ashamed to say, is that Fritz began it. First someone saw a white flag waving from the trenches opposite. Then they were calling out to us from across no man’s land, “Happy Christmas, Tommy! Happy Christmas!” When we had got over the surprise, some of us shouted back, “Same to you, Fritz! Same to you!” I thought that would be that. We all did. But then suddenly one of them was up there in his grey greatcoat and waving a white flag. “Don’t shoot, lads!” someone shouted. And no one did. Then there was another Fritz up on the parapet, and another. “Keep your heads down,” I told the men, “it’s a trick.” But it wasn’t. 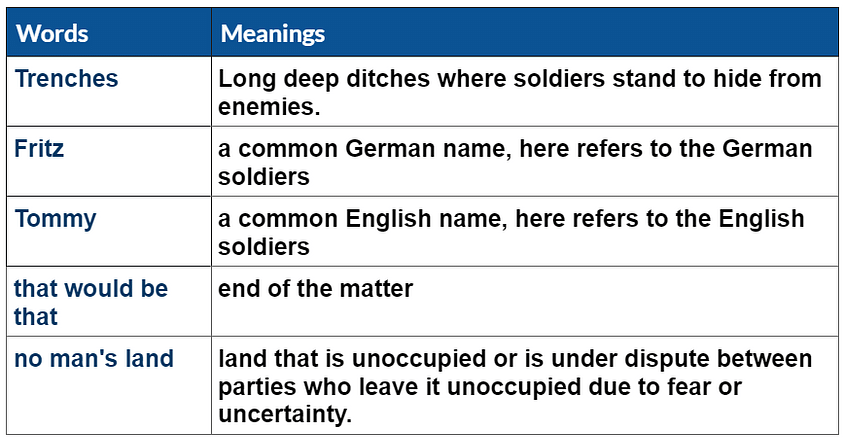 One of the Germans was waving a bottle above his head. “It is Christmas Day, Tommy. We have schnapps. We have sausage. We meet you? Yes?” By this time there were dozens of them walking towards us across no man’s land and not a rifle between them. Little Private Morris was the first up. “Come on, boys. What are we waiting for?” And then there was no stopping them. I was the officer. I should have stopped them there and then, I suppose, but the truth is that it never even occurred to me I should. All along their line and ours I could see men walking slowly towards one another, grey coats, khaki coats meeting in the middle. And I was one of them. I was part of this. In the middle of the war we were making peace.

You cannot imagine, dearest Connie, my feelings as I looked into the eyes of the Fritz officer, who approached me, hand outstretched. “Hans Wolf,” he said, gripping my hand warmly and holding it. “I am from Dusseldorf. I play the cello in the orchestra. Happy Christmas.”

“Captain Jim Macpherson,” I replied. “And a Happy Christmas to you too. I’m a school teacher from Dorset, in the west of England.”

“Ah, Dorset,” he smiled. “I know this place. I know it very well.” We shared my rum ration and his excellent sausage. And we talked, Connie, how we talked. He spoke almost perfect English. But it turned out that he had never set foot in Dorset, never even been to England. He had learned all he knew of England from school, and from reading books in English. His favourite writer was Thomas Hardy, his favourite book Far from the Madding Crowd. So out there in no man’s land we talked of Bathsheba and Gabriel Oak and Sergeant Troy and Dorset. He had a wife and one son, born just six months ago. As I looked about me there were huddles of khaki and grey everywhere, all over no man’s land, smoking, laughing, talking, drinking, eating. Hans Wolf and I shared what was left of your wonderful Christmas cake, Connie. He thought the marzipan was the best he had ever tasted. I agreed. We agreed about everything, and he was my enemy. There never was a Christmas party like it, Connie.

No difficult words in Paragraph 10,11

The time came, and all too soon, when the game was finished, the schnapps and the rum and the sausage  had long since run out, and we knew it was all over. I wished Hans well and told him I hoped he would see his family again soon, that the fighting would end and  we could all go home.

“I think that is what every soldier wants, on both sides,” Hans Wolf said. “Take care, Jim Macpherson. I shall never forget this moment, nor you.” He saluted and walked away from me slowly, unwillingly, I felt. He turned to wave just once and then became one of the hundreds of grey-coated men drifting back towards their trenches.

That night, back in our dugouts, we heard them singing a carol, and singing it quite beautifully. It was Stille Nacht, Silent Night. Our boys gave them a rousing chorus of While Shepherds Watched. We exchanged carols for a while and then we all fell silent. We had had our time of peace and goodwill, a time I will treasure as long as I live.

Dearest Connie, by Christmas time next year, this war will be nothing but a distant and terrible memory. I know from all that happened today how much both armies long for peace. We shall be together again soon, I’m sure of it.

I folded the letter again and slipped it carefully back into its envelope. I kept awake all night. By morning I knew what I had to do. I drove into Bridport, just a few miles away. I asked a boy walking his dog where Copper Beeches was. House number 12 turned out to be nothing but a burned-out shell, the roof gaping, the windows boarded-up. I knocked at the house next door and asked if anyone knew the whereabouts of a Mrs Macpherson. Oh yes, said the old man in his slippers, he knew her well. A lovely old lady, he told me, a bit muddle-headed, but at her age she was entitled to be, wasn’t she? A hundred and one years old. She had been in the house when it caught fire. No one really knew how the fire has started, but it could well have been candles. She used candles rather than electricity, because she always thought electricity was too expensive. The fireman had got her out just in time. She was in a nursing home now, he told me, Burlington House, on the Dorchester road, on the other side of town.

I found Burlington House Nursing Home easily enough. There were paper chains up in the hallway and a lighted Christmas tree stood in the corner with a lopsided angel on top. I said I was a friend come to visit Mrs Macpherson to bring her a Christmas present. I could see through into the dining room where everyone was wearing a paper hat and singing. The matron had a hat on too and seemed happy enough to see me. She even offered me a mince pie. She walked me along the corridor. “Mrs Macpherson is not in with the others,” she told me. “She’s rather confused today so we thought it best if she had a good rest. She has no family you know, no one visits. So I’m sure she’ll be only too pleased to see you.” She took me into a conservatory with wicker chairs and potted plants all around and left me.

The old lady was sitting in a wheelchair, her hands folded in her lap. She had silver white hair pinned into a wispy bun. She was gazing out at the garden. “Hello,” I said. She turned and looked up at me vacantly. “Happy Christmas, Connie,” I went on. “I found this. I think it’s yours.” As I was speaking her eyes never left my face. I opened the tin box and gave it to her. That was the moment her eyes lit up with recognition and her face became suffused with a sudden glow of happiness. I explained about the desk, about how I had found it, but I don't think she was listening. For a while she said nothing, but stroked the letter tenderly with her fingertips.

Suddenly she reached out and took my hand. Her eyes were filled with tears. “You told me you’d come home by Christmas, dearest,” she said. “And here you are, the best Christmas present in the world. Come closer, Jim dear, sit down.”

I sat down beside her, and she kissed my cheek. “I read your letter so often Jim, every day. I wanted to hear your voice in my head. It always made me feel you were with me. And now you are. Now you’re back you can read it to me yourself. Would you do that for me, Jim dear? I just want to hear your voice again. I’d love that so much. And then perhaps we’ll have some tea. I’ve made you a nice Christmas cake, marzipan all around. I know how much you love marzipan.”

The document Vocabulary: The Best Christmas Present in the World - Notes | Study English Class 8 - Class 8 is a part of the Class 8 Course English Class 8.
All you need of Class 8 at this link: Class 8
Attempt Now
Join Course