Characteristics of WatershedsA watershed is a basic unit of hydrological behavior. On the land surface, it is a geographical unit in which the hydrological cycle and its components can be analyzed. Usually a watershed is defined as the area that appears, on the basis of topography, to contribute all the water that passes through a given point of a stream. A watershed embraces all its natural and artificial (man-made) features, including its surface and subsurface features, climate and weather patterns, geologic and topographic settings, soils and vegetation characteristics, and land use (shown in figure 5.1). A watershed carries water “shed” from the land after rain falls and snow melts. Drop by drop, water is channeled into soils, groundwater, creeks, and streams, making its way to larger rivers and eventually the sea. 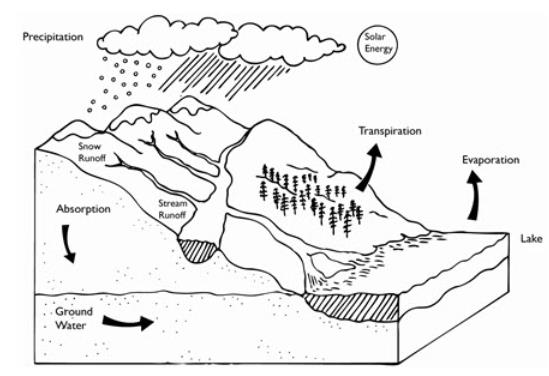 5.2 Classification of WatershedWatersheds can be classified using any measurable characteristics in the area like- size, shape, location, ground water exploitation, and land use. However, the main classification of watershed is discussed broadly on the basis of size and land use. Two watersheds of the same size may behave very differently if they do not have similar land and channel phases. The descriptions of different watershed classifications are as below.5.2.1 Size – The main implication of watershed size appears in terms of spatial heterogeneity of hydrological processes. The spatial variability of watershed characteristics increases with size, therefore, large watersheds are most heterogeneous. As the watershed size increases, storage increases. Based on size, the watersheds are divided into three classes.

5.2.1.1 Small Watersheds: Small watersheds are those, where the overland flow and land phase are dominant. Channel phase is relatively less conspicuous. The watershed is highly sensitive to high-intensity and short-duration rainfalls.

5.2.1.2 Medium Watersheds: Being medium in size, the workability in these watersheds are easy due to accessible approach. Rather than size, shape of the watershed plays a dominant role. Overland flow and land phase are prominent.

5.2.1.3 Large Watersheds: These watersheds are less sensitive to high-intensity-rainfalls of short duration. The channel networks and channel phase are well-developed, and, thus, channel storage is dominant.

5.2.2 Land Use – Land use defines the exploitation (natural and human interactions) characteristics of watersheds which affect the various hydrological processes within the watershed. The watershed classification based on the land use can be given as below.

5.2.2.1 Agricultural Watershed: Agricultural watershed is the watershed in which agricultural activities (crop cultivation) is dominant. It experiences perhaps the most dynamically significant land-use change. This usually leads to increased infiltration, increased erosion, and/or decreased runoff. Depression storage is also increased by agricultural operations. When the fields are barren, falling raindrops tend to compact the soil and infiltration is reduced. There is lesser development of streams in agricultural watersheds. The small channels formed by erosion and runoff in the area are obliterated by tillage operations. The soil structure is altered by regular application of organic and/or inorganic manure.  This, in turn, leads to changed infiltration characteristics.

5.2.2.2 Urban Watershed: These are the watershed areas having maximum manipulation for the convenience of human being. These are dominated by buildings, roads, streets, pavements, and parking lots. These features reduce the infiltrating land area and increase imperviousness. As drainage systems are artificially built, the natural pattern of water flow is substantially altered. For a given rainfall event, interception and depression storage can be significant but infiltration is considerably reduced. As a result, there is pronounced increase in runoff and pronounced decrease in soil erosion. Thus, an urban watershed is more vulnerable to flooding if the drainage system is inadequate. Once a watershed is urbanized, its land use is almost fixed and its hydrologic behavior changes due to changes in precipitation.

5.2.2.3 Mountainous Watershed: Because of higher altitudes, such watersheds receive considerable snowfall. Due to steep gradient and relatively less porous soil, infiltration is less and surface runoff is dominantly high for a given rainfall event. The areas downstream of the mountains are vulnerable to flooding. Due to snow melt, water yield is significant even during spring and summer.

5.2.2.4 Forest Watershed: These are the watersheds where natural forest cover dominates other land uses. In these watersheds, interception is significant, and evapotranspiration is a dominant component of the hydrologic cycle. The ground is usually littered with leaves, stems, branches, wood, etc. Consequently, when it rains, the water is held by the trees and the ground cover provided greater opportunity to infiltrate. The subsurface flow becomes dominant and there are times when there is little to no surface runoff. Because forests resist flow of overland water, the peak discharge is reduced. Complete deforestation could increase annual water yield by 20 to 40 %.

5.2.2.5 Desert Watershed: There is little to virtually no vegetation in desert watersheds. The soil is mostly sandy and little annual rainfall occurs. Stream development is minimal. Whenever there is rainfall, most of it is absorbed by the porous soil, some of it evaporates, and the remaining runs off only to be soaked in during its journey. There is limited groundwater recharge due to occurrence of less rainfall in these watersheds.

5.2.2.6 Coastal Watershed: The watersheds in coastal areas may partly be urban and are in dynamic contact with the sea. Their hydrology is considerably influenced by backwater from wave and tidal action of the sea. Usually, these watersheds receive high rainfall, mostly of cyclonic type, do not have channel control in flow, and are vulnerable to severe local flooding. In these watersheds, the water table is high, and saltwater intrusion threatens the health of coastal aquifers, which usually are a source of the fresh water supply.

5.2.2.7 Marsh or Wetland Watershed: Such lands are almost flat and are comprised of swamps, marshes, water courses, etc. They have rich wildlife and plenty of vegetation. As water is no limiting factor to satisfy evaporative demand, evaporation is dominant. Rainfall is normally high and infiltration is minimal. Most of the rainfall becomes runoff. The flood hydrograph peaks gradually and lasts for a long time.

5.2.2.8 Mixed Watershed: These are the watersheds, where multiple land use/land cover exists either because of natural settings or due to a combination of natural and human interaction activities. In these watersheds, a combination of two or more of the previous classifications occurs and none of the single characteristics dominate the area. In India, most of the watersheds are of mixed nature of characteristics, where agriculture, forest, settlements (urban and rural) etc. land use occurs.

Basin shape is reflected by a number of watershed parameters as are given below.

The quantification of these physical and geomorphologic properties of watershed/basin are important for estimating the watershed hydrologic processes.

5.4.1.1 Basin Area: The area of watershed is also known as the drainage area and it is the most important watershed characteristic for hydrologic analysis. It reflects the volume of water that can be generated from a rainfall. Once the watershed has been delineated, its area can be determined by approximate map methods,   planimeter or GIS.

Basin area is defined as the area contained within the vertical projection of the drainage divide on a horizontal plane. Watershed area is comprised of two sub-components; Stream areas and Inter-basin areas. The inter-basin areas are the surface elements contributing flow directly to streams of order higher than 1. Stream areas are those areas that would constitute the area draining to a predetermined point in the stream or outlet. For example, the stream area for first-order streams would be delineated by measuring the drainage area for each first-order channel. Horton (1945) inferred that mean drainage areas of progressively higher orders might form a geometric sequence. This characteristic was formulated as a law of drainage areas. 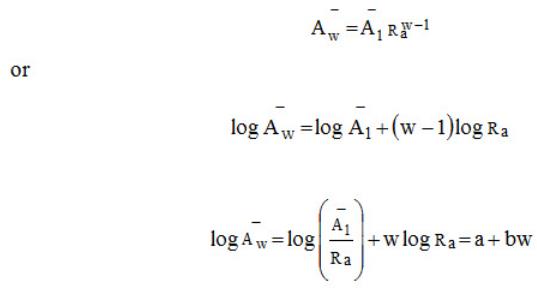 Basin length, Lb, is the longest dimension of a basin parallel to its principal drainage channel and Basin width can be measured in a direction approximately perpendicular to the length measurement. The relation between mainstream length and drainage-basin area for small watershed is given below; where Lb is in km and A in km2. Lb = 1.312 A0.568

5.4.1.3 Basin Slope: Watershed/basin slope affects the momentum of runoff. It reflects the rate of change of elevation with respect to distance along the principal flow path. It is usually calculated as the elevation difference between the endpoints of the main flow path divided by the length. The elevation difference may not necessarily be the maximum elevation difference within the watershed since the point of highest elevation may occur along a side boundary of the watershed rather than at the end of the principal flow path. If there is significant variation in the slope along the main flow path, it may be preferable to consider several sub-watersheds and estimate the slope of each.

Basin slope has a profound effect on the velocity of overland flow, watershed erosion potential, and local wind systems. Basin slope S is defined as

where h = fall in meters, and L = horizontal distance (length) over which the fall occurs.

5.4.1.4 Basin Shape: Basin shape is not usually used directly in hydrologic design methods; however, parameters that reflect basin shape are used occasionally and have a conceptual basis. Watersheds have an infinite variety of shapes, and the shape supposedly reflects the way that runoff will “bunch up” at the outlet. A circular watershed would result in runoff from various parts of the watershed reaching the outlet at the same time. An elliptical watershed having the outlet at one end of the major axis and having the same area as the circular watershed would cause the runoff to be spread out over time, thus producing a smaller flood peak than that of the circular watershed. A number of watershed parameters have been developed to reflect basin shape. Form factor, shape factor, circularity ratio, elongation ratio, and compactness coefficient are the typical parameters; important in defining the shape of a watershed/basin; and are discussed as below.

5.4.1.5 Form Factor: The area of the basin divided by the square of axial length of the basin; where value < 1

5.4.1.6 Shape Factor: The drainage area divided by the square of the main channel length; where value > 1

5.4.1.7 Circularity Ratio: The ratio of basin area to the area of a circle having the same perimeter as the basin; where value £ 1

5.4.1.8 Elongation Ratio: The ratio of the diameter of a circle of the same area as the basin to maximum basin length; where value £ 1

Compaction Coefficient: The perimeter of the basin divided by circumference of equivalent circular area; where value ³ 1

The basin geomorphology plays an important role in the transition of water from the overland region to channels (streams) and also from the channel of one order to the other. It is easily determined by contour map and drainage map of the basin. Channel order, channel length, channel slope, channel profile, and drainage density are the most common channel characteristics, important in estimating the watershed hydrological processes and are discussed as below. where Nw = number of streams of order w; W = order of the watershed; and Rb = Bifurcation Ratio varies between 3 and 5. This law is an expression of topological phenomenon, and is a measure of drainage efficiency.

5.4.2.3 Channel Slope: The channel slope is determined as the elevation difference between the endpoints of the main channel divided by the channel length.

where L = Total length of all channels of all orders, A = Area; W = Basin order; Nw = No. of basin of different order.

Where Dd basically describes the average distance between streams and L0 approximates the average length of overland flow from the divides of the stream channels.