For the case of a pumped well located in an unconfined aquifer (Figure 10) the steady state discharge conditions are similar to that of confined aquifer. 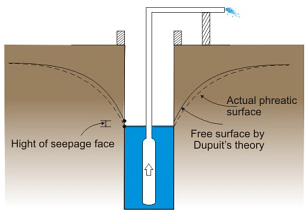 The flow at radial distance r from the well is given by the following equation under the simplifying assumptions made by Dupuit.

Where h denotes the height of the water take at a distance r above a datum, which may be the bedrock. Integrating between the limits of rw and r1

By knowing the values of the water table at two places located at distances r1 and r2 from the centre of the well with corresponding heads h1 and h2 the value of the coefficient of permeability K  can be worked out from the equation.

The water table head at any radial distance r can also be expressed in terms of H, the head at undisturbed initial water table before pumping as:

In the above expression, R is the radius of influence of the radial distances where the water table head is nearly equal to H.

Since (9) was derived with Dupuit’s assumption, the actual free surface will be slightly higher than the predicted free surface.  This is because the gradient of the cone of depression is larger towards the well where the curvature of streamlines is most marked.  The free surface of water table will actually meet the periphery of the well at some height above the water level in the well as shown in Figure 10.

When a well starts pumping out water at constant rate, the potentimetric surface gradually gets lowered. The unsteady state representation of the potential head in such a case is given by the following expression,

Where h is the potential head at a distance from the well at a time t; S is the Storativity and T is the Transmissivity. The boundary and initial conditions are defined as follows:

A solution of (13), based on the boundary and initial conditions, was given by Theis as in the following equation. Interested readers may refer to text books on ground water for further details.

In equation (15), H–h is the drawdown at any radial distance r, measured from the centre of the well. The infinite series term in the equation is generally designated as W(u), and in textbooks on well hydraulics as Raghunath (1998), these are tabulated for ease of calculation.  However, with the help of calculators, it is easy to evaluate the first three terms and for practical calculations, only the first three or four terms may be considered.  If only the first two terms are taken, then the expression simplifies to:

As with confined aquifers, the decline in pressure in the aquifer yields water because of the elastic storage of the aquifer Storativity (Ss). The declining water table also yields water as it drains under gravity from the sediments.  This is termed as specific yield (sy).  The flow equation has been solved for radial flow in compressible unconfined aquifers under a number of different conditions and by use of a variety of mathematical methods.  It is not in the scope of the present text to discuss these methods.  The interested reader may refer to textbooks on well hydraulics, for examples “Ground Water” by H.M. Raghunath, New Age International (P) Ltd, Publishers.

The hydraulic properties of a confined aquifer are often required to be known and the equations discussed in Section can be used if measurements of water levels at known value of the discharge rate.

If the observations correspond to equilibrium conditions, then two observation wells, data may be used along with equation (6), to yield

Where T is the Transmissivity of the confined aquifer and h1 and h2 are the depth of piezometric heads at two observation wells located at radial distance r1 and r2 respectively from the pumping well centre.

For non-equilibrium conditions, equation (19) would yield:

Where S1 and S2 are the draw downs in an observation well at a radial distance r from the pumping well – centre at times t1 and t2.

Having known T, the Storativity S of the aquifer may be determined using (13).

Design of wells for water supply

A well is an intake structure dug on the ground to draw water from the reservoirs of water stored within.  The water from the well could be used to meet domestic, agricultural, industrial, or other uses.  The structure may be an open dug well, or as is common these days, may be tube-wells.  The well may be shallow, tapping an unconfined reservoir or could be deep, penetrating further inside the ground to tap a confined aquifer located within aquicludes. In this lesson, we shall discuss the design of tube wells, a typical installation of which is given in Figure 11. 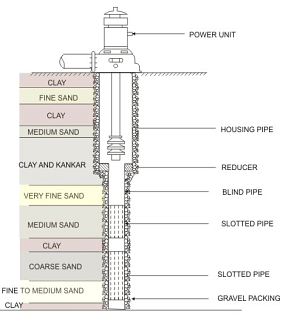 Design of a well involves selecting appropriate dimensions of various components and choosing proper materials to be used for its construction. A good design of tube well should aim at efficient utilisation of the aquifer, which it is supposed to tap, have a long and useful life, should have a low initial cost, and low mantenace and operation cost. The parameters that need to be designed for a well include the following:

The size of the well screen slots depends upon the gradation, and size of the formation material, so that there is no migration of fines near the slots. In case of naturally developed wells the slot size is taken as around 40 to 70 percent of the size of the formation material. If the slot size selected on this basis comes to less than 0.75 mm, then an artificial ground pack is used.  An artificial gravel pack is required when the aquifer material is homogeneous with a uniformity coefficient less than 3 and effective grain size less than 0.25 mm.

The screen diameter is determined so that the entrance velocity near the well screen does not exceed 3 to 6 cm/sec.

The entire process of installation of tube wells include drilling of a hole, installing the screen and housing pipes, gravel packing and development of the well to insure sand free water. Depending on the size of the tubewell, depth and formation to be drilled, available facility and technical know-how, different methods are used for the construction of tubewells. Two methods that are commonly used are explained below. 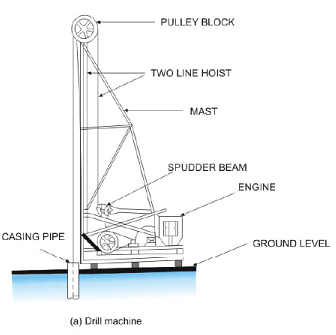 The cutting tool is suspended from a cable and the drilling is accomplished by up and down movement (percussion) of the tool.  A full string of drilling tool consists of four components

The drill bit is used to loosen the formation material and its reciprocating action breaks it down to smaller particles or muck. Water injected from the top converts the muck into slurry.  For this purpose water is added as long as drilling continues in dry formations.  The slurry flows up due to the pressure of water.  The drill stem fixed just above the bit provides additional tools in order to maintain a straight line.  The drilling jars consist of a pair of linked steel bars and can be moved in a vertical direction relative to each other. The rope socket connects the string of tools to the cable. 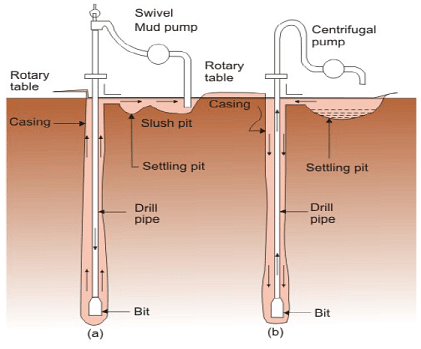 The rotary drilling method, also sometimes called the hydraulic rotary method of drilling, uses continuously circulating pumped fluid.  The power to the drill bit is delivered to the bit by a rotating hallow steel pipe or drill pipe.  The drilling fluid or bentonite slurry is pumped down through the drill pipe and out through a nozzle in the drill bit.  The mud then rises to the surface through the hole and also removes the drilled formation material or muck.  At the surface the fluid is led to a setting pit and then to a storage pit from where it is pumped back into the hole.  Water and clay are added to the storage in to maintain quantity and consistency.

For installation of well screens, different methods are used depending upon the design of the well, the type of well, locally available facility and the type of problems encountered in drilling operation. The Pull-back method is generally used with the cable-tool percussion method of well drilling. After the casing pipe has reached to the depth where the bottom of the screen is to be located, the sand that might have flowed into the pipe is removed.  The well assembly consisting of screen and blind pipe lengths is lowered into the well.  A heavy plate bail handle is provided at the bottom of the screen.  The lowering of the assembly may be accomplished by suspending it by the bail handle using a flat hook attached to the sand line to engage the bail. After lowering the complete well screen assembly inside the casing pipe, the casing rip is pulled back.

For rotary drilled wells generally the Open-Hole method of screen installation used, though the Pull–Back method can also be used in this case too. In the open-hole method, after drilling the hole below the well caring, the drill stem is withdrawn and a telescope–size screen is lowered into the hole by any suitable method. The depth of the hole should be checked such that when the screen rests on the bottom of the hole, the lead packer should remain inside the lower end of the casing.

Well can either manually ground packed or artificially ground packed. Natural ground packed condition is created by removing the fine sand from the formation either by pumping or by surging. An artificially gravel packed well has a envelop of specially grand sand or gravel placed around the well screen. Ground pack is designed on the basis of sieve analysis of the aquifer materials obtained during drilling.  Aquifer consisting of coarse materials of less uniform sizes may not require any gravel pack.

This process is used to remove sand, silt and other fine materials from a zone immediately surrounding the well screen.  This is done by flow reversal through the screen openings so as to rearrange the formation particles in a naturally developed well and form a graded filter with materials of increasing porosity and permeability towards the well in an artificially gravel packed well, so that ultimately the well will yield clear sand free water.