JEE : What is Electroplating? Notes | EduRev

The document What is Electroplating? Notes | EduRev is a part of the JEE Course Chemistry for JEE.
All you need of JEE at this link: JEE Fig: ElectroplatingElectroplating is the process through which one metal is plated to another metal through hydrolysis. It is usually done for decorative purposes along with prevention of corrosion of metals. There are certain specific types of electroplating like copper plating, chromium plating and silver plating.The manufacturers get the benefit of electroplating since they can easily use inexpensive metals like zinc and steel for the majority of the product and then electroplate different metals on outside for appearance, protection and achieving the other desired properties for the product. The surface can be plastic or even a metal.The process of electroplating includes using an electrolytic cell which consists of applying a negative charge to the metal and dipping it in a solution containing metal salt i.e. electrolytes which is full of positively charged metal ions.Attraction between the two metals occurs owing to the positive and the negative charges.The process of electroplating was first discovered by Luigi Brugnatelli in 1805. He electroplated the gold by using the electrode position process.CHOOSING THE ELECTROLYTES AND PREPARING THE SURFACE:Determining the right electrolyte for electroplating is important to maintain the quality of plating. Some of the electrolytes used are acids, metal salts, bases or molten salts. While choosing the correct type of electrolyte, it is important to keep certain things in the mind. They are corrosion, brightness, reflectivity, resistance, hardness, ductility, mechanical strength and wear resistance.The surface is prepared before starting to plate another metal on it is to make sure that the surface is clean and free from the contaminants which can interfere in the bonding. Due to contamination, lack of adhesion happens along with no deposition. The surface is prepared in three steps by cleaning it with solvents, treatment (surface modification where there is hardening of parts and application of metal layers) and rinsing.USES OF ELECTROPLATING: 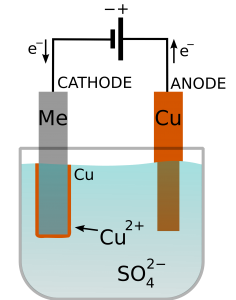