Q.1. What do you understand by law?

Law is a system of rules that are created and enforced through social or governmental institutions to regulate behavior.

Q.2. What is the appellate system?

This means that a person can appeal to a higher court if they believe that the judgment passed by the lower court is not just.

Q.3. In what ways is the Supreme Court, the guardian of Fundamental Rights?

Supreme Court acts as a guardian of fundamental rights as it ensures that people are able to practice their rights in the required manner. Every citizen of India can approach the Supreme Court or the High Court if they believe that their Fundamental Rights have been violated.

In India, we have an integrated judicial system, meaning that the decisions made by higher courts are binding on the lower courts. Another way to understand this integration is through the appellate system that exists in India. This means that a person can appeal to a higher court if they believe that the judgment passed by the lower court is not just.

Q.5. What is Public Interest Litigation in India?

Q.6. Write a brief note on the independence of the judiciary.

One aspect of this independence is the ‘separation of powers’. This means here is that other branches of government – the legislature and the executive – cannot interfere in the work of the judiciary. The courts are not under the government and do not act on their behalf. All judges in the High Court as well as the Supreme Court are appointed with very little interference from these other branches of government. Once appointed to this office, it is also very difficult to remove a judge.

Q.7. What is the structure of the judicial system of India?

There are three different levels of courts in our country. There are several courts at the lower level while there is only one at the apex level. The courts that most people interact with are what are called subordinate or district courts. These are usually at the district or Tehsil level or in towns and they hear many kinds of cases. Each state is divided into districts that are presided over by a District Judge. Each state has a High Court which is the highest court of that state. At the top is the Supreme Court that is located in New Delhi and is presided over by the Chief Justice of India. The decisions made by the Supreme Court are binding on all other courts in India.

Q.8. What does judiciary mean?

The judiciary is the branch of authority in a country which is concerned with law and the legal system.

Q.9. What is the Role of the Judiciary?

Broadly speaking, the work that the judiciary does can be divided into the following:

Dispute Resolution: The judicial system provides a mechanism for resolving disputes between citizens, between citizens and the government, between two state governments and between the centre and state governments.Judicial Review: As the final interpreter of the Constitution, the judiciary also has the power to strike down particular laws passed by the Parliament if it believes that these are a violation of the basic structure of the Constitution. This is called judicial review.Upholding the Law and Enforcing Fundamental Rights: Every citizen of India can approach the Supreme Court or the High Court if they believe that their Fundamental Rights have been violated.

Q.10. Re-read excerpts from the judgment on the Olga Tellis vs Bombay Municipal Corporation case. Now write in your own words what the judges meant when they said that the Right to Livelihood was part of the Right to Life.

Q.11. Keeping the Sudha Goel case in mind, tick the sentences that are true and correct the ones that are false.(i) The accused took the case to the High Court because they were unhappy with the decision of the Trial Court.(ii) They went to the High Court after the Supreme Court had given its decision.(iii) If they do not like the Supreme Court verdict, the accused can go back again to the Trial Court.

Independent judiciary is essential to democracy because(i) It allows the courts to work independently, without being under the influence of the rich and powerful people or other branches of the state like – the legislature and the executive.(ii) The court can play a crucial role in protecting the Fundamental Rights of the  citizens as well as enforce the rule of law.

Q.13. In the following illustration, fill in each tier with the judgments given by the various courts in the Sudha Goel case. Check your responses with others in class. 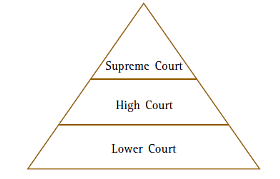 Q.14. How can we say that Indian Judiciary is independent?

Indian judiciary is considered an independent institution because:(i) The other branches of government – the legislature and the executive – cannot interfere in the work of the judiciary.(ii) The courts are not under the government and do not act on their behalf.

Q.15. How is the work of the judiciary categorized?

The work that the judiciary does can be divided into the following:(i) Dispute Resolution(ii) Judicial Review(iii) Upholding the Law and Enforcing Fundamental Rights.