The document Worksheet - Verb Notes | EduRev is a part of the Class 7 Course English An Alien Hand Class 7.
All you need of Class 7 at this link: Class 7

1. Verb - The verb is a word that expresses some action, feeling or existence. It tells us something about the subject.Examples:
(a) Lions roar. (action)
(b) Boys fly kites. (action)
(c) I feel sorry. (feeling)
(d) Ashoka was a great king. (existence)2. Main Verbs
All the verbs (shown above in black) ‘roar’, ‘fly’, ‘feel’, and ‘was’, are limited by  the number and person of their subjects. Therefore, ‘roar’, ‘fly’, ‘feel’, and ‘was’, are Main Verbs—main verbs are also called Finite Verbs.3. Verbs are divided in two parts:
(a) Main Verbs (also called lexical verbs)
(b) Helping Verbs (Auxiliaries—Primary and Modals)
All verbs in English except the 24 helping verbs are main verbs.Look at the chart below : 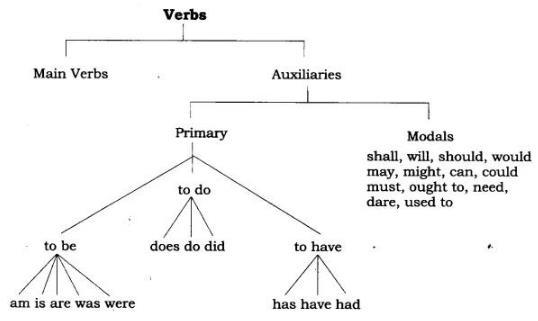 Main Verbs are also of two kinds:(i) Finite verbs
(ii) Non-finite verbs(i) Finite - verbs change their forms according to the person and number of the subject and the tense also.Examples:
(a) He reads. I read.
(b) They read. She goes.
(c) I go.
(d) They go.
(ii) Non-finite - verbs do not change their forms according to the number, person or tense of the subject. The infinitives, gerunds and participles are called non-finites.4. Read the following sentences
(a) Lata sang a song.
(b) I wrote a letter.
(c) Children like sweets.
In each of these sentences the verb takes an object ‘song’, ‘letter’ and ‘sweets’ are objects. A verb that takes an object is called a Transitive Verb. The object usually answers the question what ? Or whom ?
Now look at the following sentences:
(a) Birds fly.
(b) The sun shines.
These verbs do not require objects. They express the actions by themselves and make the sense complete. They are called Intransitive Verbs. Some Verbs can be used both Transitively and Intransitively.

THE CONJUGATION OF VERBS

To Conjugate a Verb means to give its four Principal forms:

If the Past or Past Participle is formed from the Present Tense by changing the Vowel of a Verb.Examples:
(a) Take, took, taken and do, did, done
(b) The Verb is said to be a Strong Verb.
(c) If the Verb requires the addition of ‘ed\ ‘cf or ‘f to form their Past and Past
(d) Participles, they are called Weak Verbs as - Finish, finished, finished ; die, died, died and build, built, built.Group I (Where no ‘n’ is added to the Past Participle)

Note: Since the Present Participle is only the—ing form of the Present, we are giving below pnly the first three forms.

The Present, Past and Past Participle forms of the following weak Verbs are alike:

The Present and Past Participle forms of certain verbs are alike.

Mark the difference between the following groups of Verbs.

Q.1. Read the statements given below and choose the correct option
I. Identify as directed:
(i) The transitive verbs:
(a) I read.
(b) The child sleeps
(c) I read a book.
(d) She weeps
Ans. (c) I read a book.