Which of the following regions/presidencies did not participate in the revolt of 1875?

Select the answer from the codes given below

Who wrote the following passage?

“In no instance is a friendly glance directed to the white man ‘s carriage....Oh! that language of the eye, who can doubt? Who can misinterpret it?”

Which tribe revolted due to British efforts to suppress the practice of human sacrifice?

Assertion (A) : Lord Baden Powell after a private visit to India lifted the colour bar and admitted Indians into his worldwide organisation

Reason (R) : The Seva Samiti Boy Scouts Association merged itself with the Baden-Powell organisation after the latter removed the colour bar on Indians.

In the context of the above two statements which one of the following is correct?

The Tamil Journal “Kudi Arasu” was founded by

What is the correct chronological sequence of the following events?

Select the answer from the codes given below.

The Trades Dispute Act of 1929 provided for :

The one major result of the processes of depeasantisation was: 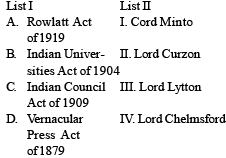 Given below are two statements — one labelled as Assertion (A) and the other labelled as Reason (R) :

Assertion (A) : Gandhi's 11 point ultimatum to Lord lrwin in January 1930 was considered by many Congressmen as a sad climb down from the Poorna Swaraj resolution.

Reason (R) : It included among others the demand for only “Dominion Status” and not complete independence 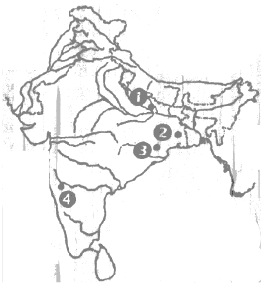 Which of the following Con gress leaders became the president of the All India States People Conference in 1939?