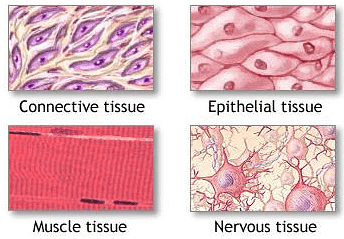 Epithelial TissueThese are the simplest of all animal tissues that form lining of various internal organs and also cover the surface of the body, one side of the cells is in contact with the basement membrane while the other surface is in contact with the atmosphere either directly (as in skin) or indirectly (as in lungs and alimentary canal). There is no blood or lymph supply to the epithelial tissues, however, nerve supply is present.

Connective TissuesA connective tissue serves to bind the other tissues and organs and also support the body. In its matrix are present different types of fibres and cells. It originates from loose mesodermal cells (mesenchyme cells) with fine protoplasmic projections. A connective tissue performs the following functions in our body: 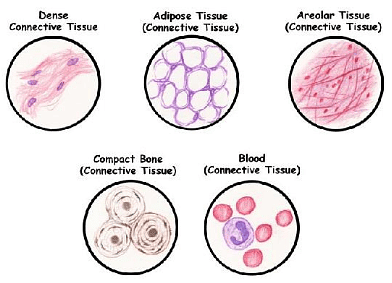 Muscular TissuesThe cells of a muscular tissue contract in response to a given stimulus and then relax back to their original form and shape. This property of the muscular tissue is known as contractibility. These cells do not expand. The muscular tissue brings about movement and locomotion of various organs and parts of the body. The muscle cells are called as fibers as they are thin and elongated. In our body, there are mainly three types of muscular tissues: voluntary, involuntary and cardiac.

In higher animals, the cells which make up the nervous tissue are highly specialised for receiving and conducting the messages or informations from one part of the body to another. Any change in the atmosphere or inside the body acts as a stimulus. For a given stimulus, these cells can be excited and this excitement is passed along the nerve fibers to the specific organs. Therefore, excitability and conductivity are the two fundamental properties of nervous tissue.Nervous Tissue

Fig. Human skeleton systemThe rigid frame of the animal is called skeleton. Two types of skeletons are:Exoskeleton and Endoskeleton.
Exoskeleton forms the outer covering of the skin and other soft parts like hairs, nails, scales, feathers etc.Endoskeleton forms the inner framework of the body and consists of bones and cartilages. In some lower vertebrates like sharks and rays (fishes), the entire endoskeleton is of cartilage. However, most forms have both bones & cartilage. The skeletal system of man consists of 206 bones.

Functions of Skeletal SystemIt provides a kind of frame work for the body. It provides shape and posture to the body. It provides protection to some of the inner delicate organs like brain, spinal cord and lungs. It gives rigid surface for the attachment of muscles with the help of tendons. It helps in locomotion. The bone marrow serves as the centre for the production of red blood cells. The movements of ribs and sternum help in breathing. In the ear, the sound vibrations are conveyed from the tympanum to the internal ear by a set of three bones as in man. It helps the body to be an integrated unit. It serves to store various ions like calcium and phosphate which are then released into the body at the time of need. These minerals perform various functions of the body.

Integumentary SystemThe term integument is applied to the skin and its derivatives. It is the outer most covering of the body remains attached to the underlying muscles by connective tissue and it is frequently freely movable by the muscles. The skin has two layers—outer (Epidermis) and (inner Dermis). 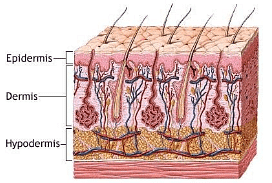 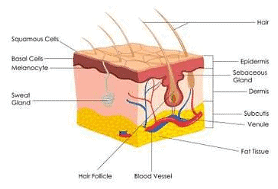 ChromatophoresColour of the skin is due to the pigment cells called chromatophores located in the upper part of dermis. These are typically stellate in form and contain numerous granules. These are of following types: 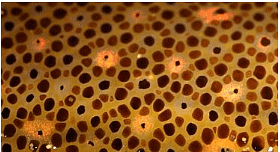 Melanophores—Contain dark brown or black pigment called melanin. Found in epidermis of man.Erythrophores—Contain red granules.Lipophores—Contain yellow pigment.Guanophores or Iridophores — Contain no pigment but tiny crystals (Guanine) which by light reflection may alter the effect of the pigment materials.

Dentition and Salivary Glands - The arrangement of teeth is known as dentition. The dentition may be of the following types:

(A) Based on the succession of teeth:Polyphyodont—When teeth can be replaced an indefinite number of times during life. For example, lower vertebrates.Diphyodont—When teeth develop during life in two successive sets, first set is called deciduous, lacteal or milk teeth, later on these are replaced by second set called permanent teeth. 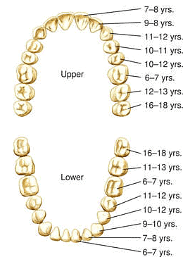 Fig. humans are example of diphyodont

(B) Based on the kind of teeth: Incisors—Curved, long and sharp edged. Help for seizing, cutting, cropping, biting and gnawing. They are variously modified.Gnawing—in Rodents and Lagomorphs.Combing—in Lemurs.Tusks—in elephants, upper incisors modified as tusks.Totally Absent—in sloths.Absent in upper jaw—in ox.Canines—Elongated, conical, sharp. Help in piercing and tearing the food as well as for defence and offence. Often large sized in males.Tearing food—in carnivores.Absent—in Rodents, Lagomorphs, some ungulates.Premolars and Molars (Check teeth)—They both help in crushing, chewing and grinding. In carnivores last upper premolars and first lower molars are specialized and are called carnassial teeth, for cracking bones etc.

On the tongue of man there are different types of papillae such as filiform, fungi form and circumvallate types.

Three pairs of salivary glands open into the mouth cavity:

Parotid gland — It is located below and in front of the ear. Its duct opens on the inside of the cheek, opposite upper second molar tooth; the duct is called Stensen’s duct.

Submaxillary gland—It is located in the posterior part of the floor of mouth. Its duct opens on the floor of the mouth cavity at the sides of the frenum and is known as Wharton’s duct.

Sublingual gland—It is located in the anterior part of the floor of mouth cavity below the tongue. Several ducts of this gland open into the floor of the mouth.

The salivary glands produce saliva, a watery but viscous fluid that contains mucin and two hydrolytic enzymes, ptyalin and maltase, which act upon carbohydrates.Saliva is useful in several other ways. It keeps the mouth moist and aids speech. It cleanses the mouth cavity and removes unwanted particles.

Mumps is an acute virus infection of the parotid salivary glands characterized by swelling of the glands. It becomes difficult to open the mouth and swallow. The mouth also falls short of saliva.

Muscular SystemMuscular System plays a key role in the life of animal. In addition to locomotion, muscles perform a number of significant functions associated with digestion, respiration, circulation, excretion and reproduction. Muscles also help in maintaining a particular posture of the animal. They are of the following main types:

Smooth or Visceral or Involuntary or Unstriated or Unstriped muscles—Occur in internal or visceral organs (digestive tract, arteries, veins etc.); slow to contract; contraction and relaxation is partly controlled by autonomic nervous system.

Skeletal or Striated or Striped or Voluntary muscles—Occur in body wall and limbs as well as in some internal organs (tongue, pharynx and beginning of the oesophagus); contract most rapidly and vigorously; mainly attached to bones or tendons thus mainly responsible for movements of skeleton.

Cardiac or Heart muscles—They are available in heart only; they are involuntary. Contraction is not under the control of will; they are supplied by both sympathetic and parasympathetic nerves.

Tendon—A tough inelastic cord attaching a muscle to the sheath of a bone so that contraction of the muscle can bring about movement of the bone. They are largely made of white collagen fibres.

Ligament—A strip of elastic tissue holding two bones together at a joint.Tetanus—It is a sustained contraction of muscle produced by the fusion of twitches.Fatigue—If a muscle is stimulated repeatedly at intervals not close enough to produce tetanic contraction, it does not contract. The muscle which does not respond to stimuli at all, is said to be in a state of fatigue. This is due to accumulation of lactic acid in the muscle.