The document Basic Concepts of Three Dimensional JEE Notes | EduRev is a part of the JEE Course Mathematics (Maths) Class 11.
All you need of JEE at this link: JEE

Distance Between Two PointsLet P and Q be two given points in space. Let the co-ordinates of the points P and Q be

with respect to a set OX, OY, OZ of rectangular axes.

internally in the ratio m1 : m2. Let OX, OY, OZ be a set of rectangular axes.The position vectors of the two given points

Centroid Of A Triangle:

Let ABC be a triangle. Let the co-ordinates of the vertices A, B and C be

respectively. Let AD be a median of the ΔABC. Thus D is the mid point of BC.

Centroid Of A Tetrahedron :

Let ABCD be a tetrahedron, the co-ordinates of whose vertices are

be the centroid of the face ABC of the tetrahedron. Then the co-ordinates of

This is the required locus of P.

But on xy-plane, the z co-ordinate of R is zero

Ex.3 ABCD is a square of side length ‘a’. Its side AB slides between x and y-axes in first quadrant. Find the locus of the foot of perpendicular dropped from the point E on the diagonal AC, where E is the midpoint of the side AD. 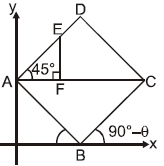