Basin irrigation is a class of surface irrigation methods in which area is divided into number checks or basins.34.1 General AdoptabilityBasin irrigation design is simpler than either furrow or border design since tail water is prevented fromthe existing field and the slopes are usually very small or zero. Thus, recession and depletion are accomplished at the same time and nearly uniform over the entire basin. Because longitudinal and transverse slopes are small or zero, the driving force in the flow is limited to the hydraulic slope of the water surface. Consequently, the uniformity of the field surface topography is critically important.Check basin irrigation is suited for smooth gentle and uniform land slopes and for soils having moderate to low infiltration rates. Steep slopes require complex layouts and heavy land levelling. Both row crops and close-growing crops are adopted to be used with basins as long as the crop is not affected by temporary inundation or is planted in raised beds so that it will remain above the water level. The method is specially adopted for irrigation of grain and fodder crops in heavy soils where water is absorbed slowly and is required to stand for a relatively long time to ensure adequate irrigation.Check basins are useful when leaching is required to remove salts from the soil profile. The method enables the conservation of rainfall and reduction in soil erosion by retaining a large part of the rain in the basin to be infiltrated gradually, without loss due to surface runoff. The method usually results in high water application and distribution efficiencies if the desired net depth of irrigation can be estimated adequately and if the size of the irrigation streams measured properly.34.2 Design ConsiderationCheck basins are necessarily rectangular or square areas with bunds constructed around the area to control the irrigation water. However for rolling topography the bunds are constructed along the contours and are intersected at definite intervals by cross ridges. The size of the area may vary widely (1 sq. m to 2 ha), based upon the crop, available water supply, soil infiltration characteristics and other local factors. For soils with high infiltration capacity (loam and sandy loam) large sized basins may prove to be uneconomical and inefficient (in terms of irrigation efficiencies). However for clay soils with lower infiltration rates the size can of the check basin can be increased. The height of the bund depends on the amount of water to be retained while its width depends mainly on the bearing strength of the soil.34.2.1 LayoutIn order to maximize the spacing between supply channels it is desirable that the long axis of the basin be perpendicular to the supply channel or pipe line (Fig 1). The main factors to be taken into consideration are: 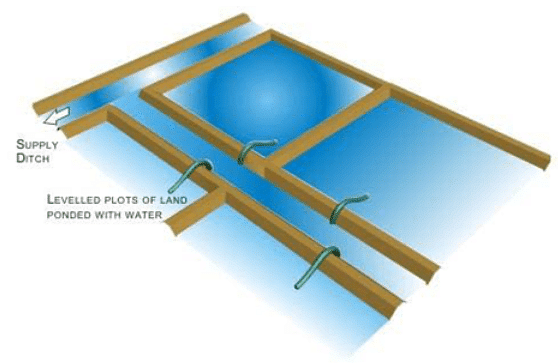 34.2.2 Water Source LocationIt is desirable to choose a water source in the central position of the filed to minimize the construction of channel and pipes also keeping in mind the fact that the water source should be in a position to facilitate the gravity flow to the field channels.34.2.3 TerrainLevel land facilitates the construction of rectangular basin whereas in undulating topography the basin shapes are generally irregular. In case of high slopes terracing is done to obtain level basins.34.2.4 Basin sizesBasin dimensions are generally determined by the inflow stream size and the infiltration characteristics of the soil. Longer basins can be designed for fine textured soils whereas the basin size has to be kept small for sandy soils. The following table (Table 34.1) gives a rough estimate of the basin size for different soil types. However local factors and previous experience play a major role in the determinate of basin size.Table 34.1.Area of basins for different soil types.

34.2.5 Basin WidthThe main limiting factor for basin width is the slope of the land. For higher slopes the width should be small or else huge amount of earthwork would be necessary to level the land. The other factors which play an important role in the determination of basin width are depth of fertile soil, method of basin construction and agricultural practices.If the topsoil is shallow, there is a danger of exposing the infertile subsoil when the terraces are excavated. This can be avoided by reducing the width of basins and thus limiting the depth of excavation. Basins are narrow if they are constructed by the hand but they are wider when machines are used. The basins can be narrow if hand implements are used for intercultural operations however if machines are to be used for intercultural operations the width should be larger. Table 34.2 gives a standard for the basin width in different slopes.Table 34.2.Approximate values for the maximum basin or terrace width(m)

From the above discussions the following conclusions can be drawn:

Basins should be small if the

1. Slope of the land is high2. Soil is highly permeable (sandy)3. Inflow stream is small in size4. Required depth of the irrigation is small5. Field preparation is done by hand or animal traction.

Basins can be large if the

1. Slope of the land is gentle or flat2. Soil has low infiltration rate (clay)3. Inflow stream is large in size4. Required depth of the irrigation application is large5. Field preparation and intercultural operations are mechanized.

34.2.6 Land SmootheningThe levelling of the land by the removal of high and low areas, which cause uneven infiltration, is essential to achieve higher irrigation efficiencies. The levelling of the land also facilitates the construction of supply channels and farm roads.34.2.7 Stream SizeFor level basins the maximum non erosive stream size should be used to achieve better uniformity and minimum deep percolation losses.34.2.8 Irrigation TimeIrrigation time is the infiltration opportunity time. It is calculated from the empirical equations to calculate depth of infiltration noting that the cumulative infiltration should be able to meet the irrigation requirements. The level of water in the field may be maintained by the use of check gates with the height of the shutter adjusted to the required depth of submergence.34.2.9 Inflow TimeThe time for which the water flows into the basin is called the inflow time. This is selected to allow the desired depth of infiltration taking place at the far end of the basin. In general this is the summation of the advance time and the time required to deliver the volume of water needed for adequate irrigation.34.2.10 Ridge/Bunds DimensionsBunds form an important part of any basin. Bunds are small earthen borders which contain the irrigation water within the basin. The height of the bund is determined by the depth of irrigation to be maintained within the basin. The width of the bund should be such that the bund is stable.Temporary bundsare usually 60-120 cm wide at the base and have a height of 15-30 cm above the original ground surface, including a freeboard of 10 cm (which means an irrigation depth of 5-20 cm). Temporary bunds are rebuilt each season and they surround fields on which annual crops are grown. Permanent bundsusually have a base width of 130-160 cm and a height of 60-90 cm when constructed. The settled height will be 40-50 cm. This settling (compaction of the soil) will take in several months. Permanent bunds are mostly used in rice cultivation, where the same crop is planted on the same fields year after year. The bunds are used as paths in the rice fields as well.Water is conveyed to the field by a network of laterals which are fed by a main supply channel situated on the upper side of the field.Generally every two rows of check basins are fed by one lateral (Fig.34.1). The size of the inflow stream should be sufficient enough to cover the basin within a short period of time and provide adequate amount of water to supply the infiltration demands.For irrigating widely spaced plants in the orchards ring basins may be used. In this method, generally for each tree, a separate basin is made which is usually circular in shape as shown in Fig. 34.2. The size of the basin may be increased as the plant matures. The entire area is not flooded in the case of ring basin and hence the irrigation efficiency increases.

34.3 Hydraulics of Check BasinThe irrigation event in the check basin can be considered to have the following four phases.

34.3.1 Initial Spreading of the Entrance Stream To Cover The Full WidthAfter the initiation of the stream into the field the stream spreads along the width of the border till the total width of the border is covered. The stream also advances along the slope during this period.34.3.2 Water Front AdvanceThe water front advance takes place in almost similar manner to that of border irrigation. Land slope, surface roughness, soil type and stream size play the main role in determining the advance characteristics of the water front.

34.3.3 Water StorageThe ponding of water begins once the water reached the downstream end of the check basin. The volume of water stored during a time period is equal to the difference of the volume admitted to the basin and the amount of infiltration taking place.34.3.4 Recession of WaterIn case of check basin the recession of water takes place due to infiltration and the empirical infiltration equations can be used calculate the time required for complete subsidence of water.

1. Water can be applied uniformly.

2. Even small streams can be used for irrigation of crops efficiently.

3. Simple and cheap when equipment is used for constructing bunds.Disadvantages