The symbol • represents a logical AND, but because the use of special symbols can be inconvenient in printed material, the AND symbol is often omitted, as in AB or separated by a full stop as in A.B as used to indicate multiplication in standard algebra. The multiplication symbols x and * can also be seen in some texts, because the logical AND is similar to binary multiplication, (but not the same when numbers having more than one-bit are used).Module 2.2 showed the relationship between a truth table that describes the operation of a circuit, and a Boolean equation that describes the logic of the circuit.

A combinational logic circuit such as that shown in Fig 2.3.1 (a repeat of Fig 2.2.2) is described by a Boolean equation as: 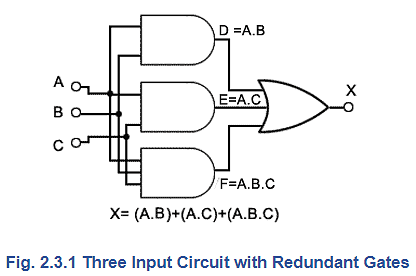 However Module 2.2 also showed that although a Boolean equation may give an accurate description of a logic process described by a truth table, it might require simplification before being interpreted as an actual circuit. The circuit shown in Fig 2.3.1 was simplified in Module 2.2 by closely examining a truth table to find redundant gates. However, with anything but the simplest circuits this can be tedious and it is easy to make mistakes.

This module therefore describes methods for simplifying Boolean equations directly, using Boolean algebra, rather than by the use of truth tables.

The algebraic method used to simplify digital circuits applies a number of Boolean laws to successively simplify complex equations. Selected laws and rules are applied, step by step, to the original equation, so as to eventually arrive at a simplified version that can be implemented with a smaller number of gates and therefore lead to a simpler circuit.

The laws of Boolean algebra are similar in some ways to those of standard algebra, but in some cases Boolean laws are unique. This is because when logic is applied to digital circuits, any variable such as A can only have two values 1 or 0, whereas in standard algebra A can have many values.

In a group of variables connected by operators AND or OR, the order of the variables does not matter.

The order of calculation can be changed without affecting the result (Change which terms are in brackets, or remove brackets). Note: This is only OK so long as all signs (+ or •) are the same.

The same answer is arrived at when multiplying (ANDing) a variable by a group of bracketed variables added (ORed) together, as when each multiplication (AND) is performed separately.

In rule 4a, when the variable A is ANDed with logic 1 (called the Identity Element for the AND operator). The variable ANDed with 1 retains its identity.

Rule 4b, shows that the Identity Element for the OR operator is 0, and any variable (e.g. A) ORed with 0 it retains its identity.

6a and 6b show that ANDing or ORing two identical variables, produces an output equal to a single variable, showing that one of the variables is redundant, a useful rule when simplifying Boolean equations. 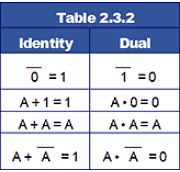 It is possible to derive additional identities by obtaining the Dual of an identity. This involves changing the AND operators to OR and the OR operators to AND. Additionally any 0s are changed to 1s and 1s to 0s as shown in Table 2.3.2.

The duality rule can be used to change a logic expression containing both AND and OR elements to its equivalent dual expression. 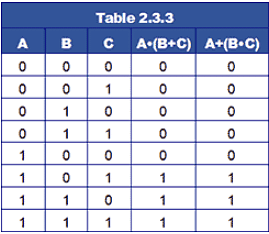 Minimising complex Boolean expressions to their simplest form using Boolean laws and rules is a matter of choosing the most appropriate law or rule to reduce the expression step by step. If the resulting minimisation is correct, the minimised equation and the original equation should give identical output columns when truth tables for the original and minimised circuits are compared.

These Boolean algebraic methods would normally be used on logic circuits with just a few gates and only two or three inputs, as this method of simplification becomes more difficult and cumbersome to use when more gates or inputs are involved.

Which laws are applied to change an equation, and in what order is a matter of practice and intuition. This method involves looking at the original complex equation and selecting a law that will simplify a particular part, so obtaining a simpler equation, and then choosing another law that will simplify the equation further, and so on until the equation can no longer be made simpler.

There is no simple algorithm to specify the order of steps to be taken and several routes may be taken to reach the goal of a simplified and ideally minimised circuit.

Whether the result is also the minimum possible circuit can only be judged by looking for any possible further reduction using the Boolean laws.

In practice, small circuits with just two or three inputs can very often be simplified just by looking at the truth table and picking out any redundant logic combinations, as shown in Table 2.2.2 in Module 2.2 (Combinational Logic), but Boolean simplification is useful for more complex circuits.

Suppose the cash room at a store has access restricted to certain employees, each of whom has a key, which produces a logic 1 at particular inputs to an unlocking circuit. 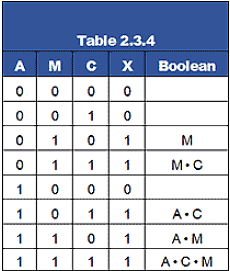 Only the store manager (M) can enter alone. The assistant manager (A) and the cashier (C) also have access, but only when accompanied by each other, or by the store manager. Design a combinational logic circuit that will allow access by producing a logic 1 when the above conditions are met.

The five Boolean expressions can be separated by OR operators to form a complete Boolean equation.

This suggests a circuit like that shown in Fig. 2.3.2, which would require four I.Cs:

However, by choosing appropriate laws and rules from those listed above, the circuit can be considerably simplified. 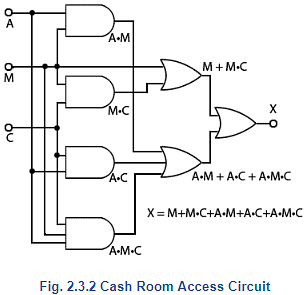 Starting with the equation derived from Table 2.3.4: 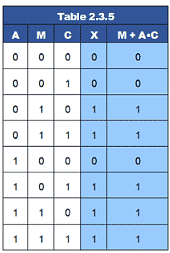 The simplified circuit is shown in Fig 2.3.3, which provides exactly the same function as Fig. 2.3.2. This can be confirmed by comparing the simplified equation X = M + A•C with the original column X in Table 2.3.5.

The simplified circuit in Fig 2.3.3 still requires two I.Cs, (AND and OR) and it now only uses one gate per chip. Unless the spare gates are to be used elsewhere in another part of the circuit, this is still wasteful.

A better option could be to replace the AND and OR functions with universal gates such as NOR or NAND. A ‘NAND only’ version of the simplified circuit is shown in Fig. 2.3.4. This version uses three gates instead of two, but all the gates are the same and can be accommodated within a single 7400 IC. The original circuit has therefore now been reduced from four ICs to one. 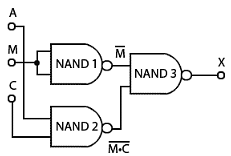 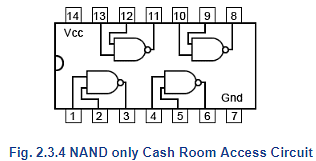 NAND 1 has both its inputs connected together, which converts it to an inverter or NOT gate and therefore produces Mat its output. NAND 2 works as an AND gate with its output inverted and so produces an output of A•C. The Boolean expression for the circuit using NAND gates now becomes:

Augustus De Morgan formulated an extension to George Boole’s Algebraic logic that has become very important in digital logic. Not only is it used in the simplification of Boolean expressions but can also be used to change the function of logic gates, so that NAND gates (or NOR gates) can carry out any of the other standard logic functions of gates. The theorem comprises two laws that describe how inverting the inputs to a gate, changes the gate’s function.

A + B = A • B Inverting the inputs to an OR gate changes its function to NAND.

Considering these two equalities the other way round, A + B = A • B De Morgan’s Theorem is often described as "Break the bar and change the sign." Meaning that by placing, or removing the bar above the AND or OR operator (• or +) the operator is inverted. Therefore the complement of the AND function is OR. 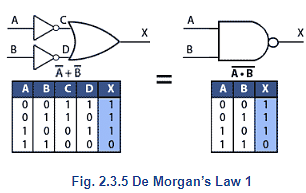 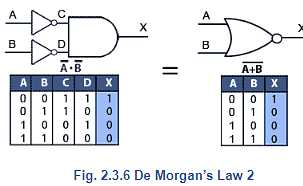 These equalities, generally called De Morgan’s Laws 1 and 2 are illustrated in Fig. 2.3.5 and Fig. 2.3.6 as they apply to AND, NOR, NAND and OR gates. Note however, that when De Morgan’s theorem is applied to the XOR and XNOR gates there is no change in the gate’s function.

The usefulness of De Morgan’s theorem when applied to circuits can be seen by comparing Fig. 2.3.3 and Fig. 2.3.4 where it was instrumental in changing the functions of the AND and OR gates in Fig.2.3.3 to all NAND gates in Fig. 2.3.4, so the circuit can be made using one IC instead of two.

In Fig. 2.3.4 an additional gate NAND 1 appears in the circuit, and has its two inputs connected together to act as a NOT gate (check this by looking at the truth table for a NAND gate in Fig. 2.3.5), when both inputs are the same (row 1 and row 4) the output (X) is an inverted version of the inputs (A•B).

Therefore inputs to NAND 3 are now M and M•C. Therefore both inputs to NAND 3 have been inverted (without actually using any NOT gates) to make NAND 3 act, according to De Morgan’s theorem, as an OR function, so giving the correct output of X = M + A•C.

Boolean algebra gives a more compact way to describe a combinational logic circuit than truth tables alone. It can also be used for simplification of circuits, however this can also be cumbersome and error prone. When circuits with more than two or three inputs are involved a better method of circuit reduction that works well with circuits having up to four or six inputs is the Karnaugh Map