When a real fluid flows over a solid body, the velocity of the fluid at the boundary will be zero. If the boundary is stationary. As we move away from the boundary in perpendicular direction velocity increases to the free stream velocity. It means velocity gradient (du/dy) will exist. 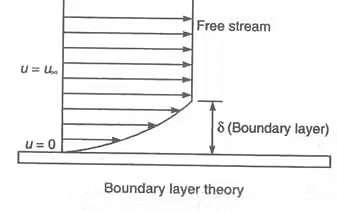 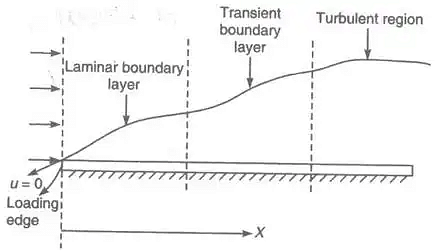 Here, x is the distance from the leading edge in the horizontal direction.

It is the distance from the boundary to the point where the velocity of the fluid is approximately equal to 99% of free stream velocity. It is represented by δ. 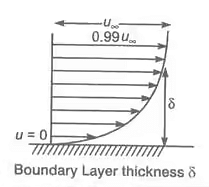 It is observed that inside the boundary layer velocity of the fluid is less than the free stream velocity hence, discharge is less in this region. To compensate for the reduction in discharge the boundary is displaced outward in a perpendicular direction by some distance. This distance is called displacement thickness (δ*). 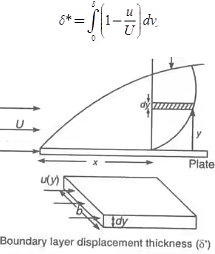 As due to boundary layer reduction in velocity occurs so, momentum also decreases. Momentum thickness is defined as the distance measured normal to the boundary of the solid body by which the boundary should be displaced to compensate for the reduction in the momentum of flowing fluid.

Boundary Conditions for the Velocity Profile

A flow in which fluid flows in layer and no intermixing with each other is known as laminar flow. For circular pipe, the flow will be laminar.

In this flow, an adjacent layer of fluid cross each other (particles of fluid move randomly instead of moving in a streamlined path), for flow inside the pipe. If Re > 4000, the flow is considered turbulent, for flat plate, Re > 5 × 105.Von Karman Momentum Integral Equation

Where, U = Free stream velocity; ρ = Density of fluid.Local Coefficient of Drag (CD*)

Where, A = Area of surface,U = Free stream velocity, ρ = Mass density of the fluid. 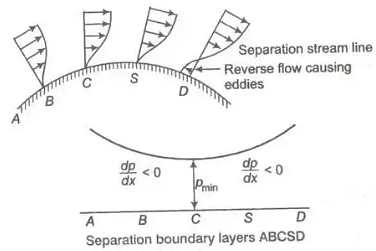 the flow is on the average of separation (∂ρ / ∂x = o)

Suction of slow-moving fluid by a suction slot.