Ques 1: State Ohm's law. Ans: According to Ohm's law, the electric current flowing through a metallic wire is directly proportional to the potential difference V, across its ends provided its temperature remains the same. In other words, V∝∝I Or, V = RIWhere, R is a constant of proportionality called resistance of the resistor, it tends to resist the flow of charge through a conducting wire. Its SI unit is Ohm (Ω).Ques 2: Name any two nutrients that the spent slurry has in the biogas plant.Ans: Two nutrients that the spent slurry has in the biogas plants are nitrogen and phosphorous.  Ques 3: Draw a labelled ray diagram to show the path of the reflected ray corresponding to an incident ray of light parallel to the principal axis of a convex mirror. Mark the angle of incidence and angle of reflection on it.Ans: 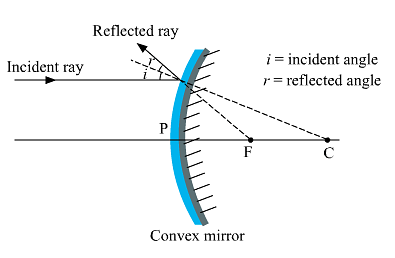 Ques 5: Define genetics. Why is decrease in the number of surviving tigers cause of concern from the point of view of genetics? Explain briefly.
Ans: Genetics is a branch of biology which deals with the study of genes, genetic variation and heredity in organisms. From the point of genetics, a small population of an organism means, limited scope of variation which in turn would result in reduced traits and diversity. A decrease in the number of surviving tigers is a cause of concern because it can lead to the loss of genetic variability which can negatively impact the fitness of tiger populations. If the entire population of tigers get extinct due to any reason, it would result in the loss of their genes. This would have a direct effect on the ecological balance and effect the ecosystem adversely.

Ques 6: 2 g of ferrous sulphate crystals are heated in a dry boiling tube.
(a) List any two observations.
(b) Name the type of chemical reaction taking place.
(c) Write balanced chemical equation for the reaction and name the products formed.
OR
You might have noted that when copper powder is heated in a china dish, the reddish brown surface of copper powder becomes coated with a black substance.
(a) Why has this black substance formed ?
(b) What is this black substance ?
(c) Write the chemical equation of the reaction that takes place.
(d) How can the black coating on the surface be turned reddish brown?
Ans: (a) On heating 2 g ferrous sulphate following observations are obtained:
i) On heating, the colour changes from light green to white.
ii) On further heating, the white substance changes to dark brown solid.
iii) The gas emitted has the characteristic odour of burning sulphur.
b) Decomposition reaction is taking place on heating ferrous sulphate.

OR
a) The black colour is due to the oxidation of Cu.
b) When the copper powder is heated, it combines with oxygen in the air to form copper oxide which is black in colour.
c) 2 Cu + O2 →2CuO
d) We can use the wire strippers to remove this black coating of copper oxide.

Ques 7: What is a food chain? Why is the flow of energy in an ecosystem unidirectional? Explain briefly.
OR
(a) Why should National Parks be allowed to remain in their pristine form?
(b) Why is reuse of materials better than recycling?
Ans: A food chain is a series of organisms where one is eaten by the next member in the series. Organisms are grouped according to their feeding habit into trophic levels. Grass (a producer) gets eaten by insects (primary consumers), which in turn get eaten by rats (secondary consumer) and finally is itself eaten by snakes (tertiary consumer). In this food chain, the organisms placed in the higher level get energy by consuming the ones at the lower level. Consumers, like insects, eat grass and thus the energy flows from grass to insects; the opposite is not possible. Hence, the flow of energy in an ecosystem in unidirectional
OR
(a) A National park is an area designated as protected by the government and is aimed at protecting the natural environment therein. It might comprise well-developed ecosystems where interactions between the components are well established. Any perturbations in such ecosystems will cause a cascade of effects given to the relationships between the biotic and abiotic components in the ecosystems. Hence, we should abstain from producing any changes in such parks.
(b) Recycling involves processes that use waste material to produce a commodity. Several things like some plastics, papers are recyclable. However, all such processes require some inputs as well as processing. Reusing increases the time for which the commodity is in usage and thus prevents the processing and inputs required for recycling. Thus, reusing can decrease the pressure on digging up for more resources for manufacturing or recycling and hence is a better approach.

Carbon dioxide produced during the reaction causes bread or cake to rise making them soft and spongy.
The function of the tartarate salt → When the baking powder comes in contact with water the tartaric acid gets active and reacts with the sodium bicarbonate and carbon dioxide gas is evolved in this reaction which is the reason of puffiness of the cake and bread.
The function of corn starch in the baking soda is to act a filler, it absorbs any extra moisture and prevents the baking soda from acting too quickly.

Ques 10: (a) Write two water conducting tissues present in plants. How does water enter continuously into the root xylem?
(b) Explain why plants have low energy needs as compared to animals
Ans: (a) Xylem vessels and tracheids are the water-conducting tissues in vascular plants. Roots of most of the vascular plants first actively absorb minerals and salts from the soil, leading to endosmosis of water into the root tissue. This creates a positive and upward hydrostatic pressure into the xylem tissue of the plant. Thereafter transpirational pull creates a suction force to pull up the water column upwards to the higher regions of the plant body. Forces of cohesion between the water molecules and adhesion between the water molecules and xylem vessel walls lead to the creation of unbroken upward column of water being pulled up.
(b) Plants are primarily stationary and do not show or use muscular energy for movement and locomotion. Thus a lot of energy is saved as they cannot use muscular energy and thus have comparatively very less energy requirement compared to the animals.

Ques 12: Mention the environmental consequences of the increasing demand for energy. List four steps you would suggest to reduce the consumption of energy
Ans: The increasing demand for energy is met by fossil fuels like coal and petroleum. There are several environmental consequences of the increased usage of these fossil fuels as below -
1. Fossil fuels are non-renewable sources of energy and can be exhausted faster upon being increasingly used.
2. The burning of fossil fuels produces smoke and that causes severe environmental pollution.
3. The gases produced upon combustion of fossil fuels leads to the greenhouse effect, which is responsible for the change in environmental weather all across the world.
Steps that can be taken to reduce energy consumption are on the whole is all about using energy very judiciously.
1. Use of electricity and electrical appliances like air conditioners must be reduced and should be used only when necessary.
2. Public transport means should be chosen by one and all for mass transit.
3. Prevent unnecessary waste of water.
4. Solar heaters should be used in place of electrical heaters wherever possible.

Ques 14: What would you observe on adding zinc granules to freshly prepared ferrous sulphate solution? Give reason for your answer.
Ans: Ferrous sulphate is green in colour. When zinc granules are added to ferrous sulphate, its green colour will fade away. This happens because zinc is more reactive than iron, it will displace iron and form zinc sulphate.
The chemical equation will be
Zn(s) + FeSO4(aq) →ZnSO4(aq) + Fe(s)

Ques 15: How is the presence of an acid tested with a strip of red litmus paper? OR A student is performing an experiment to study the properties of acetic acid. Answer the following questions:
(i) Name the substance he must add to acetic acid to produce carbon dioxide.
(ii) Give the relevant chemical equation for the reaction.
(iii) How would he test CO2 gas in the laboratory?
Ans: Red litmus changes to blue in case of base while remains the same in case of acid. So acids don't change the red litmus.
OR
i). The reaction of sodium carbonate with acetic acid can be used to produce carbon dioxide gas.
ii). CH3COOH + Na2CO3 → CO2 + CH3COO−Na+ + H2O
iii). Limewater test can be used to test the presence of carbon dioxide gas. Passing the gas from limewater, it turns milky, due to the formation of insoluble suspension calcium carbonate.

If more carbon dioxide is passed through the solution then the milkiness gets disappeared due to the formation of calcium bicarbonate which is soluble in water.

Ques 16: A teacher gives a convex lens and a concave mirror of focal length of 20 cm each to his student and asks him to find their focal lengths by obtaining the image of a distant object. The student uses a distant tree as the object and obtains its sharp image, one by one, on a screen. The distances d1 and d2 between the lens/mirror and the screen in the two cases and the nature of their respective sharp images are likely to be
(a) (20 cm, 40 cm) and (erect and erect)
(b) (20 cm, 40 cm) and (inverted and inverted)
(c) (20 cm, 20 cm) and (inverted and inverted)
(d) (20 cm, 40 cm) and (erect and inverted)
Give reason for your answer.
Ans: Convex lens and concave mirror both are converging in nature. The parallel rays incident on the lens or the mirror from a distant object converge on the focal plane. Thus, the distance d1 = 20 cm and d2 = 20 cm. As the image formed is real for lens and mirror both, so the image will be inverted. Hence, the correct answer is option C.

Ques 17: In the experiment "To prepare a temporary mount of a leaf peel to show stomata", glycerine and safranin are used. When and why are these two liquids used? Explain.
Ans: Glycerine is used while preparing temporary mount of leaf peel - It is a good dehydrating agent which means it avoids the drying of the specimen.
It tends to reflect light due to its refractive nature, as a result of which image appears clearer under the microscope.
Safranin is used to prepare temporary mount of onion peel as it binds to the component of the cells and impart them a colour which makes it easier to visualise them under the microscope.