The document Carbohydrate -Bio-Molecules Chemistry Notes | EduRev is a part of the Chemistry Course Organic Chemistry.
All you need of Chemistry at this link: Chemistry

We are aware that our body, plants and other animals are made up of many chemical substances. There are certain complex organic molecules which form the basis of life. These build up living organisms and are also required for their growth and maintenance. Such molecules are called biomolecules. The main classes of bio-molecules are

Carbohydrates form a very large group of naturally occurring organic compounds which play a vital role in daily life. They are produced in plants by the process of photosynthesis. After eating plant foods, humans convert the carbohydrates into glucose.

A. Depending upon their behaviour on hydrolysis-

(1) Monosaccharides: polyhydroxy aldehyde or ketone which cannot be hydrolysed further to a smaller molecule containing these functional groups, is known as a monosaccharide. About 20 monosaccharides occur in nature and glucose is the most common amongst them. 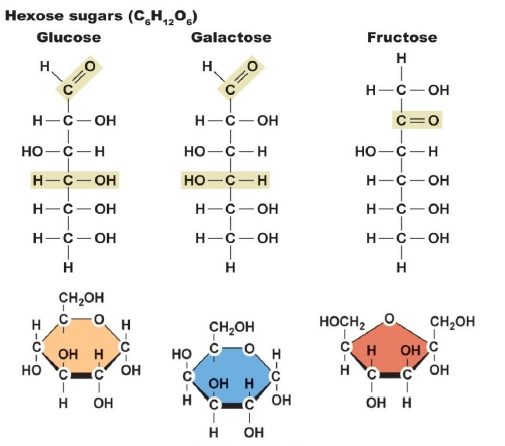 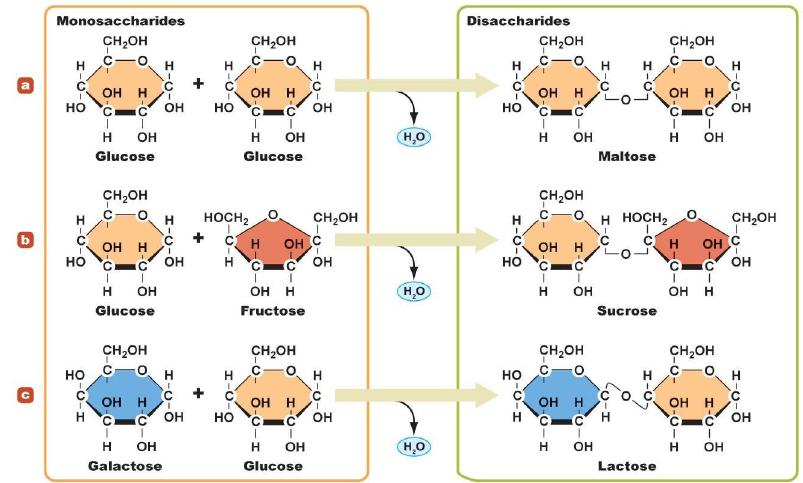 Amylose: It is a component of starch.

Amylopectin: It is another polysaccharide component of starch that has a branched structure. 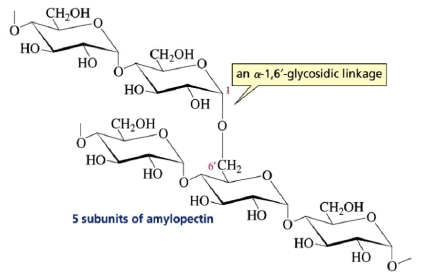 The Comparison of Starch and Glycogen Molecules 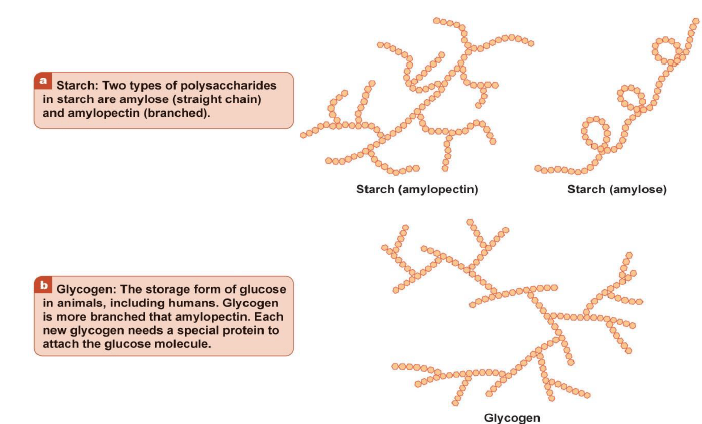 (4). Oligosaccharides: Similar in length to simple carbohydrates and in makeup to polysaccharides. Humans lack the enzymes necessary to digest them. Intestinal microflora digest and ferment them and cause bloating, discomfort, and flatulence. Food sources are Legumes, beans, cabbage, brussels sprouts, broccoli.

The Structure of an Oligosaccharide 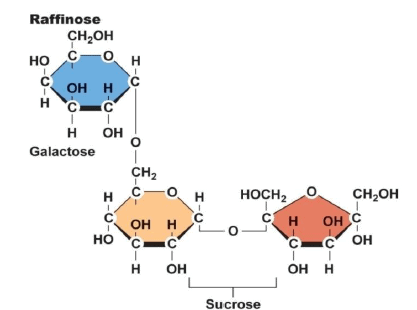 B. Depending upon functional group

1. Aldoses: They are aldehyde containing carbohydrates. At C1, carbonyl is an aldehyde.

2. Ketoses: They are ketone containing carbohydrates. At any other carbon, carbonyl present would be ketonic group.

C. Depending upon no. of carbon atoms 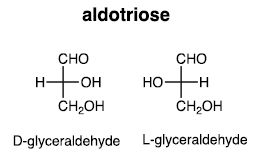 Ketoses are less common than aldoses. 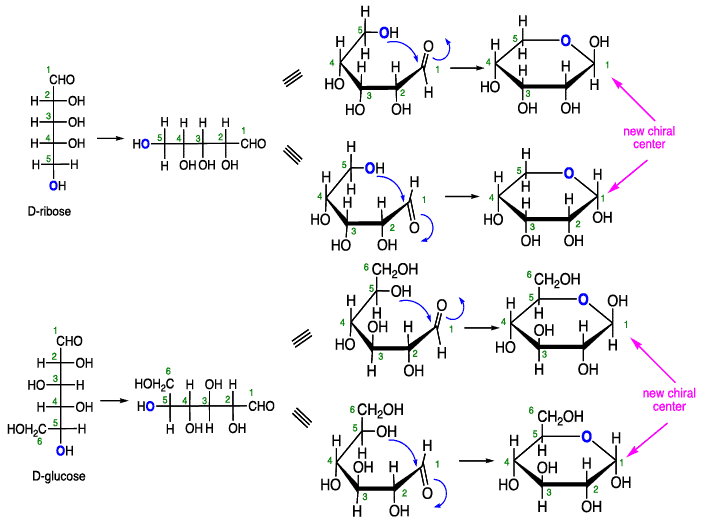 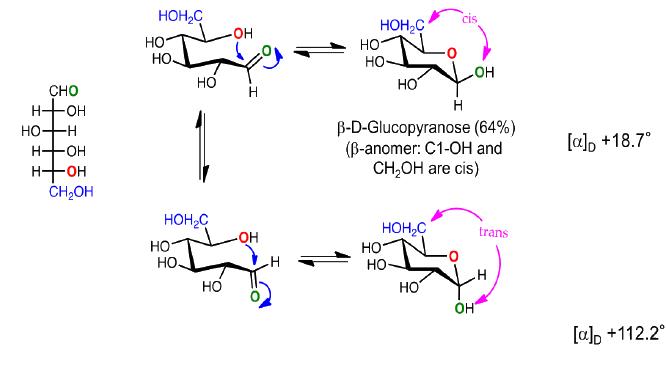 Reaction of Ketoses with Phenylhydrazine.

Carbohydrates that do not contain hydroxy group.

C1 of aldoses can be selectively oxidized to the carboxylic acid (aldonic acids) with Br2 or Ag(I) (Tollen’s test). 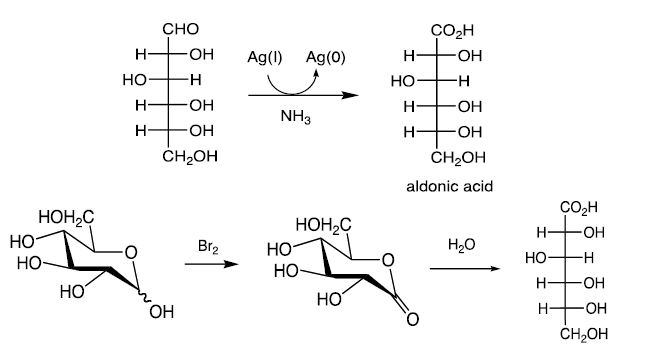 Reducing sugars: Carbohydrates that can be oxidized to aldonic acids. For example, oxidation of aldoses to aldaric acids with HNO3. 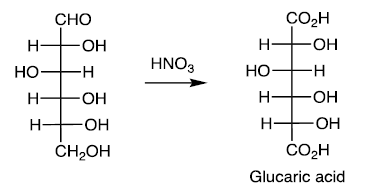 The carbon chain of an aldose can be increased by one carbon by Kiliani–Fischer synthesis method. 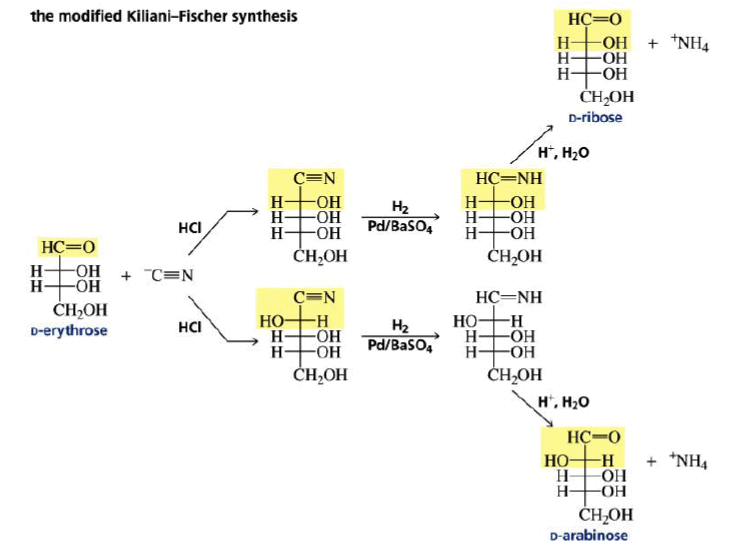 The Ruff degradation shortens an aldose chain by one carbon.

Preparation of the Calcium D-Gluconate for the Ruff Degradation

Alkylation of the OH Groups 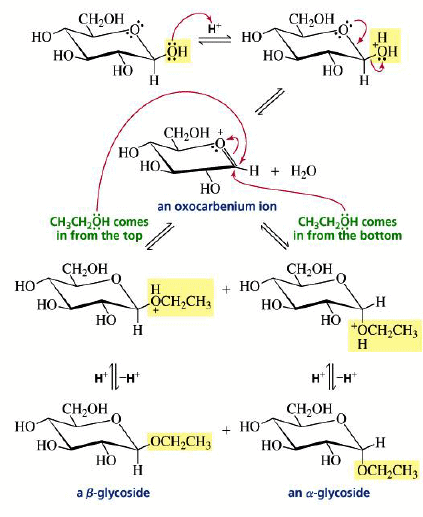 The anomeric effect refers to the tendency of a group X at C(1) of a pyranose ring to assume the axial rather than the equatorial orientation. This phenomenon is important in carbohydrate chemistry since it influences the composition of isomeric mixtures and hence their reactivities. It has been suggested that the effect is caused mainly by a stabilizing interaction between the axial lone pair of electrons on the ring oxygen atom and the anti-periplanar, antibonding orbital of the C-X bond. This leads to a shortening of the bond between the ring oxygen and the anomeric carbon and a lengthening of the C-X bond. Alternatively, electrostatic repulsive forces between the dipoles due to the ring oxygen lone pairs and the exocyclic oxygen or halogen may account in part for the observed axial preferences. The anomeric effect is solvent and substituent dependent and decreases in the following order: C1> OAc > OMe > OH, as exemplified by the equilibrium concentrations of the alpha and beta anomers of substituted D-glucose in various protic solvents at 250C.

The formation of a glycoside favors the α-glucoside product: the anomeric effect.