The document Cell, Types of Cell and Organisms Class 9 Notes | EduRev is a part of the Class 9 Course Science Class 9.
All you need of Class 9 at this link: Class 9

The cell and its structures are studied under a branch of biology called cytology.

1. Robert Hooke (1665): An English man and first curator of Royal Society of London.

2. Antony Van Leeuwenhoek (1674): was the first to observe living cells like Bacteria (from tartar of teeth), Erythrocytes (fish), Sperms, and Protozoans (Vorticella).

3. N. Grew (1682): Proposed cell concept which states that a cell is the unit of structure of organisms.

5. Knoll & Ruska (1932): Designed the electron microscope which was employed to study the ultrastructure of a cell and various cell organelles. 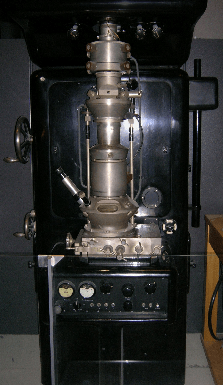 Microscope designed by Knoll and Ruska

Basic Criteria for Defining the Cell

(i) Presence of genetic material.

The cell is called Structural & Functional Unit of Life because:(i) All living organisms are composed of one or more cells.(ii) All the cells have a similar basic structure.(iii) Similar cell organelles of different cells perform similar functions.

Try yourself:Cell theory was given by
Explanation

Cell theory was given by Matthias Schleiden who was a German botanist and Theodor Schwann, a German zoologist. Schleiden said that every plant is made up of a large number of cells, and each cell performs various life processes. Theodor Schwann announced that all animals and plants are composed of cells, which are the units of structure and function.

The shape of a cell mainly depends upon the specific function it performs.

Try yourself:1 μm is
Explanation

The micrometre, also commonly known as a micron, is an SI derived unit of length equalling 1 × 10−6 metre.

So, correct option is A

Prokaryotes are organisms without a distinct cell nucleus or any other membrane-bound organelles. Most are unicellular, but some prokaryotes are multicellular. The ribosome is the only organelle found in prokaryotic cell and it functions in the translation of messenger RNA into proteins.

So, the correct option is B.

Types of Organisms on Basis of Number of Cells

On the basis of the number of cells the organisms can be categorised as: 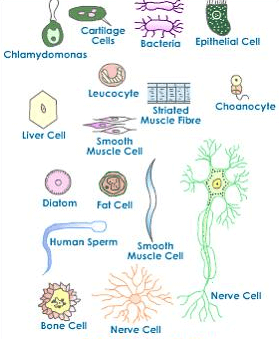