Definition of Fluid:- A fluid is a substance which flows continuously under the action of shear force (however small the force may be), as long as shear force is there the fluid moves or deforms.E.g: - Liquids, gases, vapour etc.For a static fluid shear force = 0

Specific Weight or Weight Density:
-Specific weight or weight density of  a fluid  is defined  as the  ratio of  weight of a fluid to its volume.
-Thus, weight per unit volume of a fluid is called weight density.
-It is denoted by the symbol ‘w’.
-Mathematically, -Specific gravity of mercury is 13.6.

Viscosity:
-Viscosity is defined as the property of fluid which offers resistance to the movement of one layer of fluid over another adjacent layer of fluid.
-When two layers of a fluid distance ‘dy’ apart, move one over the another at different velocities, say u and u + du as shown in fig., the viscosity together with relative velocity causes a shear stress acting between the fluid layers. -The  top  layer  causes  a  shear  stress  on  the  adjacent  lower  layer  while  the  lower layer causes shear stress on the adjacent top layer.
-This shear stress is proportional to the rate of change of velocity with respect to
y.
It is denoted by symbol Τ (Tau). 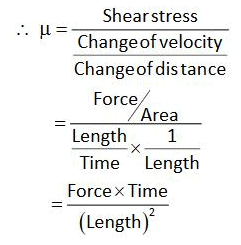 Newton’s Law of Viscosity::
-Its states that the shear stress (Τ) on a fluid element layer is directly proportional to the rate of shear strain.
-The constant of proportionality is called the co-efficient of viscosity.
-Mathematically, 1. Ideal Fluid (Perfect Fluid)
-A fluid, which is incompressible and is having no viscosity, is known as ideal fluid.
-Ideal fluid is only an imaginary fluid because all the fluids, which exit, have some viscosity.
-Used in mathematical analysis and flow problems.
-Ideal fluid has no surface tension

2. Real Fluid
-Possess the properties such as viscosity, surface tension and compressibility.
-Offers resistance against flow.
-All the fluids in practice are real fluids.

3.Newtonian fluid
-A real fluid,in which the shear stress is directly proportional to the rate of shear strain(or velocity gradient), is known as the Newtonian fluid.
-Example:Water, Air, Thin motor oil

4. Non-Newtonian Fluid:
-A  real  fluid,  in  which  the  shear  stress  is  not  proportional  to  the  rate  of  shear strain(or velocity gradient), is known as the non-Newtonian fluid.
-Example : Tooth Paste

Surface Tension (s or σ):
-Surface tensions is due to cohesion only.
-Surface tension decrease with increase in temperature and it also act when fluid is at rest
-It is a surface phenomenon
-At critical point liquid and vapour are at same state thus surface tension is zeroswater = 0.0736 N/m at 20ºCsmercury = 4.51 N/m

Capillary Action:
-Capillarity is defined as a phenomenon of rise or fall of a liquid surface in a small tube relative to the adjacent general level of liquid when tube is held vertically in the liquid.
-The  rise  of  the  liquid  surface is known as capillarity rise while the fall of liquid surface is known as capillarity depression or fall.
-It is expressed in terms of cm or mm of liquid.
-Its value depends upon the specific weight of the liquid, diameter of the tube and surface tension of the liquid.
Expression for Capillarity Rise:

h = rise in capillaryσ = surface tension of water & glassd = diameter of tubeθ = angle of contact between the liquid and the material-The value of θ between water and clean glass tube is approximately equal to zero and hence cosθ is equal to unity.
Compressibility :
It refers to change in volume/density due to change in pressure.