The various sources of water can be classified into two categories: 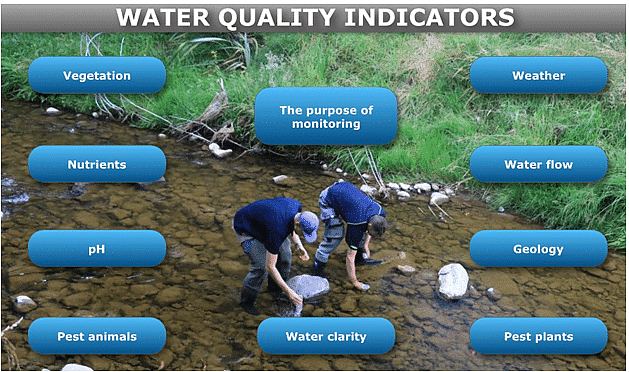 (i) Turbidity: It is due to suspended particles. It depends upon the fineness and concentration of particles. It can be measured as the interference to the passage of light through the given water.1. Turbidity rod: It is to be dipped till the needle just disappears. That reading of rod gives the turbidity in mg/l. The calibration is based on suspension of silica.

(a) Jackson turbidity meter: The depth of column of water required to cause the image of a candle flame at the bottom to diffuse into a uniform glow.Units: JTU(b) Baylis turbidity meter: The turbidity is measured by a technique to measure level of light scattered by the particles at right angles to the incident light beam. The scattered light is proportional to the particle concentration in the sample.Units: NTULake water: Turbidity < 25 unitsDrinking water: Turbidity 10 to 25 units(ii) Color: Dissolved organic matter from decaying vegetation or some inorganic materials may impart color to the water. It can be measured by comparing the color of water samples with other standard glass tubes (Nessler tubes) containing solutions of different standard color intensities. The standard unit of color is that which is produced by 1mg of platinum cobalt dissolved in 1 litre of distilled water.Instrument: Tintometer.The IS value for treated water is 5 to 25 cobalt units. (iii) Taste and odour:  The extent of taste or odour present in a particular sample of water is measured by a term called odour intensity, which is related with the threshold odour or threshold odour number.Water to be tested is therefore gradually diluted with odour free water, and the mixture at which the detection of odour by human observation is just lost, is determined. The number of times the sample is diluted represents the threshold odour number.

For public supplies, the water should generally free from odour, i.e. the threshold number should be 1 and should never exceed 3.

(iv) Temperature: The increase in temperature decreases palatability, because at elevated temperatures, CO2 and other volatile gases are expelled. The ideal temperature of water for drinking purposes is 5 to 12ºC. Above 25ºC, water is not recommended for drinking.

(i) Solids: The sum of suspended solids and dissolved solids is called total solids. Suspended solids can be found by filtration and total solids can be found by evaporation.Allowable limit for total solids: 500ppm.(ii) pH: pH value denotes the acidic or alkaline condition of water. It is expressed on a scale ranging from 0 to 14, which is common logarithm of the reciprocal of the H+ ion concentration. The recommended pH range for drinking water is 6.5 to 8.5.(iii) Hardness: Hardness in water is that characteristic which prevents the formation of sufficient leather or foam when such hard waters are mixed with soap.The principal hardness causing cations are calcium, magnesium, strontium, ferrous and manganese ions. The major anions associated with these cations are sulphates, carbonates, bicarbonates, chlorides and nitrates.

There are two types of hardness:1. Temporary hardness: Caused due to presence of carbonates and bicarbonates of calcium and magnesium this can be removed by boiling or by adding lime solution in water. Temporary hardness is also called carbonate hardness.2. Permanent hardness: Caused due to the presence of sulphates, chlorites and nitrates of calcium and magnesium. They cannot be removed by simple boiling and require special treatment of water softening it is also called as Non-carbonate hardness.Total hardness= temporary hardness+ permanent hardnessIf total hardness < Alkalinity; carbonate hardness = total hardnessPermanent hardness = 0If total hardness > Alkalinity; carbonate hardness = AlkalinityPermanent hardness = Total- Alkalinity(iv) Alkalinity: The alkalinity of water is a measure of its capacity to neutralise acids. It is expressed as mg/L in terms of calcium carbonate. The various forms of alkalinity are (a) hydroxide alkalinity, (b) carbonate alkalinity, (c) hydroxide plus carbonate alkalinity, (d) carbonate plus bicarbonate alkalinity, and (e) bicarbonate alkalinity, which is useful mainly in water softening and boiler feed water processes. Alkalinity is an important parameter in evaluating the optimum coagulant dosage.(v) Chlorides: Chloride ion may be present in combination with one or more of the cations of calcium, magnesium, iron and sodium. Chlorides of these minerals are present in water because of their high solubility in water. The chloride content of treated water to be supplied to the public should not exceed a value of about 250 ppm. The chloride content of water can be measured by titrating the water with a standard silver nitrate solution using potassium chromate as indicator.(vi) Nitrogen: The presence of nitrogen in water may occur in one or more of the following reasons:

Water polluted by sewage contains one or more species of disease-producing pathogenic bacteria. Pathogenic organisms cause water-borne diseases and many non-pathogenic bacteria such as E.coli, a member of Coliform group, also live in the intestinal track of human beings. Coliform itself is not a harmful group but it has more resistance to adverse conditions than any other group. So if it is ensured to minimize the number of Coliforms, the harmful species will be very less. So, the Coliform group serves as an indicator of contamination of water with sewage and the presence of pathogens.The methods to estimate the bacterial quality of water are:(a) Standard plate count test: In this test, the bacteria are made to grow as colonies, by inoculating a known volume of sample into a solidifiable nutrient medium, which is poured in a Petri dish. After incubating (35º C) for a specified period (24 hours), the colonies of bacteria (as spots) are counted. The bacterial density is expressed as number of colonies per 100 ml of sample.(b) Most probable number: MPN is a number which represents the bacterial density which is most likely to be present. E.coli is used as indicator of pollution. E.coli ferment lactose with gas formation with 48 hours of incubation at 35ºC. Based on this E.coli density in a sample is estimated by multiple tube fermentation procedure, which consists of the identification of E.coli in different dilution combinations. MPN value is calculated as follows.Five 10ml (Five dilution combination) tubes of sample is tested for E.coli out of five only one gives positive test for E.coli and all others negative. From the tables MPN value for one positive and four negative results is read which is 2.2 in present case. The MPN value is expressed as 2.2 per 100ml.(c) Membrane filter technique: In this test a known volume of water sample is filtered through a membrane with opening less than 0.5 microns. The bacteria present in the sample will be retained upon the filter paper. The filter paper is put in contact of a suitable nutrient medium and kept in an incubator for 24 hours at 35°C. The bacteria will grow upon the nutrient medium and visible colonies are counted. Each colony represents one bacterium of the original sample. The bacterial count is expressed as a number of colonies per 100 ml of sample.