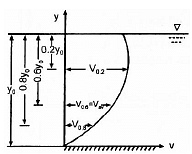 (a) Depth of Flow (y) : Vertical distance between the lowest point of the channel section (bed of the channel) to the free liquid surface.

(c) Wetted Area (A) : Cross sectional area of the channel normal to the direction of flow.

(d) Channel slope (S) : Inclination of channel bed is called channel slope and is given by,

If the datum coincides with the channel bed at the section, the resulting expression is known as SPECIFIC ENERGY and is denoted by E. Thus. 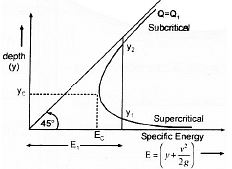 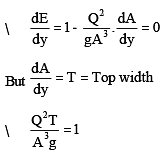 Equation (i) & (ii) are basic equations for critical flow conditions in a channel.

The manning’s formula is most widely used in uniform flow.Relationship between Manning’s ‘n’ ‘c’ & ‘f’ :

(By comparing chezy and Manning’s formula)

(a) Rectangular Section A = By = Constant

(i) R = (y/2)(ii) The trapezoidal channel should be part of regular hexagon.(iii) The side slopes should be 60° with the horizontal.(iv) Half top width is equal to one of the sloping sides

Basic Assumptions of Gradually Varied Flow Analysis(i) The pressure distribution at any section is assumed to be hydrostatic.

(ii) The resistance to flow at any depth is given by the corresponding uniform flow equation, such as Manning’s formula with the condition that the slope term to be used in the equation is energy slope and not the bed slope.Dynamic Equation of GVF

Classification of Water Surface Profiles  It is clear that the gradient of free surface dy/dx may be positive or negative depending on signs of numerator and denominator, which in turn depends on y, yc and yn. Whether the yn is below or above yc will depend on the classification of be slope. Surface profiles are classified by a letter and a number. The letter refers to the bed slope, whcih may be one of the fllowing : M Mild slope yn > yc C Critical slope yn = yc S Steep slope yn < yc H Horizontal So = O A Adverse So < O

RAPIDLY VARIED FLOW (RVF)Hydraulic Jump  Hydraulic Jump Is an example of steady RVF.  A hydraulic jump occurs when a super critical stream meets a subcritical stream of sufficient depth. The super critical stream jumps up to meet its alternate depth. While doing so it generates considerable disturbances in the form of large scale eddies and a reverse flow roller with the result that the jump falls short of its alternate depth.  A schematic sketch of jump is as shown below :

 Section (1), the point of commencement of jump is called TOE of Jump.  The distance between (1) and (2) is called LENGTH OF JUMP (L J).  The two depth y1 and y2 at the ends of the jump are called SEQUENT DEPTHS.  The specific force diagram resembles specific energy diagram. 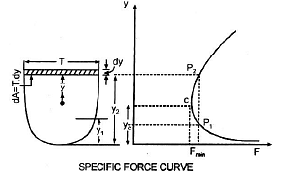 From specific force curve we can find the sequent depths y1 and y2 for a given discharge in a given horizontal channel.Condition for Critical Flow :

Hydraulic Jump in a rectangular channel :

Froude number at (i)