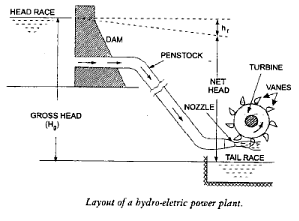 Classification of Turbines on the basis of energy at inlet

A jet ratio of 12 is normally adopted

=18 to 25This formula is called Tygun formula.

Purpose of draft tube(i) Permits the negative suction head to establish at the runner exit(ii) It acts as a recuperator of pressure energy.The angle of straight divergent type draft tube should not be more than 8° otherwise eddies will be formed& efficiency will be reduced.

The concept of unit quantities is required to(i) predict the behaviour of turbines working under different conditions.(ii) make comparison between the same type but different size of turbines.(iii) co-relation and use of experimental data.

(i) For Francis Turbine,

(iii) For Kaplan Turbine,sc is 10% higher than sc for properller turbine.