It is four layer, three junction device, having three terminals namely anode (A), cathode (K)  and gate (G) as shown in figure below: 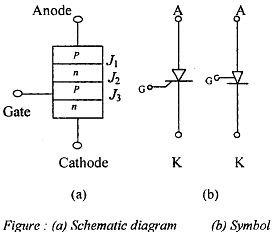 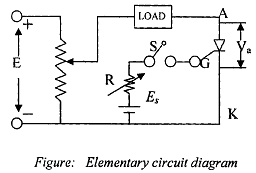 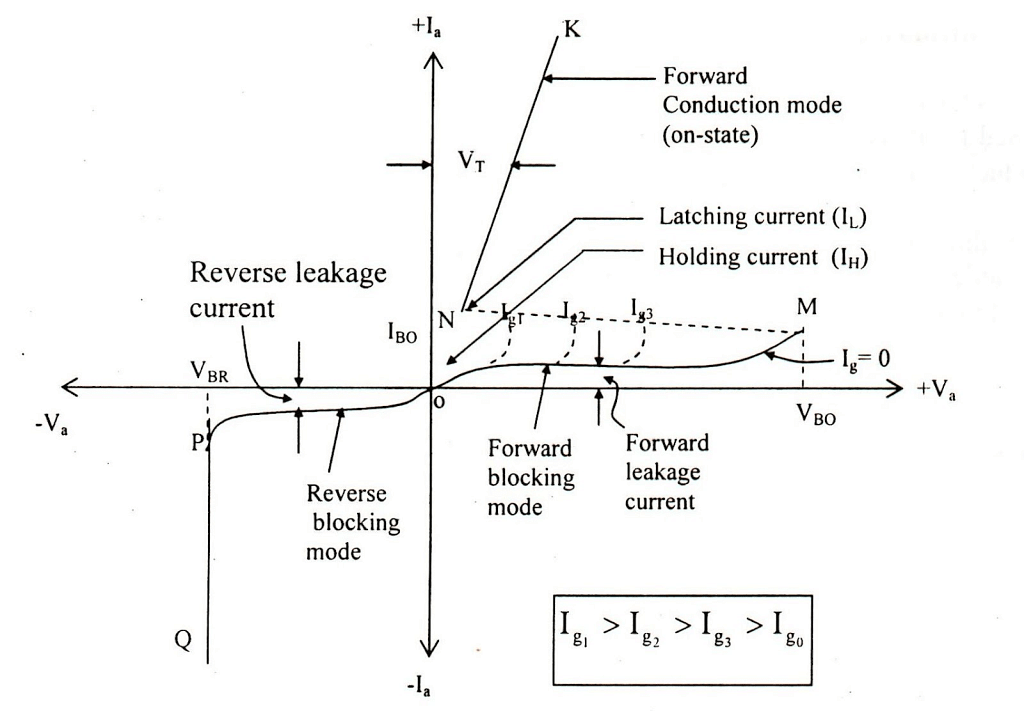 In elementary circuit diagram, if A is made negative w.r.t. K i.e. Va = – ive junction J1 and J3 are reverse biased while J2 is forward bias. 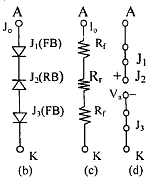 Two Transistor Analogy of A Thyristor

The working of thyristors may be analysed as back-to-back connected two transistors (one NPN and one PNP). Figure below shows such as representation. Q1 is PNP and Q2 is NPN transistor. Collector of Q1 is connected to base of Q2 and vice-versa.

When once Ia has built up in circuit, opening of the switch in the gate circuit has no influence. The only way to turn off the thyristor is to disconnect it from the supply or to decrease the anode current below a certain value. 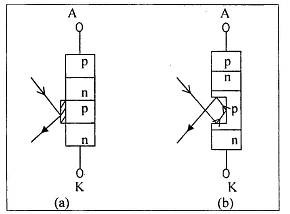 5. Gate protection Stabilized gate voltage is obtained using zener diode, while R1 and C1 are used as a filter. 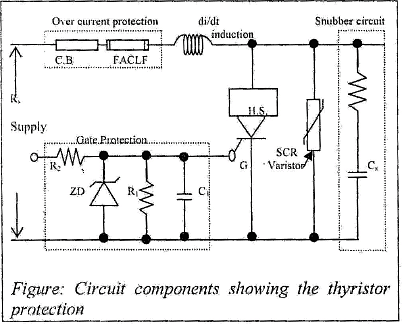 Thyristor Triggering Circuits Out of the various method of turning on a thyristor described earlier, gate signal method is widely used.Some triggering or firing circuits are described as follows:

1. Direct Current Firing A continuous gate signal is not generally requirec except in applications where the thyristor may turn, off before the time required. Figure shows a typicai d.c. firing signal circuit. When the anode is positive and the thyristor is on, the gate current is reduced as the voltage to produce the gate current no^ corresponds to the forward voltage drop of the thyristor, which is about 1 V. The diode D is connected between the gate and the cathode are prevents large reverse voltage across the gate and the cathode terminals when the current is interrupted. 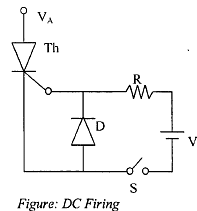 This is knows as phase control of firing and the instant of firing can be manipulated to occur at any particular-phase between 0 to n of the half cycle of an AC signal. 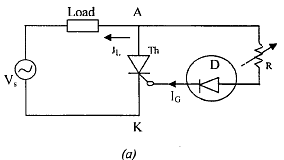 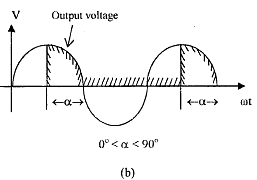 Phase control is used to alter AC power to be supplied to load. The power is modulated by varying the part of the voltage cycle during which the current is allowed to conduct. To achieve control, the pulse to turn of the thyristor at the correct part of the cycle is synchronized with the AC supply and its phase with respect to the supply voltage is controlled. The anode to cathode phase control can have any desired angle for conduction e.g. 90º, 120º, 150º etc. Figure (b) shows a simple circuit to obtain 90º phase control.A variable resistance R and a diode D is connected between anode and the gate across the thyristor The alternating current supply is connected to thyristor and load. By varying the resistance, the delay time is adjusted. Increased resistance delays the time or the phase in the cycle so that the voltage is positive enough to drive sufficient gate current to turn the thyristor on.

3. Pulse Firing There are advantages in having pulse signals rather than continued DC. signals. Pulse signals may be single or multiple pulses which can be controlled in times: otherwise alternatively they may be on-off pulses, figure below shows a simple circuit giving on-off pulse signals.This circuit uses saturable core transformer. When the anode is positive, the thyristor will turn on if the transformer is unsaturable. When the switch is closed, the transformer will get saturated and the thyristor will not fire. 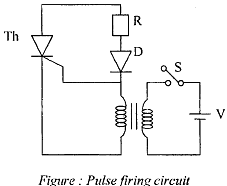 4. UJT Firing A uni-junction transistor circuit used for tiring of a thyristor is as shown in figure. Capacitor C1 charges by R1 C1 combination with UJT breaks down and the capacitor C1 discharges through pulse transformer connected with the gate. 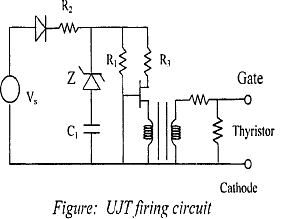