where,ζ = Torsional shear stress induced at the outer surface of the shaft.r = Radius of the shaft.T = Torque or twisting moment.J = Second moment of area of the section about its polar axis.C = Modulus of rigidity.l = length of the shaft.θ = Angle of twist in radians on a length

Power transmitted by a shaft (in watts) 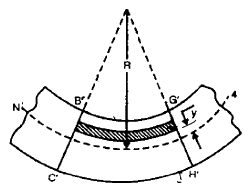 where,M = Bending moment acting at the given sections = Bending stressI = Moment of inertia of the cross-section about neutral axisy = distance from the neutral axis to extreme fibreR = Radius of curvature of beam.

is known as section modulus.