Introduction:DC machine is a highly versatile conversion device. It can meet the demand of loads requiring high starting torques, high accelerating and decelerating torques.D C machines is easily adaptable for device requiring wide-range speed control and quick reversals.DC machine possesses a high degree of flexibility.DC motors are almost universally employed in steel and aluminium rolling mills, power shovels, electric elevators, rail board locomotives.Constructional Features:In a d.c. machines, the field winding is on the stator and the armature winding is on the rotor. DC machine has mainly two parts.Stator part:Yoke:For large d.c. machines, yoke is made by fabricated steel. It has two functions.It provides path for the pole flux ø and carries half of it, i.e. ø/2.It provides mechanical support to the whole machine.Field Poles:It consists of pole core and pole shoe. The pole core is made from (1.5 mm ) thick cast steel but the pole shoe is laminated and fixed to the pole core appropriately.Note:In modern d.c. motors to be driven through power electrons converters, all stator part requires laminators for reducing eddy-currently loss therefore yoke (Frame) and pole core etc are laminated.Field winding:The pole is excited by a winding wound around the pole core, called field winding or exciting winding it is prepared from copper.Field winding is mainly three types which depend on types of machines.For d.c. series machine, small no. of turns of large cross-section are used. Because in series winding, the current flow through winding is more then for current bearing conductor, large cross section or thick wire is used.For d.c. shunt machine, large no. of turns of small cross-section. It means thin wire is used.For d.c. compound machine, both shunt and series field winding are used.Interpoles:These are fixed to the yoke in between the main poles of a d.c. machines.These are tapered with sufficient sectional area at the root to avoid magnetic saturation. connected in series with the armature so that its magnetomotive force is proportional to armature current.Remember:Interpoles are used for improving voltage commutation.Compensating winding:To eliminate the effect of armature reaction.Used for only large d.c. machine.The windings are placed in the slots cut in the pole faces of a d.c. machine and connected in series with the armature circuit.Brushes:Brushes are made of carbon for small d.c. machines and of electro-graphite for all d.c. machines.These are housed in box-type brush holders attached to the stator end covers, or yoke.A small spring keeps the brushes pressed on-the commutator surfaces.Rotor Part:Armature Core:It is made from 0.35 to 0.50 mm thick laminations of silicon steel to keep down the iron losses.t serves the twin purpose.Housing the armature coils in the slots.Providing the low-reluctance path to the magnetic flux ø/2. Armature Winding:The armature winding is made from copper. It consists of large number of insulated coils, each coil having one or more turns.These are placed in slots and connected in series and parallel depending upon the winding.There are basically two types of winding: Lap windings ,Wave windings.Commutator:It is build up of wedge-shaped segments of high conductivity hard-drawn copper to reduce its wear and tear.Hub H and Rung R are insulated from commutator segments by mica sheet M and V-shaped so as to prevent the segments from flying out due to the centrifugal forces.Shaft:Hub H of commutator and spinder in large machines or armature core in small machines and bearing are mounted on shaft. End covers are connected to the yoke on one-side and to the bearings and shaft on the other sides.Generated E.M.F in D.C. Machines:For the 2-pole d.c. machine, one full pitched N-turn coil is shown in figure. One copper ring is split into two portions, which are insulated from each other and also from the shaft on which these are mounted.The two ends of the coil are connected to these two copper segments, on which two stationary carbon brushes are resting under suitable spring pressure. These copper segments as a whole are called commutator.A commutator performs two important functions in a dc machine— the first one is to convert alternating quantities to direct quantities or vice-versa and the second function is to keep the rotor or armature m.m.f stationary in space.

Alternating emf generated in N-turn coil is converted to dc by commutator.The variation of field density along the air gap periphery is depicted in Figure shown below: Only fundamental sine component of the flux-density wave is considered. The rotor is assumed to revolve at a clockwise speed of ωr and/sec.The emf induced in a, a' is zero, since the instantaneous velocity of the coil is parallel to the magnetic flux and the rate of flux cutting is zero. After 90º travel of the coil, the emf induced given by equation (3.14) is maximum, since each foil side lies in the peak of the flux density wave and the rate of flux cutting is maximum. The direction of emf in coil-sides a, a' as determined by right hand rule, is indicated by dot and cross respectively, Figure (c). Further, coil sides a and a' are connected via the commutator segments, to brushes B1 and B2 respectively. If output terminals are connected to the load, current comes out from brush B1 and enters at brush B2. Therefore, in Figure (c), brushes B1 and B2 acquire positive and negative polarities respectively. In the position shown in Figure (d), the emf induced is zero and after a further travel of 90º, the emf induced in the coil is maximum, Figure (e), but of reversed polarity.Brush B1 is always in contact with side which is under the south pole and brush B2 is always in contact with that coil-side which comes under the north pole.The polarities of the brushes B1 and B2 remain positive and negative respectively.The voltage available across the brushes B1 and B2 is unidirectional.The emf ec induced in one coil at any time t,

Here ωr is armature speed in electrical radians per second.

Average emf per conductor E2 = PnøIf Z is the total number of armature conductors arranged in a parallel paths, then series conductors between brushes are Z/a.Voltage Ea appearing between the brushes. Ea = (Average emf per conductor) × (number of conductor in each parallel path)Speed in mechanical rad/sec. ωm = 2πnOutput voltage Ea = Ka øωmWhere constant Ka = ZP/2πaKa depend upon the armature winding design.For dc machines, the armature winding is always a double layer winding and is of two types, namely lapconnected type and wave connected type.In lap winding, the number of parallel paths a is equal to the number of field poles, i.e. a = p.In wave winding, the number of parallel paths a is always 2 irrespectively of the number of field poles, i.e. a = 2 whatever the number of field poles may be.Commutation Process:The reversal current in the armature coil by means of brush and commutator bars is called commutation process.Just before the armature coil reaches the brush, it carriers current (Ic) in one direction soon after the armature coil has traversed the brush width, the coil current gets reversed to (–Ic).Brushes are stationary and commutator segment is rotating, one coil is kept short-circuit by one brush during commutation.Number of brushes or number of poles are responsible for how many number if coils are undergoing to commutation simultaneously.The dc machine coils and commutator bars are represented as shown in figure.

Here the two ends of the coil are connected to adjacent bars (lap-connected winding is assumed).Assumed:♦ the brush width is equal the bars width and♦ the mica insulation between the bars is of negligible thickness.The brush is fully on bar-1 and coil 1 carries current

from   L (left) to R (right). The brush delivers a current 2IC. the direction of armature rotation is taken from left to right.When brush makes equal areas of contacts with bars 1 and 2, each bar delivers IC to the brush and coil 1 carries no current.With further rotation of the armature and bars, area of contact between bar 1 and brush starts decreasing and therefore the current delivered by bar 1 decreases from Ic to say i1. Now the coil 1 carries current Ic – i1 from R to L, figure (d) and the current carried by bar 2 is (2Ic – i1) so that output current is again 2Ic as before.The time required by the coil current to change from + Ic to – Ic, is called the commutation period Tc. The interpoles of appropriate polarity are strengthened so that in interpolar zone; the armature cross flux is neutralized and in addition some flux is produced there. This additional flux in the interpolar zone induces rotational emf in the commuted coil in such a direction as to oppose the reactance voltage. If this rotational emf due to the additional inter-polarflux is equal and opposite to the reactance emf, then the resultant emf in the commutated coil would be zero and the therefore zero current in that coil would amount to sparkless commutation.Inter-poles are designed to provide more mmf than the armature mmf in the commutating zone.MMF and FLUX Density Waveforms:The current distribution under each pole of a dc machine is uniform and is equivalent to a constant current sheet of proper polarity.Armature-reaction:The armature m.m.f. produces two undesirable effects on the main field flux and these are:♦ Net reduction in the main field flux per pole.♦ Distortion of the main field flux wave along the air-gap periphery 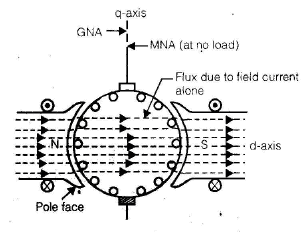 Reduction in the main flux per pole reduces the generated voltage and torque, whereas the distortion of the main-field flux influences the limits of successful commutation in dc machines.

Figure (a) shows the flux path for the main poles of a 2-pole dc machine at no load, i.e. with no armature currents.

When the dc machine is loaded, currents flow in the armature winding. 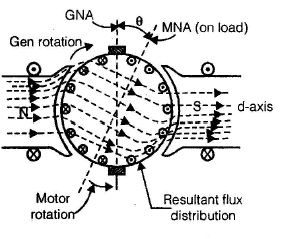 Resultant flux ØR is seen to be more than the main field flux Øf at no load. This is, however, not true because of magnetic saturation in one of the pole tips of each pole. A geometric neutral axis (GNA) is along the quadrature axis of the dc machine. Magnetic neutral axis (MNA) is always perpendicular to the axis of resultant field flux.