(a) Silica prevents cracking, shrinkage & warping of bricks hence help in providing uniform shape to the bricks.(b) If it is in excess it destroys to concession b/w the particles hence brick becomes too brittle.

(3) Lime: -Harmful ingredient in bricks(a) Lime also prevents the shrinkage in bricks.(b) If it in excess it causes the brick to melt during the burning process. Hence results in its last shape.(c) During the burning of the bricks, limestone gets converted into the quick line which absorbs the moisture & undergoes slaking as the result of which it leads to cracking & disintegration of bricks.

(4) Oxide of iron:-(a) Iron oxide helps in silica & lime fuse with each other thereby imparts strength to the bricks.

(b) It also induces reddish-brown tint in the bricks.

(a) Presence of magnesia also prevents the shrinkage in bricks and induces yellow tint in it.

Harmful ingredients present in brick earth:-(1) Lime:
When a desirable amount of lime is present in the clay, it results in good bricks, but if in excess, it changes the colour of the brick from red to yellow. When lime is present in lumps, it absorbs moisture, swells and causes disintegration of the bricks. Therefore, lime should be present in finely divided state and lumps, if any, should be removed in the beginning itself.(2) Iron pyrites:-
Presence of Iron pyrites leads to crystallization and disintegration of the bricks during the burning due to their oxidation.

(3) Alkalies :-
-Alkalies act as a flux during the burning process.
-If they are in excess they leads to firing of bricks with each other thereby results in its twisting and warping

-Presence of alkalies also leads to efflorescence and staining of the bricks.

-Presence of stones & pebbles in brick earth leads to the formation of weak and porous bricks, due to the reduction in the area through which lead gets transferred.

1. The Bricks should be attested table moulded, well burnt & free from cracks.

3. The Bricks should produce clear metallic ringing sound when struck with each other (soundness test)

4. The Brick should posses uniform homogeneous structure along any selection i.e. it should be free from voids (structure test)

5. The Bricks when immersed in water for 24hrs should not absorb more than 20% of water by weight in case of 1st class bricks, any by nor more that 22 % in case of 2nd class brick.

7. The brick should not break into pieces when dropped on level ground form the height of 1m. (Toughness test)

8. The brick should possess sufficient hardness as does not shown any impression when scratched with finger nail. (Hardness test)

9. The bricks when immersed in water for 24 hrs should not show any sign or efflorescence.(Alkali test)

Manufacturing of bricks is carried out in four distinct operations :-

(a) Unsoiling:-In unsoiling top 200mm of the soil is thrown and is not used for the preparation of bricks as it consists of most of the impurities.

(b) Digging :- In this process soil is dug out  & thrown over the level field to make it ready for next operation of cleaning(c) Cleaning :-It is the process in which stones, pebbles, vegetative matter or organic matter or any other impurity present is brick earth is removed.

(d) Weathering :-It is the process in which cleaned clay is exposed to the atmosphere for few weeks to few months in order to carry out its softening / mellowing / ripening / weathering

(e) Blending :-It is the process in which different ingredients of brick earth are spread over the weathered clay in required proportions.

(f) Tempering :-It is the process in which required plasticity is induced in the brick earth so as the make it feel for the next operation of moulding pug mill

- Tempering is generally carried out in pug mill.

-Moulding is the process of giving desired shape & size to the brick.
-Moulding is done with the help of which may either be of wood or steel.
-Size of which is kept to be approximately 8 to 12 % greater than the desired size of the bricks, in order to account for the shrinkage during drying & burning.
-A depth of marks is approximately 10mm to 20mm is place over the surface over the bricks during the loading which is termed as frog mark. that serves following two purposes
-It is used to indicate the trade name of the manufacturer
-It act as a key during the laying of the brick one over each other. 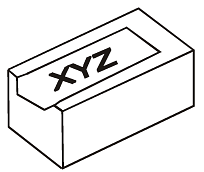 -Moulding of the bricks can be done either with the help of nand or machine. According they are classified as hand molded of machine moulding bricks.

(3) Drying :-
-Moulded bricks if are directly burnt without drying, it may result in its cracking or disintegration, due to excessive loss of moisture from it.

-Hence, drying is carried out before burning in which its moisture content is reduced up to 2%
-Drying of bricks can be carried out either naturally or artificially.
- During the drying of the bricks they are never placed along their force but they are always placed along the edges in order to increase the rate of evaporation.

(a)Clamp Burning
-Clamp is a temporary structure generally constructed over the ground with a height of about 4 to 6 m. It is employed when the demand of the bricks is lower scale and when it is not a monsoon season.
-This is generally trapezoidal in plan whose shorter edge among the parallel sides is below the ground and then the surface raising constantly at about 15 degrees to reach the other parallel edge over the ground.
-A vertical brick and mud wall is constructed at the lower edge to support the stack of the brick. First layer of fuel is laid as the bottom most layer with the coal, wood and other locally available material like cow dung and husk.
-Another layer of about 4 to 5 rows of bricks is laid and then again a fuel layer is laid over it. The thickness of the fuel layer goes on with the height of the clamp.
-After these alternate layers of the bricks and fuel the top surface is covered with the mud so as to preserve the heat.
-Fire is ignited at the bottom, once fire is started it is kept under fire by itself for one or two months and same time period is needed for the cooling of the bricks.

Disadvantages of Clamp burning:
-Bricks at the bottom are over-burnt while at the top are under-burnt.
-Bricks loose their shape, and reason may be their descending downward once the fuel layer is burnt.
-This method can not employed for the manufacturing of large number of bricks and it is costly in terms of fuel because large amount of heat is wasted.
-It can not be employed in monsoon season.(b) Kilns:-
Kiln is a large oven used for the burning of bricks. Generally coal and other locally available materials like wood, cow dung etc can be used as fuel. They are of two types:
(a) Intermittent  Kilns.
(b) Continuous Kilns.

(a) Bull trench kiln:
Bull's trench kiln consist of a rectangular, circular or oval plan shape. They are constructed below the ground level by excavating a trench of the required width for the given capacity of brick manufacturing. 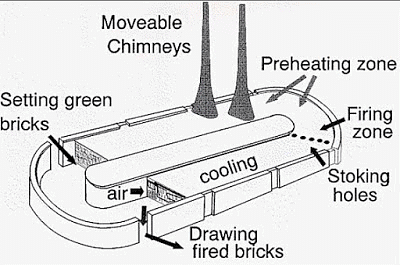 This Trench is divided generally in 12 chambers so that 2 numbers of cycles of brick burning can take place at the same time for the larger production of the bricks. Or it may happen that one cycle is carried out at one time in all the 12 chambers by using a single process in the 2-3 chambers at the same time.

The structure is under-ground so the heat is conserved to a large extent so it is more efficient.  Once fire is started it constantly travels from one chamber to the other chamber, while other operations like loading, unloading, cooling, burning and preheating taking place simultaneously.

Such kilns are generally constructed to have a manufacturing capacity of about 20,000 bricks per day. The drawback of this kiln is that there is not a permanent roof, so it is not easy to manufacture the bricks in the monsoon seasons.

(b) Hoffman kilns :-
The main difference between the Bull's trench kiln and the Hoffman kilns are:
-Hoffman's kiln is an over the ground structure while Bull's Trench Kiln is an underground structure.
-Hoffman's kiln have a permanent roof while Bull's trench Kiln do not have so it former can be used in 12 months a year to manufacture bricks but later is stopped in the monsoon season.

Hoffman's kiln is generally circular in plan, and is constructed over the ground. The whole structure is divided into the 12 chambers and all the processes takes place simultaneously like in Bull's trench Kiln.

(c) Tunnel type kilns:-
-These kilns are in the form of the tunnels, which may either be rectangular, circular or oval in plan.
-It consists of stationary zones in which loading burning & cooling of bricks is carried out simultaneously.
-Bricks are placed either on trolley or conveyor belts & are passed through different stationary zones in tunnels.
-Requirement of land in these type of kilns is comparatively more.

3. Closer :-The portion of brick cut along its length is termed as closer.Type of closer :-(1) Queen closer 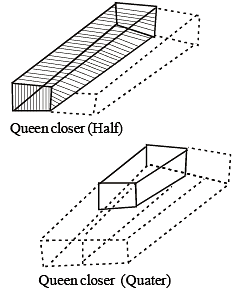 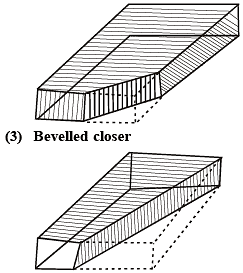 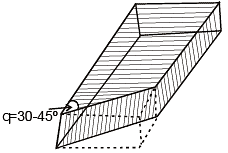 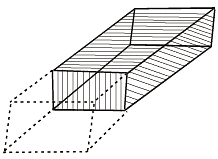 5. Quoin : -It is the exterior angle along the face of the wall i.e. greater than equal to 90º 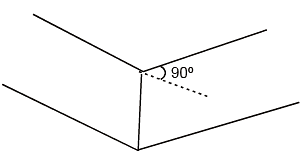 English Bond:-
-It is the arrangement of bonding that consists of alternate courses of header and stretcher placed one over each other
-In order to take alignment of vertically joints to be in single straight line, queen closer is placed next to quoin header.
-For walls having thickness in the add multiples of half brick thick each course consists of header on one face and stretcher on 0ther face.
-Queen closer is never placed either at the start or end of any course, as it is liable to get displace.
-Min lap available to the stretcher in each course is 1/4th the length of the brick. 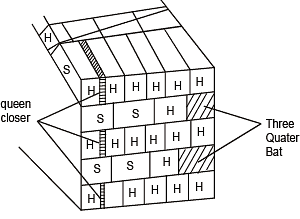 FLEMISH BOND:-
-It is the arrangement of bonding in which each course consist of alternate header & stretcher placed next to each other.
-In order the brake a alignment of vertical joints to be in single straight line Quoin closer is placed next to Quoin header.
-For the walls having thickness in the odd multiples of half brick thick English bound is found to be stronger that Flemish bond.
-Flemish bond is aesthetically more pleasing than English bond
-Skilled masonry work is required for the construction than English bond as no of half bats are used in this case due to which wastage is comparatively less. 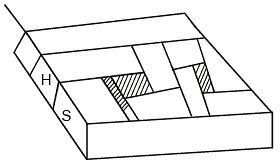 STRETCHER BOND:-
-It is the arrangement of bonding in which the bricks are laid along the stretcher in each course.
-In order the break the alignment of vertical joints to be in single straight line half bat are used in alternate courses. 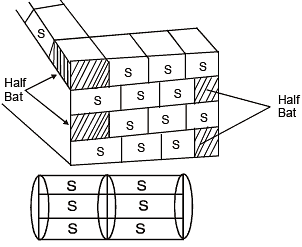 HEADER BOND:-
-It is the arrangement of bonding in which each course consists of header.
-It order to break the alignment of vertical joints to be in straight line, three quarter bat is used in each course 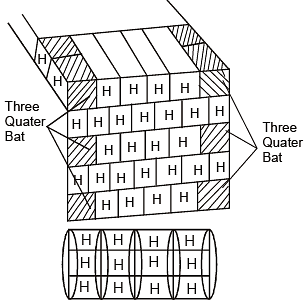