A device Designed to separate and prevent the flow of current between conductors and also provide insulation to the conductor from the ground.

Insulator Materials The insulators are mainly made of either glazed porcelain or toughened glass.

Drawback : Any sealed air impurity will lower the dielectric strength of porcelain.

Drawback : The moisture condenses very easily on the surface of glass and hence its use is limited to about 33 kV

Types of Insulators There are mainly four types of insulators used for overhead transmission lines.

1. Pin type Insulators The pin type insulator is designed to be mounted on a pin which in turn is installed on the cross arm of the pole.

For lower voltages generally one piece type of insulators is use. For high-voltage transmission lines larger, string pin type insulators are used. The highvoltage pin type insulators differ in construction from low voltage type in that they consist of two or three pieces of porcelain cemented together. These pieces from what we call petticoats are designed to shed rain and sleet easily. These are available for use up to 50,000 volts.

The main advantage of the pin type insulators is that it is cheaper.

2. Suspension Type Insulators With the increase in operating voltage, the insulation required increases. Transmission lines use extremely high voltages, 220 kV, for example. At these voltages the pin type insulators become bulky, cumbersome and costly. Besides, the pin which must hold it would have to be inordinarly long and large. In order to meet the problem of insulators for these high voltages, the suspension insulator was developed.

3. Strain Insulators Sometimes a line is to withstand great strain, for instance at a dead end or at a corner or on sharp turns. In such a circumstance for LT (low tension) line shackle insulators are used but for HT (high tension) transmission lines strain insulators consisting of an assembly of suspension type insulators are used.

4. Shackle Insulators The shackle or spool type insulator, which is easily identified by its shape, is usually used on it lines, Both the low-voltage conductors and the house service wires are attached to the shackle insulator.

Such insulators are of egg shape and used in guy cables, where it is necessary to insulate the lower part of the guy cable from the pole for the safety of the people on the ground. These are provided at a height of about 3m from the ground level.

An insulator string is a chain of two or more strain insulators that are coupled together to increase the total insulation level of the assembly. 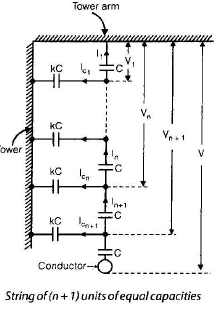 Remember: Every insulators string is provided with an arcing horn at the tower end and the line end so that in the event of insulator flashover, the arc may take the path between the horns and stay clear of the insulator string. where V is the operating voltage and Cn is the capacitance between the guard ring and the pin of the nth unit.Let V = mv, where k is the number of units used.ThenwnvkC = (m – n)vwCn

Long Cross-arm Method It is clear from the expression of string efficiency that the string efficiency increase with the decrease in value of K. The ratio of capacity to earth/capacity per insulator, K can be reduced by making use of long cross arms. But the limitations of cost and strength of the supports does not allow the cross arms to be too long.