SPECIFIC YIELD (Sy) :The specific yield of an unconfined aquifer is the ratio of volume of water which will flow under saturated condition due to gravity effects to the total volume of aquifer (V).

SPECIFIC RETENTION:The specific retention of an unconfined aquifer is the ration of volume of water retained against gravity effect to the total volume of aquifer (V)

where Vwr =  Volume of water retained under gravity effect where, S = Drawdown in the wellK = Permeability coefficient in m/s.R = Radius of influence in ‘m’150m ≤ R ≤ 300mr = Radius of test well in ‘m’.Results of dupits theory are not accurate because ‘R’ is based on empirical relation. 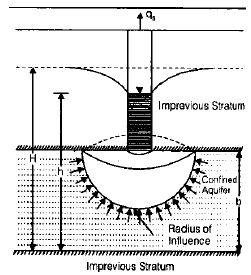 where, r = radius of pipe, h = head of water above the base of pipe, it may include gravity head and pressure head.

where, L = Length of perforated section of pipe

r = Radius of pipeh = head of which water is added