Chapter 7:CONCRETEWORKABILITY:-It  is the property of concrete by virtue of which it can be easily mixed, transported, placed compacted and finished. It may also be defined as amount or useful internal work required to be done by concrete in order to achieve full compaction.

a) Water Content:–Water/cement ratio is one of the most important factor which influence the concrete workability. Generally, a water cement ratio of 0.45 to 0.6 is used for good workable concrete without the use of any admixture. Higher the water/cement ratio, higher will be the water content per volume of concrete and concrete will be more workable.

Measurement of Workability:–Workability of the concrete can be measured by any of the following test:(1) Slump test(2) Compaction factor test(3) Flow table test(4) Vee-bee consistometer test

(1) Slump test:–
-It is the most common test that is used to measurement for the workability of concrete.
-It consists of a mould that is in the form of frustum having top dia of 10cm, bottom dia of 20cm & ht. of 30 cm.
-Concrete to be tested is filled in this mould in 4 layers where in each layer is compacted 25 times with the help of the rod.
-After the mould is completely filled it is lifted immediately in vertically upward direction which causes the concrete to subside & the subsidence of the concrete is referred as slump which may also be defined as the difference level of the ht. of mould & the highest point of subsided concrete.
-The slump of the concrete represents its workability as higher is the value of slump higher its workability.
-This test is not suitable for the concrete that either possessing very high workability or very low workability.

(3) Flow Table Test :—-This test is performed for the concrete which posses very high workability.-It consists of a circular table 76 cm in dia & a mould is in the form of frustum having the top dia of 17 cm & bottom dia of 25 cm & ht. of 12 cm.-Concrete to be tested is filled in the mould in two layers that is placed over the flow table, when the mould is completely filled, it is removed immediately & the table is raised & dropped by 12.5 mm, 15 times in 15 sec. the spread of the concrete on the table is noted in at least 6 direction that is further used to represent its workability.

(5)  Vee-bee Consistometer test :-This test is used to find workability of slump concrete less than 50 mm.-It consists of a mould in the form of the frustum that is placed inside the cylinder which is further placed over the vibrating table.-Concrete to be tested id filled in the mould which is raised immediately & cylinder is subjected to vibration.-The time required by the concrete to assume the cylindrical shape is noted that is referred as Vee-bee degrees & is further used to represents the workability of the concrete

(b) Strength:–
(i) Compressive Strength:–-Remove the specimen from water after specified curing time and wipe out excess water from the surface.-Take the dimension of the specimen to the nearest 0.2m-Clean the bearing surface of the testing machine-Place the specimen in the machine in such a manner that the load shall be applied to the opposite sides of the cube cast.-Align the specimen centrally on the base plate of the machine.-Rotate the movable portion gently by hand so that it touches the top surface of the specimen.-Apply the load gradually without shock and continuously at the rate of 140 kg/cm2/minute till the specimen fails-Record the maximum load and note any unusual features in the type of failure.

Split-Cylinder Test:
-A standard test cylinder of concrete specimen (300 mm X 150mm diameter) is placed horizontally between the loading surfaces of Compression Testing Machine. The compression load is applied diametrically and uniformly along the length of cylinder until the failure of the cylinder along the vertical diameter. To allow the uniform distribution of this applied load and to reduce the magnitude of the high compressive stresses near the points of appplication of this load, strips of plywood are placed between the specimen and loading platens of the testing machine. Concrete cylinders split into two halves along this vertical plane due to indirect tensile stress generated by poisson's effect.

Assuming concrete specimen behaves as an elastic body, a uniform lateral tensile stress of ft acting along the vertical plane causes the failure of the specimen, which can be calculated from the formula as, 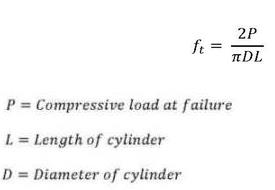 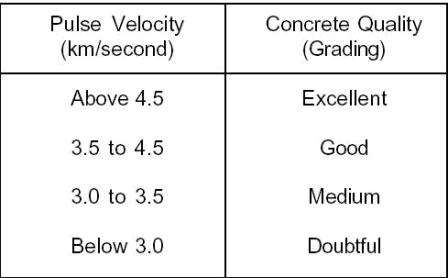