TIMBER-Timber used for construction activities is derived from the trees that are generally of two types.(1) Exogenous trees(2) Endogenous trees 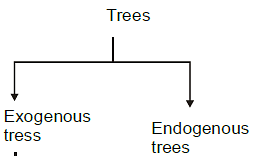 (1) Exogenous trees :–-These are the types of trees which grow in bulk by increasing in the outward direction.-These trees consist of circular rings along their horizontal section which is added up each year hence are being termed as annual rings and are being used to ascertain the age of the tree.-Timber used in engineering activities is mostly derived from these trees only.-These trees are further of two types.(A) Conifer Trees(B) Deciduous TreesConifer trees :–-These are the type of trees which never shed their leaves until new one are grows hence are also being termed as evergreen trees.-These trees bare cone shaped fruit hence are known as conifer trees.-These trees passes distinct annual rings and indistinct Medullary rays.-The wood obtained from these trees is soft, light, weak, resinous and light in colour, hence, these trees are also termed as soft wood trees.Example— Chir, Deodar, Pine, Spruce

(2) Endogenous Trees:–-These are the trees which grow in bulk in inward direction and consist of fibrous mass throughout their longitudinal section hence, have limited engineering application.Ex. :– Bamboo, Cane, Palm. 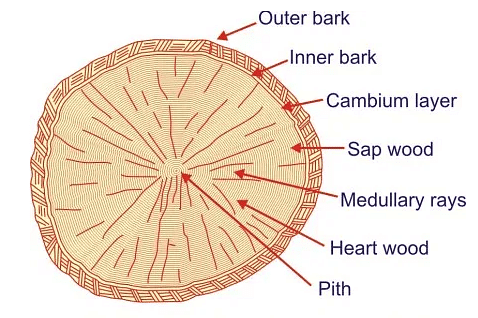 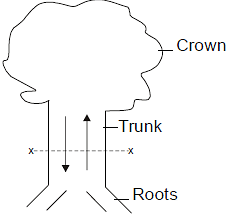 (1) PITH (MEDULLA) :–-The inner most central portion of the tree is termed as pith.-It entirely consists of cellulose that nourishes the tree in its young age.-It is the darkest portion of the trees that signifies that does not take any active part in the growth of the tree.-As the tree grows old it pith ceases to be active and represents the decay wood.

(2) HEART WOOD:–-The inner annual rings surrounding the pith constitutes the heart wood.-Its colour is also comparatively dark that represents the dead portion of the tree i.e. it also do not take any active part in the growth of the tree but imparts strength & rigidity to  it. From an engineering point of view heart wood is most suitable for construction activities.

(3) Sap wood (Alburnum):—-The outer annual rings in between the heartwood & cambium layer constitutes the sap wood.-This portion of the tree takes the active part in its growth and its colour is comparatively light than that of heart wood & pith.

(4) Cambium layer:—-Cambium layer consists of sap that is still not being converted into sap wood. Hence, it represents the future growth of the tree.-If due to any reason Bark of the tree is removed exposing the cambium layer, the cells of the wood ceases to be active that finally results in death of the tree.

(5)  Medullary Rays :–-These are the radiate fibers that extends from pith to the cambium layer and holds the annual rings of heartwood and sap wood together in position, thereby imparts strength to the timber seen in transverse direction.

(6) Bark:–-It is the protective covering provided around the cambium layer in order to safeguard the future growth of the tree.

Felling of Trees:–-Felling of the tree should be done when it attains sufficient maturity, as if under mature tree is cut it would yield soft wood, and if over mature tree is cut it would yield decayed wood. In either of the cases wood can not be used for engineering activity.-Optimum age for the felling of trees varies between 50 to 100 years.-The trees should be cut such that maximum proportion of wood is obtained from it. For which the cuts are made at the section just above the ground.-The felling of the trees should be carried out in the season when the movement of the sap is minimum.-Hence, it is generally avoided in autumn and spring when sap is in vigorous motion.-In hilly areas, cutting of the trees is done in mid-summers as in winters rainfall occurs, and in plain area cutting of the trees is done in mid-winters as in summers excessive loss of moisture may result in cracking.

(2) Seasoning of Timber:–  -Newly felled trees contains approximately 50% of the water by weight. Hence, it is dried before using it as construction material. This process of drying of the timber to make it suitable for engineering purpose is termed as seasoning.-This water in timber is generally present in two forms– (i) In the form of sap   (ii) In the form of moisture.-This water is either present in the voids or in cell walls the former water is termed as free water and the later is termed as bound water.

Boiling:  -It is the process in which logs of suitable size are immersed in water, the temperature of which is raised upto the boiling point that is maintained for the next 8-4 hrs.-Logs are removed from the water & are seasoned naturally  -Due to in temperature of the log, the rate of evaporation is that drastically reduces the seasoning period.-It is one of the quickest method available for seasoning but is comparatively more costly.-More costly.

Electrical Seasoning:-It is the method of seasoning in which alternating current is passed through the timber section which resists its movement as it is bad conductor of electricity, due to which heat is developed which raises the temperature of timber section, thereby reducing the duration of seasoning.-More costly.

Kiln seasoning:-It is the method of seasoning in which timber section is placed in a air tight chamber and fully saturated air is forced into it at the temperature of 350C to 400C.-The temperature inside the kiln is then raised due to which heating of timber section take place w/o evaporation.-The relative humidity of the air is then reduce that carries out the evaporation of the timber uniformly.

Water seasoning:-It is the method of seasoning in which timber section of suitable sizes is immersed completely in water & is subjected to the stream of flowing water.-The larger portion of the section is placed on the U side in order to create the turbulence and carry out the removal of sap.

After which, it seasoned naturally.-Water that replaces sap is removed comparatively faster thereby bringing down the seasoning duration. 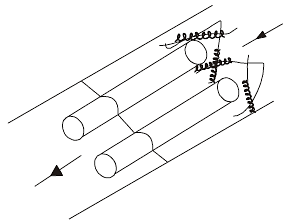 Chemical seasoning:-It is the method of seasoning in which timber secn is immersed in the solution of suitable salts that ….. the rate of evaporation. 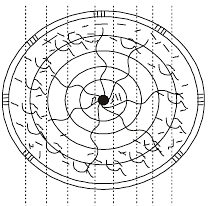 -It is the method of sawing in which the cuts are made at right angles to each other.-This method is generally adopted for the sections having indistinct modullary rays.-Sections obtained by this method are liable to bend in transverse direction.

(III) TANGENTIAL SAWING :–-It is the method of sawing in which the cuts are made tangential to the annual rings which meet each other at right angles.-This method is also adopted for the sections that have indistinct medullary rays.-Sections obtained by this method of sawing are weakest among all as in this case medullary rays are also cut which can holds the annual rings together in position. 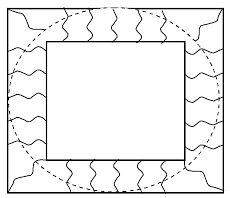 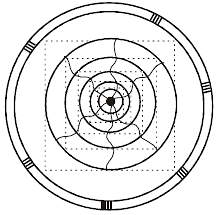 (4) Radial sawing:–-It is the method of sawing in which the cuts are made parallel to the medullary rays in radial direction that imparts decorative affect to it.-Sections obtained by this method are strongest among the all but wastage in this case is comparatively more.

(i) As Cu Treatment :– (As2 DB O5. 2H2O, CusO4 . 5H2O, CuSO4, K2Cr2O7 / Na2 Cr2O7)-It is the method of preservation in which the timber surface is coated with the solution prepared by the addition of arsenic pentaoxide, copper sulphate, potassium dichromate & sodium dichromate in water.-This process increases the resistance of the timber section against the attack of white ants.

(iii) Coal Tar :--In this method of preservation timber surface is coated with hot tar which make it resistant against the fire.-The process of application of coal tar on timber section is known as taring.-Application of tar gives unpleasant smell and reduces its aesthetic importance.

(v) Application of Oil paints & Solignum Paints:–-Oil paints & solignum paints increases the resistance of the timber against the penetration of water.

(1) Defects due to conversion:

(a) CHIP MARK:–-This defect in timber is identified by the mark of the chip over the surface of finished timber section, that is left by the parts of planning machine. 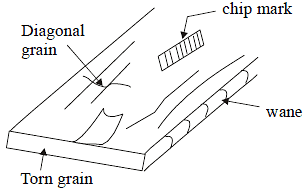 (b) Diagonal Grain :–-This defect is identified by the diagonal mark over the straight grained structure over the timber surface which is left due to improper sawing.

(c) Torn Grain :–-This defect is identified as small depression over the finished surface of the timber section that is formed due to the falling of tools during the conversion.

(d) Wane:–-This defect is identified by the presence of original rounded surface over the finished section of the timber surface.

(2) Defects due to attack of fungi : --Timber section is attacked by fungi, if & only if moisture content in it is greater than 20% and there is availability of air surrounding that section.-Defects due to fungi in timber contains.

(a) Blue stain:–-A certain type of fungi carries out the decomposition of the timber section leaving behind blue colour spots resulting in the disease termed as blue stain.

(b) Sap stain : --There are certain type of fungi that do not carries out the decomposition of the entire wood but feeds on its sap. resulting in change of its colour, and leading to the disease termed as sap stain.

(c) Brown Rot : --It is the disease of the timber that is caused due to the removal of the  cellulose from it by a certain type of fungi that leads to the development of reddish - brown stains over its surface as the disease is termed as brown rot.

(d) White Rot :- -This disease is just opposite to that of brown rot in which lignin is removed by a particular class of fungi.

(e) Dry Rot:–-This distance is found when there is no free circulation of air around the timber section, which results in the growth of certain type of fungi that carries out the decomposition of the wood & converting it into dry powdered form.

Shakes: The cracking of the timber section that results in the separation of the fibers either partially or fully is termed as shakes.Different type of shakes:– 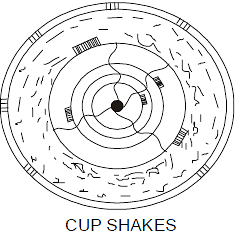 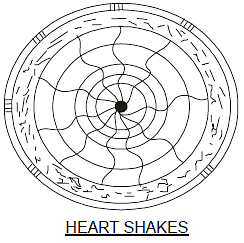 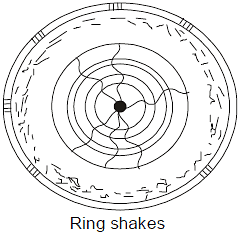 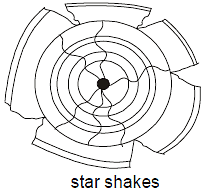