A killer Tsunami hit 11 South  Eastern Countries of Asia onthe 26th of December 2004 killing more than 1,50,000 precious lives. The count hasn’t stopped…. At the end of the day statistics only remain. The emotional, economical and ecological toll of the disaster can’t be calculated. Many villages have lost an entire generation. This was the biggest earthquake to hit the world in 40 years and no one could have thought that its effects would ripple worldwide overnight.Do you know what Tsunamis are? How they can be predicted and how you can save yourself from the deadly Tsunami? Read the section below and you will know more about it. Follow the instructions if you reside in any of the coastal states of the country.The term ‘Tsunami’ has been coined from the Japanese term Tsu meaning ‘harbour’ and nami meaning ‘waves’. Tsunamis are waves generated by earthquakes, volcanic eruptions, or underwater landslides and can reach 15m or more in height devastating coastal communities. In recorded history, tsunamis worldwide have killed hundreds of thousands of people. Tsunamis caused by nearby earthquakes may reach the coast within minutes. When the waves enter shallow water, they may rise to several feet or, in rare cases, tens of feet, striking the coast with devastating force. The Tsunami danger period can continue for many hours after a major earthquake.

In 1883, the violent explosion of the famous volcano, Krakatoa in Indonesia, produced tsunamis measuring 40 meters which crashed upon Java and Sumatra. Over 36,000 people lost their lives as a result of tsunamis that are capable of crossing oceans. Tsunamis are nearly always created by movement of the sea floor associated with earthquakes which occur beneath the sea floor or near the ocean.Tsunamis may also be generated by very large earthquakes far away in other areas of the Ocean. Waves caused by these travel at hundreds of kilometers per hour, reaching the coast several hours after the earthquake. Unlike ordinary tides, which are short, frequent and surface level, tsunami, are barely noticeable in their deep-sea formation stage. At this point despite a wavelength up to 100 km, they are shallow in depth and move at hundreds of kilometer per hour. If a quake hits Los Angeles, a Tsunami can reach Tokyo in a time less than a Jetwould take to traverse the same distance. 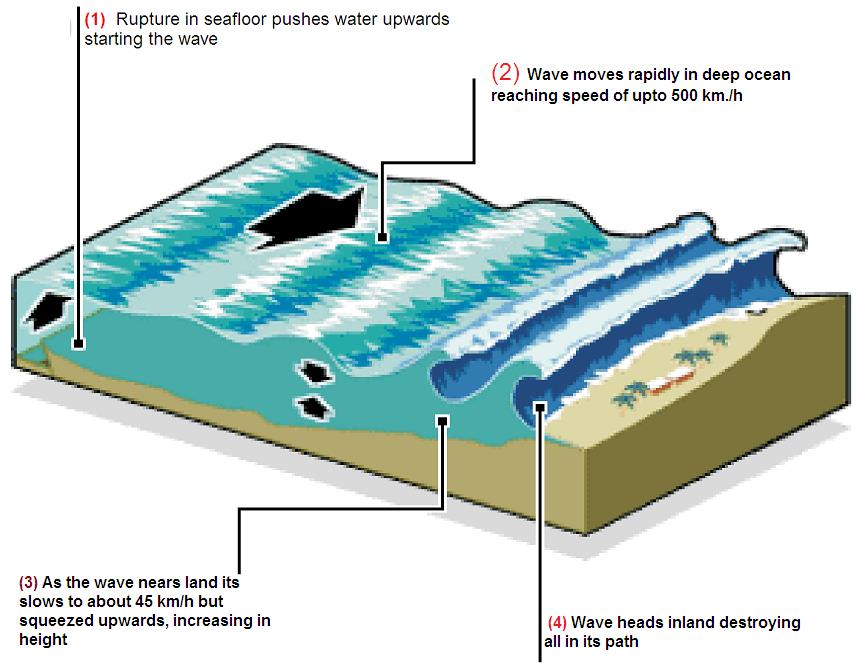 Important Facts About Tsunamis• Some tsunamis can be very large. In coastal areas their height can be as great as 10m or more (30m in extreme cases), and they can move inland several hundred meters.• All low-lying coastal areas can be struck by tsunamis.• A tsunami consists of a series of waves. Often the first wave may not be the largest. The danger from subsequent tsunami waves can last for several hours after the arrival of the first wave.• Tsunamis can move even 50 km per hour on coastal plain, faster than a person can run.• Sometimes a tsunami causes the water near the shore to recede, exposing the ocean floor. This is nature’s Tsunami warning and should be heeded.• The force of some tsunamis is enormous. Large rocks weighing several tons along with boats and other debris can be moved inland several meters by tsunami wave activity. Homes and other buildings are destroyed. All floating material and water move with great force and can kill or injure people.• Tsunamis can occur at any time of day or night.• Tsunamis can travel up rivers and streams that lead to the ocean.Detecting TsunamisWith the use of satellite technology it is possible to provide nearly immediate warning of potentially tsuna-migenic earthquakes. Warning time depends upon the distance of the epicenter from the coast line. The warning includes predicted times at selected coastal communities where the tsunami could travel in a few hours. Coastal tidal gauges can stop tsunamis close to the shore, but they are useless in deep oceans. Tsunami detectors, linked to land by submarine cables, are deployed 50 odd kms. out at sea. ‘Tsunameters’ transmit warnings of buoys on the sea surface, which relay it to satellites Yield not to misfortunes, but advance all the more boldly against them.