The document Chapter Notes: Winds, Storms & Cyclones Notes | Study Science Class 7 - Class 7 is a part of the Class 7 Course Science Class 7.
All you need of Class 7 at this link: Class 7

The pressure exerted by air on all bodies at all times in all directions is called air pressure.

The pressure exerted by air on all bodies at all times in all directions is called air pressure. When air moves at high speeds, it creates a low pressure area. The air inside a balloon exerts pressure in all directions, and makes it blow up. Air opposes the motion of a moving object. This is called air resistance. That is why you have to exert yourself and pedal hard when you ride a bicycle. Another example in which air pressure can be observed: Take a glass and fill only 1/3 of it with water. Cover the mouth of the glass with an index card. Now hold the card in place and invert the glass over a sink and remove your hand from the card. The card sticks to the glass. This is due to air pressure. The air outside exerts an upward pressure on the index card. This air pressure is more than the weight of the water in the glass.

Winds are caused by variations in air pressure. A wind blows from a region of high pressure to a region of low pressure. The speed of the wind mainly depends on the difference between the pressures of the air in the two regions.High speed winds are known to blow away thatched and tiled roofs in rural and semi-urban areas. Strong winds can uproot trees and electric poles, and even snap cables. 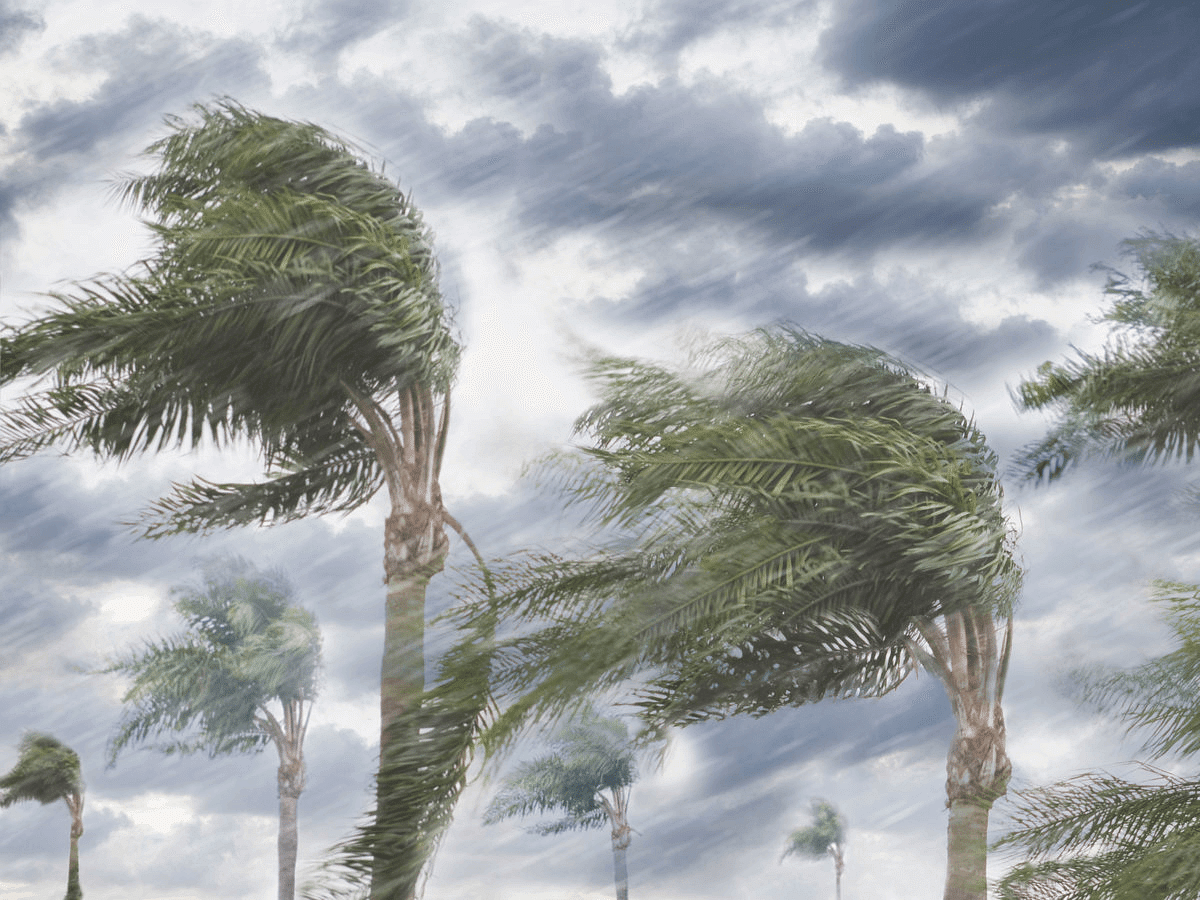 The instrument used to measure the speed of wind is called the anemometer. It is usually fixed on the top of a building.

Air expands on heating, and the expanded air pushes for more space.

Winds are also formed due to uneven heating of land and water in coastal areas. As the earth rotates on its axis from west to east, these wind currents are not exact. There is a difference in the temperatures of the air over sea and over land. Cold winds from the South Pole move north towards the equator, and whereas winds from the North Pole move south towards the equator.

The word monsoon is derived from the Arabic word "mausam," which means season. The winds from the ocean carry water in the form of vapours, resulting rains over land. These are called monsoon winds.Thunderstorms and Cyclones 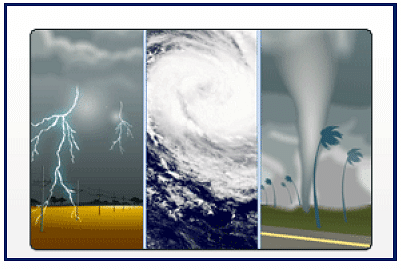 A storm with lightning and thunder is called a thunderstorm. It occurs due to the convection of air in hot and humid areas.

A storm with lightning and thunder is called a thunderstorm. It occurs due to the convection of air in hot and humid areas.

A natural calamity caused by difference in air pressure in the atmosphere is called a cyclone. A cyclone is a violently rotating windstorm. Cyclones are dangerous. Cyclones begin as thunderstorms.In tropical regions like India, thunderstorms are common, but very few thunderstorms convert into cyclones. In India, the eastern coast is more vulnerable to cyclones than the western coast.In different parts of the world, cyclones are known differently. For example, in America, a cyclone is referred to as a hurricane, while the Filipinos and Japanese called it a typhoon.The largest tropical cyclone recorded was Typhoon Tip that struck Japan in 1979. At its peak strength, the diameter of its eye wall was 2220 kilometres. The wind speeds were recorded at 305 kilometres per hour.Formation of Cyclones

The formation of a cyclone depends on the speed and direction of the wind, temperature and humidity.

During a thunderstorm, do not:

Humidity is the amount of water vapour in the atmosphere. As the humidity in a region increases, the difference in temperature also increases. This results in the formation of a cyclone.

Winds moving at high speeds are known as gales.

Eye of a Cyclone

The calm and clear area at the centre of a cyclone is called the eye of the cyclone.

A rotating column of high speed winds that appears as a dark funnel-shaped cloud reaching from the ground to the sky is called a tornado. A tornado may form within a cyclone. A tornado forms due to the effect of low pressure in the eye of a cyclone. Objects near the base of a tornado, such as cars, dust, debris and even houses, are sucked into its funnel and thrown out at the top.More than a thousand tornadoes occur every year across the world. Most occur in the United States. Tornadoes occur regularly in the regions around the Atlantic Ocean. Weak tornadoes travel with wind speeds of 50 to 60 km/hr, while a violent tornado can travel at a speed of about 400 km/hr. A tornado is a natural disaster, but not as dangerous as a cyclone. 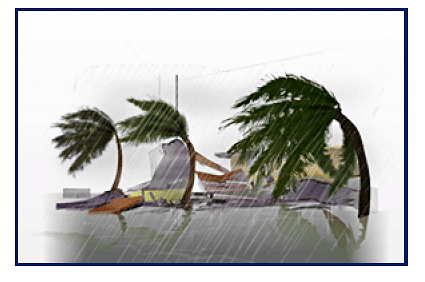 A high wall of water moving towards the shore from the ocean is called a storm surge.

The combination of a storm surge and a tide is known as a "storm tide". The most dangerous storms are the ones where the storm surge arrives on the top of a high tide, and then the storm reaches an area that might otherwise have been safe.

The department that carries out a scientific study of the atmosphere and focuses on weather forecasting and processes. Tropical cyclones are given names. The names are selected from a list decided by the national meteorological organisation of a country, or by a committee of the World Meteorological Organisation. The names of tropical cyclones that cause major death or destruction are not used again, as a tribute to the people who lose their lives in the disaster.Cyclone Alert

A warning issued 48 hours before the expected time of a cyclone.

A warning issued 24 hours before the expected time of a cyclone.

A cyclone causes destruction through:

Safety measures taken by the government:

To keep people safe and secure during a cyclone, the government takes certain measures, such as:

Safety measures to follow before and during a cyclone:

The document Chapter Notes: Winds, Storms & Cyclones Notes | Study Science Class 7 - Class 7 is a part of the Class 7 Course Science Class 7.
All you need of Class 7 at this link: Class 7