The document Chapter Notes - Chapter 4: The Mughal Empire, SST, Class 7 | EduRev Notes is a part of the Class 7 Course Social Studies (SST) Class 7.
All you need of Class 7 at this link: Class 7

•In the Middle Ages, a very powerful empire was that of the Mughals. From the latter half of the 16th century, they expanded their kingdom from Agra and Delhi until in the 17th century they controlled nearly all of the subcontinent.

• The legacy left by them stands unparalleled.

• Who were the Mughals: The Mughals were descendants of two great lineages of rulers.

(i)  Babur, the first Mughal emperor, captured Delhi in 1526by defeating Ibrahim Lodi in the Battle of Panipat. 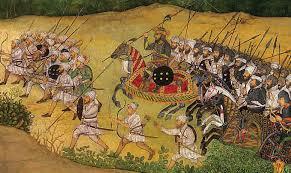 (iv) Jahangir took the campaign against Sikhs and Ahoms.

(vi) Aurangzeb waged a long battle in the Deccan.

(i) The Mughals did not believe in the rule of primogeniture, where the eldest son inherited his father’s estate. (ii) They followed the custom of coparcenary inheritance or a division of the inheritance amongst all the sons.

Mughal Relations with other Rulers-:

(i) The Mughal rulers campaigned constantly against rulers who refused to accept their authority.

(iii) Mughals gave mansab and jagirs which helped them to expand their territories.

(iv) The main source of income available to Mughal rulers was the tax on the produce of the peasantry.

i)  Brahmanas, Jesuit priests who were Roman Catholics and Zoroastrians.

ii)  Akbar’s works are found in the book Akbarnama written by Abul Fazal.

iv) While Akbar was at Fatehpur Sikri, he started a discussion on religion with the ulemas, Akbar divided his kingdom into provinces called subas governed by a Subedar.

(v) The discussions took place in the ibadat khana.

vii) It led Akbar to the idea of Sulh-ikul or universal peace.

The Mughals empire in the 17th Century and After-:

i) The administrative and military efficiency of the Mughal Empire led to great economic and commercial prosperity. ii) The Mughal emperors and their mansabdars spent a great deal of their income on salaries and goods.

iii) The wealthier peasantry and artisanal groups, the merchants and bankers profited in this economic world.

(v) By 18th century several provinces started declaring independence though they continued to regard Mughals as their masters.