The document Chapter Notes - Going to School Notes | Study EVS for Class 4 - Class 4 is a part of the Class 4 Course EVS for Class 4.
All you need of Class 4 at this link: Class 4

Children in our country go to school in a lot of different ways as mentioned below.

It rains very much in some areas such as Assam. Sometimes after the rain, there is knee-high water everywhere. Children use the Bamboo Bridge to go to school.

To cross the wide and deep river to get to school Children use Trolley in Ladakh.

There is a strong iron rope across the river. On both the sides it is tied tightly with strong trees or rocks. There is a trolley (an open box made of wood) attached with the rope. 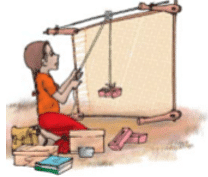 We can see pulleys being used 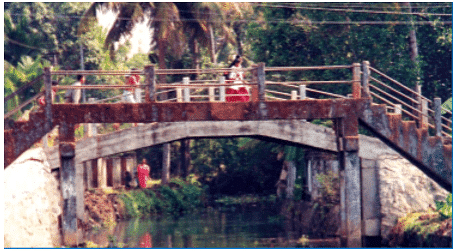 We often need to go across some water bodies, so we use bridges. These are made of cement, bricks and iron rods. The bridge may also have steps.

Differences between a Cement Bridge and a Bamboo Bridge

In some parts of Kerala, children use a vallam (small wooden boat) to reach school. It is a traditional boat in Kerala which is used to cross small rivers and lakes.

Some other kinds of boats 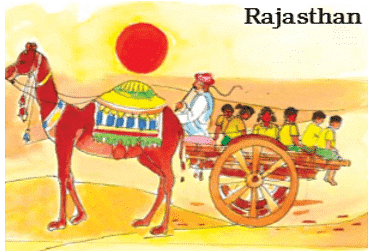 Sand is all around in the desert in Rajasthan. It also gets very hot in the day. Children ride in a camel-cart to reach school.

6. Bullock-cart (Village in the plains) 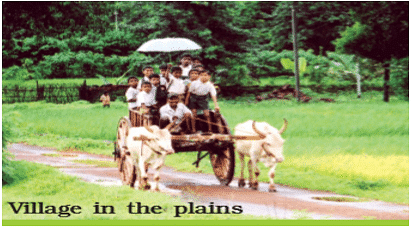 In villages in the plains, children ride bullock-cart. It goes slowly through the green fields. Some of the bullock carts have roofs but mostly they are without roofs. If it is too sunny or raining, children use umbrellas.

Bullock carts have wheels made of wood with iron rims. 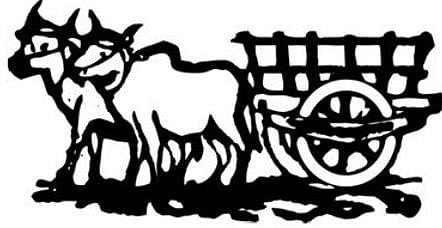 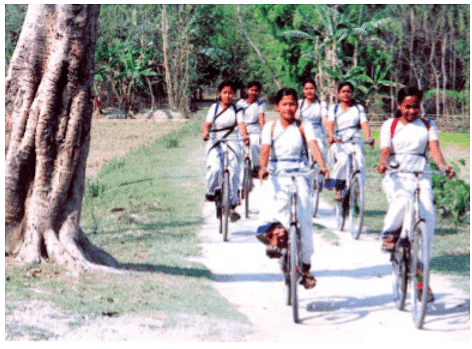 Some children ride bicycles on the long road to school. At first, girls here did not go to school, because it was too far. But now groups of 7-8 girls easily ride even through the difficult roads.

Jugad is something that is made by using limited resources with minimal expanses in an innovative way. This vehicle is also made by putting together various available parts to serve as a passenger carrier. It is used in Gujarat.

It is a special transport. 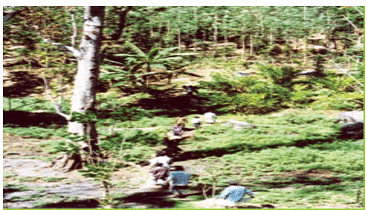 At many places, children go through thick forest to reach school. At some places, it is so thick that even sunlight does not pass through. It is also very silent and can only hear the sounds of different birds and other creatures.

In the Northern Hills, children go to school through miles of snow. They hold hands and walk carefully.If the snow is soft, their feet sink into it. When the snow is frozen, they may slip and fall, so they have to stay careful.

In many party of Uttarakhand children live in the mountains. The paths are rocky and uneven. Although it’s difficult to walk on these but local children easily learn to race up and down.

But no matter whether there is a dense forest, farms, mountains or snow on the way, children manage to reach school. 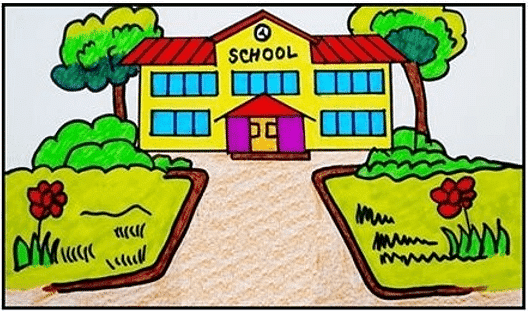 The document Chapter Notes - Going to School Notes | Study EVS for Class 4 - Class 4 is a part of the Class 4 Course EVS for Class 4.
All you need of Class 4 at this link: Class 4