The document Chapter Notes - Inside Our Earth Class 7 Notes | EduRev is a part of the Class 7 Course Social Studies (SST) Class 7.
All you need of Class 7 at this link: Class 7

(i) The earth comprises of three layers: crust, mantle and core. 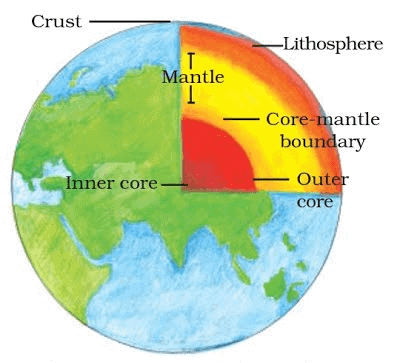 Fig: Interior of the Earth

(ii) Constant changes take place inside as well as outside the earth.

What is the Interior of the Earth?

(i) The Earth is made of several concrete layers. It is about 35 km on the continental masses and only 5 km on the ocean floors.

(ii) The uppermost layer over the earth’s surface is called the crust.

(iii) Silica and alumina are the main mineral constituents of the continental mass. It is, thus, called sial.

(vi) The innermost layer is core with a radius of 3,500 km. As it is made of nickel and iron, it is called nife. (iv) Rocks roll down and break into small fragments and these smaller particles are called sediments. These sediments are transported, compressed and hardened to form layers of rocks. These types of rocks are called sedimentary rocks.  (v) Igneous and sedimentary rocks can change into metamorphic rocks under great heat and pressure.  (vi) The process of transformation of the rock from one to another is called the rock cycle.

(vii) Rocks are made of different minerals. Minerals are naturally occurring substances which have certain physical properties and definite chemical composition.