The document Chapter Notes - Is Matter Around Us Pure Class 9 Notes | EduRev is a part of the Class 9 Course Science Class 9.
All you need of Class 9 at this link: Class 9

1. When we say that something is pure, it means that all the constituent particles of that substance are the same in their chemical nature. A pure substance always consists of a single type of particles.

2. When we look around, we can see that most of the matter around us exist as mixtures of two or more pure components. For example, sea water, minerals, soil etc., are all mixtures.

4. Types of mixtures: Depending upon the nature of components that form a mixture, we can have different types of mixtures. Mixtures which have a uniform composition throughout, are called homogeneous mixtures. For example, salt in water and sugar in water. Mixtures which contain physically distinct parts and have non-uniform composition are called heterogeneous mixtures. For example, mixture of sodium chloride and iron filings, salt and sulphur.Activity: Perform an activity to differentiate between solution, suspension and colloidal solution. (a) Distribute the following samples to four groups A, B, C and D of a class.A few crystals of copper sulphate to group A.One spatula is full of copper sulphate to group B.Chalk powder to group C.A few drops of milk or ink to group D.(b) Ask each group to add the sample to water and stir using a glass rod.(c) Direct a beam of light from a torch through the beakers.(d) Leave the mixture undisturbed for a few minutes.(e) Filter the mixtures 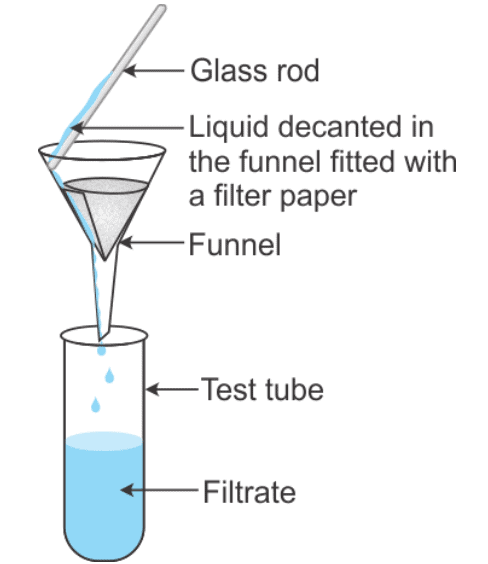 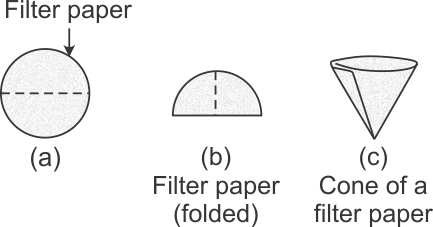 We observe that groups A and B get a clear solution of copper sulphate although with different colour density.

5. Solution: A solution is a homogeneous mixture of two or more substances. Lemonade and soda water are example of solutions. A solution is not necessarily a liquid containing a solid, liquid or gas dissolved in it. Solid solution (alloys) and gaseous solution are also possible.

6. Alloys: Alloys are homogeneous mixtures of metals and cannot be separated into their components by physical methods. For example, brass is a mixture of approximately 30% zinc and 70% copper.

8. Tincture of iodine is a solution of iodine in alcohol. Aerated drinks like soda water are solutions of carbon dioxide as solute and water as solvent.

10. Properties of a solution: (a) A solution is a homogeneous mixture.(b) Particles of a solution are smaller than 1 nm (10-9 metre) in diameter. Therefore, they cannot be seen by naked eye.(c) Because of small size, they do not scatter light.(d) Solute particles cannot be separated from the mixture by filtration.

13. Solubility: The amount of solute present in a saturated solution at a given temperature is called its solubility

15. Different substances in a given solvent has different solubilities at the same temperature.

(a) Mass by mass percentage of a solution

(b) Mass by volume percentage of a solution

17. Suspension: A suspension is a heterogeneous mixture in which the solute particles do not dissolve but remain suspended throughout the bulk of medium. Particles of a suspension are visible to the naked eye. For example, chalk powder in water.

19. Colloidal solution: A colloidal solution is a heterogeneous mixture in which the solute particles do not settle down but remain suspended. Here the particle size of the solute is between 1 nm to 100 nm. Colloidal particles cannot be seen with a naked eye but they scatter light thus making the path of light visible. For example, milk and starch solution. 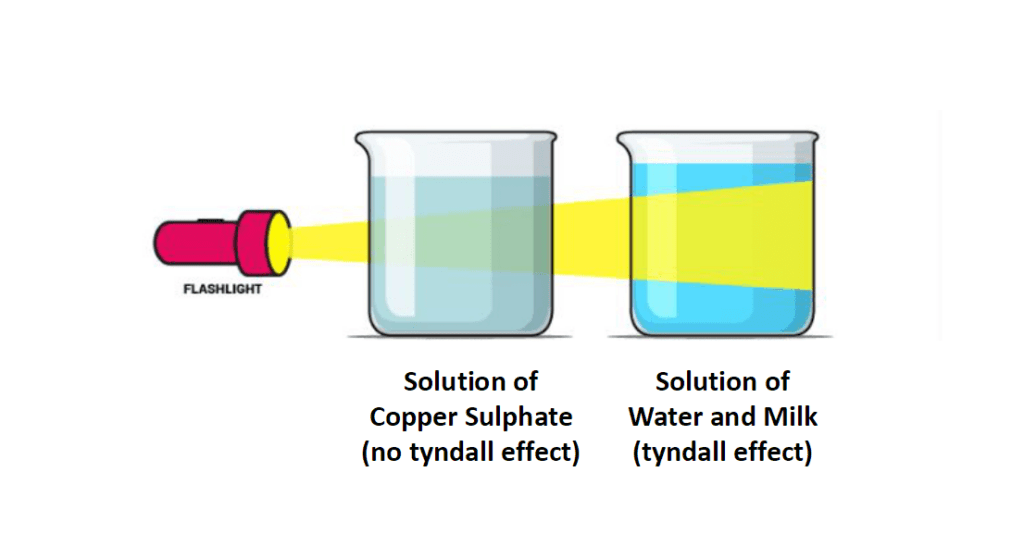 23. Separating components of a mixture: Heterogeneous mixtures can be separated into their respective constituents by physical methods like handpicking, sieving, filtration etc.Activity: Perform an activity to obtain coloured component (dye) from blue/ black ink.Materials required: Burner, tripod stand, beaker, water, watch glass, ink.Procedure:(a) Fill half the beaker with water.(b) Put a watch glass on the mouth of the beaker (see the figure).(c) Put a few drops of the ink on the watch glass.(d) Start heating the beaker.(e) Continue heating as the evaporation goes on and stop heating when you do not see further change on the watch glass. 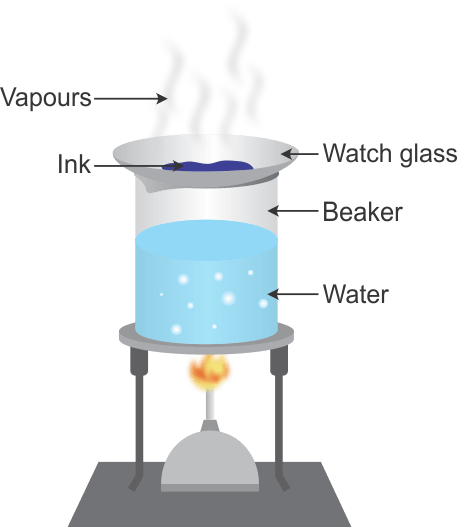 We observe that: Water has evaporated from the watch glass. A residue of ink has been obtained on the watch glass. Ink could be a mixture of different components which can be seen and separated by chromatographic method.

24. Separation of cream from milk: Cream can be separated from milk by the process of centrifugation which is done by centrifuging machine. This separation can also be achieved by using a milk churner.The principle of centrifugation is that the denser particles are forced to the bottom and lighter particles stay at the top when spun rapidly. 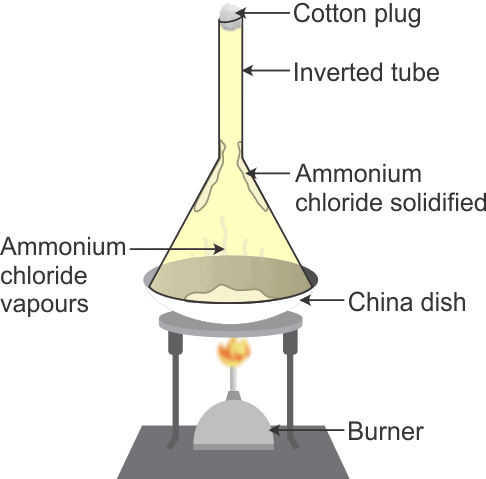 Separation of Common salt and Ammonium Chloride27. Separation of components of black ink: It is amazing to know that black ink is not a single substance. It is a mixture of number of dyes which can be separated by a process known as chromatography.Activity: To separate the components of black ink.Materials required: Strip of filter paper, pencil, ink, jar, water, glass rod, paper clips.Procedure : (a) Take a thin strip of filter paper.(b) Draw a line on it using a pencil about 3 cm above the lower edge.

(c) Put a small drop of ink at the centre of the line; Let it dry.(d) Lower the filter paper into a jar containing water such that the drop of ink on the paper is just above the water(e) Leave it undisturbed for an hour. 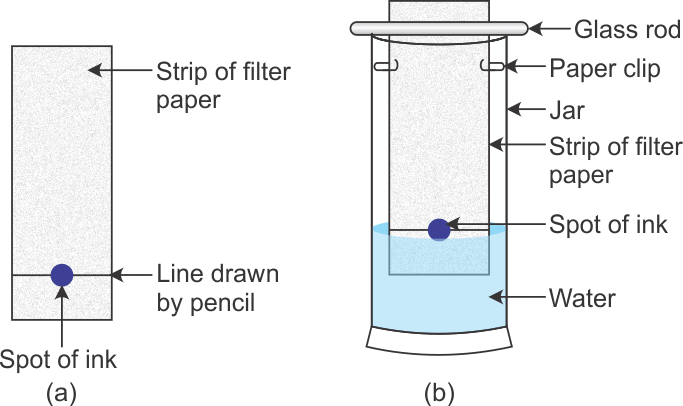 It will be observed that components of the ink will rise up the filter paper strip in the form of spots of different colours at different heights. Thus, we shall be able to identify and separate different constituents of black ink.As water rises on the filter paper, it takes along with it the dye particles. The coloured component which is more soluble in the water rises faster. In this way, the colours get separated.28. Application of chromatography: To separate(a) colours in a dye,(b) pigments from natural colours, and(c) drugs from blood.29. Separation of a mixture of two miscible liquids: Components of a mixture of two miscible liquids can be separated by using the technique of distillation.Activity: Perform an activity to separate the components of a mixture of two miscible liquids.Materials required : Clamp, distillation flask, tripod stand, burner, thermometer, rubber corks, water condenser, beaker.Procedure: Let us separate a mixture of immiscible liquids acetone and water(a) Take the mixture in a distillation flask. Fit it with a thermometer.(b) Set up the apparatus as shown in figure below. 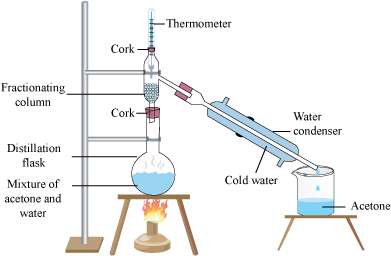 (c) Heat the mixture slowly keeping a close watch at the thermometer.(d) Acetone, being more volatile, vaporises first, condenses in the condenser and gets collected in the beaker as shown in the figure.(e) Water is left behind in the distillation flask.(i) It will be observed that vapours of acetone are formed first because out of acetone and water, acetone is more volatile. Its boiling points (56°C) is lower than that of water (100°C).(ii) Thermometer reading becomes constant at 56 °C till the whole of acetone has vaporised.(iii) Boiling point of acetone is 56 °C.(iv) Acetone vapours cross over to the condenser where they condense into liquid acetone. This fraction is separated and collected in the beaker. Water is left in the distillation flask.

Activity: Here a fractionating column, as shown in figure below, is used. A simple fractionating column is a tube packed with glass beads. The beads provide surface for the vapours to cool and condense repeatedly. Only the more volatile component will be able to cross over to the condenser. Fractional Distillation31. Separation of different gases of air: Air is a homogeneous mixture of gases like nitrogen, oxygen, etc. The components can be separated by fractional distillation. The flow diagram of the process is given below: Flow Diagram of Separation of Components of Air

(a) Increasing order of boiling points of the gases isNitrogen < Argon < Oxygen(b) As air is cooled, oxygen will form the liquid first as it has the highest boiling point.The industrial plant used for the separation of components of air is shown in figure below:

Separation of Components of Air

36. Elements: Lavoisier, a French chemist defined an element as the basic form of matter that cannot be broken down into simpler substances by chemical reactions. Elements can be divided into the following main three types of substances:

(b) They have silvery-grey or golden-yellow colour.

(c) They conduct heat and electricity.

(d) They are ductile that means they can be drawn into thin wires.

(e) They are malleable. That means they can be beaten into thin sheets.

(f) They are sonorous i.e., they make a ringing sound when hit.

(a) They display a variety of colours.

(b) They are poor conductors of heat and electricity.

(c) They are not lustrous, sonorous or malleable.

Some elements have intermediate properties between those of metals and non-metals. They are called metalloids. Examples of metalloids are boron, silicon and germanium.

37. Some facts about elements:

(a) The number of elements known at present is more than 100. Ninety two elements are naturally occurring and the rest are man-made.

(b) Majority of the elements are solids.

(c) Eleven elements are in gaseous state at room temperature.

38. Compounds: A compound is a substance composed of two or more elements chemically combined with one another in a fixed proportion.

Activity 9. Perform an activity to show the formation of a compound.

(b) Mix the substances with a spatula.

(c) Heat the china dish on a flame till red hot.

(d) Remove the flame and allow to cool.

39. Mixture: If we simply mix iron filings with powdered sulphur and grind them together (no heating), we. obtain a mixture.

40. Comparison between mixtures and compounds: 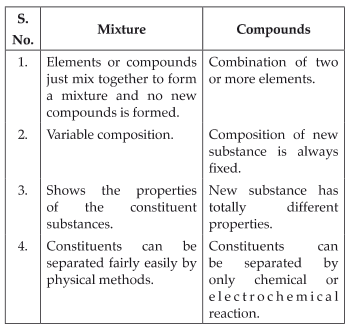 41. We can summarise the physical and chemical nature of matter as under: