Everything available in our environment which can be used to satisfy our needs, provided, it is technologically accessible, economically feasible and culturally acceptable can be termed as ‘Resource’. Human beings themselves are essential components of resources. They transform material available in the environment into resources and use them. 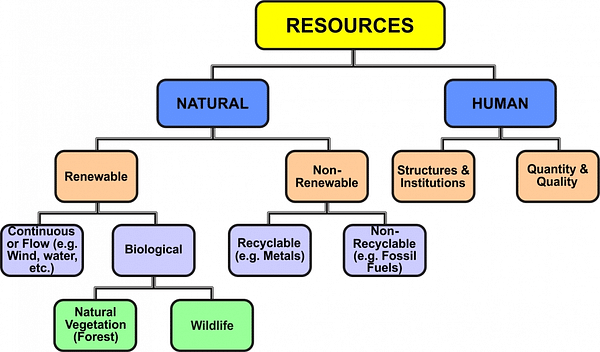 The resources can be classified as:

1. On the basis of Origin – biotic and abiotic

2. On the basis of Exhaustibility – renewable and non-renewable

3. On the basis of Ownership – individual, community, national and international

4. On the basis of Status of Development – potential, developed stock and reserves.

1. On the Basis of Origin 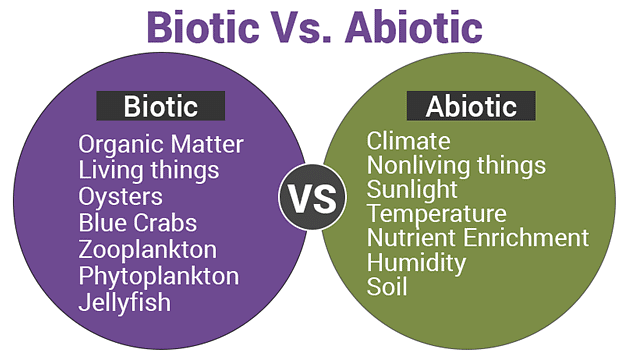 (a) Biotic Resources: These are obtained from the biosphere and have life such as human beings, flora and fauna, fisheries, livestock etc.

(b) Abiotic Resources: All those things which are composed of non-living things are called abiotic resources.Example: rocks and metals. 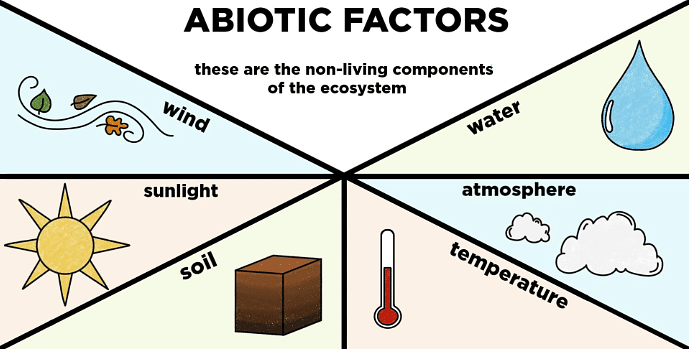 2. On the Basis of Exhaustibility

(a) Renewable Resources: The resources which can be renewed or reproduced by physical, chemical or mechanical processes are known as renewable resources.

Question for Chapter Notes: Resources & Development
Try yourself:Which one of the following type of resource is iron ore?
View Solution
3. On the Basis of Ownership

(a) Individual Resources: The resources owned privately by individuals are called Individual resources. For example Plot, houses etc. owned by a person.

(b) Community Owned Resources: The resources which are accessible to all the members of the community. For example Public parks, picnic spots owned by a community.

4. On the Basis of the Status of Development

(a) Potential Resources: Resources that are found in a region, but have not been utilized.

Example: The regions Rajasthan and Gujarat have enormous potential for the development of wind and solar energy.

(b) Developed Resources: Resources that are surveyed and their quality and quantity have been determined for utilization.

(c) Stock: Resources that have been surveyed, but cannot be used due to lack of technology.For example water is a compound of two inflammable gases; hydrogen and oxygen, which can be used as a rich source of energy but we don't have the technical know-how to use them for this purpose.

(d) Reserves: Resources that have been surveyed and we can use them with present technology but their use has not been started are known as Reserves. Example: the water in the dams, forests etc.

Resources are vital for human survival. It was believed that resources are free gifts of nature so, human beings used them indiscriminately and this has led to the following major problems:

(a) Depletion of resources for satisfying the greed of few individuals.(b) Accumulation of resources in few hands which divides the society into rich and poor.(c) Indiscriminate exploitation of resources has led to global ecological crises such as, global warming, ozone layer depletion, environmental pollution and land degradation. 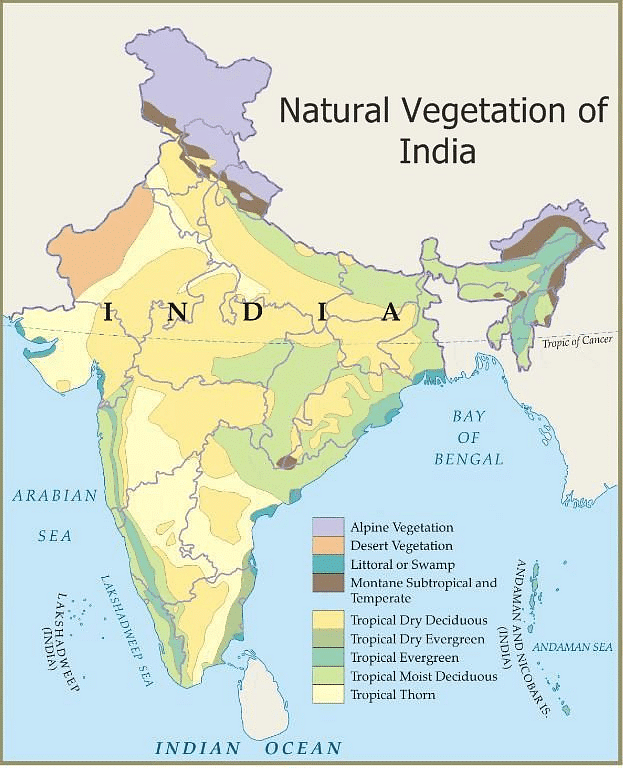 (2) Land is present in limited size so we must use it effectively. 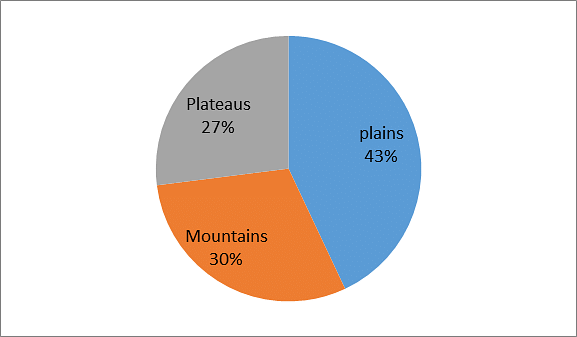 Land resources are used for the following purposes:

Land Use Pattern in India(1) The use of land is determined by: 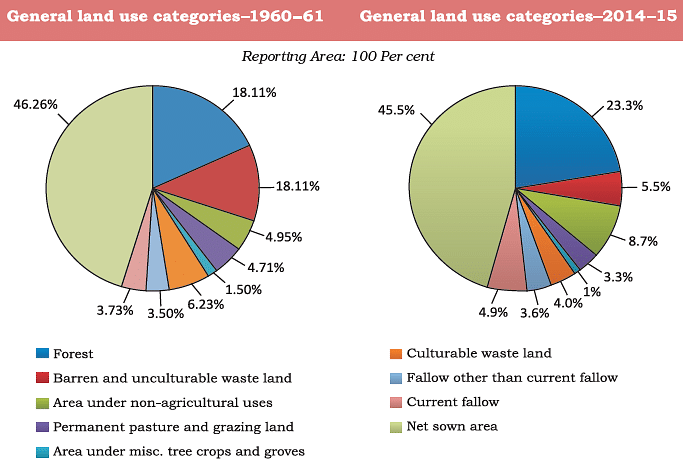 (2) Land use data, however, is available only for 93 per cent of the total geographical area because the land use reporting for most of the northeast states except Assam has not been done completely. Also, some areas of Jammu and Kashmir occupied by Pakistan and China have also not been surveyed.

(1) Human activities such as deforestation, overgrazing, mining and quarrying contributed to land degradation.

Soil is the most important renewable natural resource. It is the medium of plant growth and supports different types of living organisms on the earth.

Factors responsible for Soil Formation(1) It takes millions of years to form few centimetres of soil.(2) Relief, parent rock, climate, vegetation are important factors for soil formation.(3) Change in temperature, actions of running water, wind and glaciers all contribute to soil formation.(4) Chemical and organic changes which take place in the soil are also important for soil formation.

On the basis of the factors responsible for soil formation, color, thickness, texture, age, chemical and physical properties, the soils of India can be classified in different types:1. Alluvial Soils

(a) Entire northern plains are made of alluvial soil.

(b) Also found in the eastern coastal plains particularly in the deltas of the Mahanadi, the Godavari, the Krishna and the Kaveri rivers.

(e) Rich in potash, phosphoric acid and lime which are ideal for the growth of sugarcane, paddy, wheat and other cereal and pulse crops. 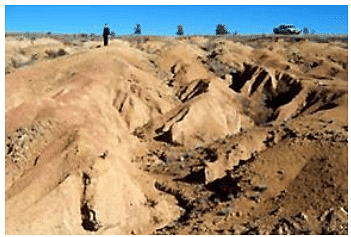 (a) Black in colour and are also known as regur soils.

(b) Ideal for growing cotton and is also known as black cotton soil.

(c) Found in the plateaus of Maharashtra, Saurashtra, Malwa, Madhya Pradesh and Chhattisgarh also along the Godavari and the Krishna valleys.

(d) Made up of extremely fine i.e. clayey material.

(e) Well-known for their capacity to hold moisture. 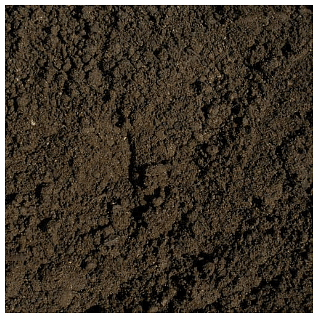 Question for Chapter Notes: Resources & Development
Try yourself: In which of the following States is black soil found?
View Solution
3. Red and Yellow Soils 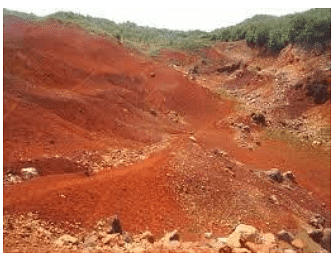 (a) Found in the areas of low rainfall in the eastern and southern parts of the Deccan plateau.(b) Also found in parts of Odisha, Chhattisgarh, southern parts of the middle Ganga plain and along the piedmont zone of the Western Ghats.(c) Develop a reddish colour due to diffusion of iron in crystalline and metamorphic rocks. 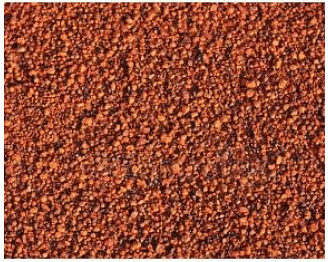 (a) Develops in areas with high temperature and heavy rainfall.(b) Found in Karnataka, Kerala, Tamil Nadu, Madhya Pradesh, and the hilly areas of Odisha and Assam.(c) Suitable for cultivation with adequate doses of manures and fertilizers.(d) Low Humus content because decomposers, like bacteria, get destroyed due to high temperature.

(a) Found in the western parts of Rajasthan.

(b) After proper irrigation these soils become cultivable. 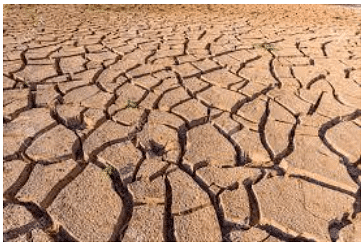 (d) Salt content is very high and common salt is obtained by evaporating the water.

(a) Found in the hilly and mountainous areas where sufficient rain forests are available.

(b) Feature differs based on location.

(c) Loamy and silty in valley sides and coarse-grained in the upper slopes.

(d) Silt in the lower parts of the valleys particularly on the river terraces and alluvial fans are fertile. 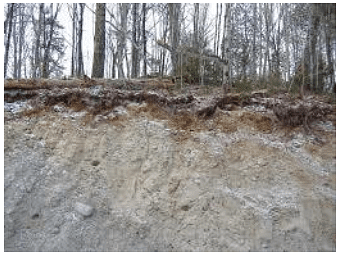 Question for Chapter Notes: Resources & Development
Try yourself:Materials in the environment which have the potential to satisfy human needs but human beings do not have appropriate technology to access them are called:
View Solution
The document Chapter Notes: Resources & Development Notes | Study Social Studies (SST) Class 10 - Class 10 is a part of the Class 10 Course Social Studies (SST) Class 10.
All you need of Class 10 at this link: Class 10
Join Course