Globalisation is an economic system associated with the free movement of goods, technology, ideas and people across the globe.

There are several silk routes, overland and by sea, knitting together vast regions of Asia, and linking Asia with Europe and northern Africa.→ Famous Chinese silk cargoes used to travel through these routes.

In the nineteenth century, economic, political, social, cultural and technological factors interacted in complex ways to transform societies and reshape external relations. Three flows or movements were identified by economists.

Rinderpest, or the Cattle Plague

The First World War (1914-18) was fought in Europe, but its impact was felt around the world. During this period the world experienced widespread economic and political instability and another catastrophic war.

Rise of Mass Production and Consumption

India and the Great Depression 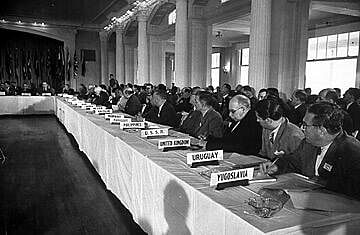 An era of unprecedented growth of trade and incomes was inaugurated by the Bretton Woods for the Western industrial nations and Japan. During this decade, technology and enterprise were spread worldwide.

End of Bretton Woods and the Beginning of ‘Globalisation’