In the last few classes, we have seen that a DC machine can work as a generator when its armature is rotated with a prime mover, and when excitation is provided to the field winding which produces the flux. However, when we have seen that we can connect a load, so that current will flow into it. However, it is not essential that a load is connected. Just a resistance is connected. It can as well be connected to a constant DC supply of voltage V t. Even then it will work as a generator provided the prime mover can run the armature at a speed, such that the generated voltage E is larger than the terminal voltage V t.So, the armature current will flow in this direction. Since, the terminal of the generator I have already connected to a constant voltage source, we can as well connect the field winding across the armature. Now, it will not behave really as a shunt generator, but it will behave like a separately excited generator with a constant voltage applied across the field in order to vary field flux. It is possible to provide a resistance which can be controlled to control the field current. Now, for this generator, we can write V t equal to E minus I a R a, where E equal to k phi. Omega phi is given by the saturation characteristics as function of I f and I L equal to I a minus I f, where I f equal to V t by R f.If we look at the power distribution, then you find that let the rotational speed of the shaft be omega and the talk provided by the prime mover be t, then the power input power output by the prime mover is p, mechanical p prime mover equal to t omega. Now, the part of the power provided by the prime mover will be lost into mechanical loss that is frictional vintage losses. So, this is a part goes out as mechanical losses. So, this is the mechanical power provided to the net mechanical power input to the generator. This is equal to also E I a.Next power loss component is the armature copper loss I a square R a. Next loss is the field copper loss which is I f square R f. Finally, the rest is the output power which is V t I l. So, the current here is, this is voltage induced is E a I a. Here, the voltage is V t I a, and here the voltage and current is V t I l. So, this is how the power flow picture will look like in this is operating as a generator. Obviously, in order for this system to work as a generator, the prime mover should be rotated. It should rotate the armature at a speed, such that with the given field excitation, the generated E m f across the armature is larger than the supplied terminal voltage and then only, it will work as a generator. Now, what will happen if the rotational speed is less such that E is less than V t? In that case, the direction of current through the same generator will reverse and now, the machine will work as a motor.(Refer Slide Time: 07:21) 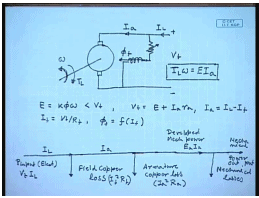 We see that in a generator mode of operation, the power input is the mechanical power input from the shaft and the output power is the electrical power which may be consumed by a resistive load, or can be fed back to the supply. So, it is not essential in order to operate this machine as a generator to have a DC supply available. This can work very easily as a self excited shunt generator supplying an insulated resistive load, but the situation is different for a motor mode of operation. Here, also the armature is connected to a DC supply of terminal voltage V t a field winding connected across the same supply.Hence, you can call it a shunt gen motor or a separately excited motor because they are connected at the same supply voltage. Normally, an additional resistance R f will be connected in the field in order to control the field current. This will produce a flux of phi f. Now, let us say at any prime, it is rotating at a speed of omega. In that case, the induced voltage E equal to k phi omega as in the previous case and we are assuming that this is less than V t. So, for this case, the current will flow into the armature and we can write V t equal to E plus I a R a I a equal to I L minus I f I f equal to V t by R f, and phi f is a non-linear function of I f given by the magnetization characteristics a power flow in this case. Now, here the input power is electrical power. That is why it is essential that a DC source be present for motor mode of operation.So, p input, this is electrical. This is equal to V t I L. The first loss encountered is the field copper loss. So, the current here is I a, and here the current was I L. Next is armature copper loss.So, this is the developed power E a I a which is converted to mechanical power. Next is the mechanical losses and the mechanical power output. So, in order to get some mechanical power output, it must be connected to a load which will provide a opposing torque t L and in steady state t L omega equal to E I a. So, you see that the same machine connected to the same supply can work either as a motor or as a generator that depends on what is the value of the back E m f at the given operating speed. If it is larger than the terminal voltage, then the machine will operate as a generator. Otherwise, it will run as a motor.(Refer Slide Time: 14:00) We find that the operating point is, actually in this case, we will have Te 1 will be negative and minus Te 2 is negative. That means Te 2 is positive. What does positive and negative mean? In this sense from the diagram we see that any talk that assist the mechanical motion, that is in the direction of motion is assumed to be positive and any talk that is in direction opposite to the motion, that is which tries to slow down the motion is negative.So, from the mechanical power point input point of view, any talk, the generated talk, if it is assisting the mechanical motion, then mechanical power is input to the machine. That means that machine is operating as a motor. The developed mechanical power assists motion. That means, electrical power is getting converted to mechanical power and causing motion. So, that is a motor and if the developed electrical torque opposes motion, then the mechanical power that is the machine is driven against the opposing torque. Then the mechanical power is input to that machine and that machine operates as a generator. Hence, we find that in this case Te 1 is negative. That means, the talk generated by machine 1 is opposing motion. Hence, it is operating as a generator while talk generated by machine 2 is positive. It is assisting motion. This is operating as a motor.So, we find that if the torque speed characteristics of a machine is above the other, then that works as a motor naturally, because then it will try to drive the other machine at a higher speed and hence, the other machines backing if will be larger than terminal voltage and it will operate as a generator, we could have reversed the roles particularly if we find that the torque speed characteristics depends on several parameters. 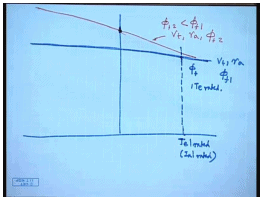 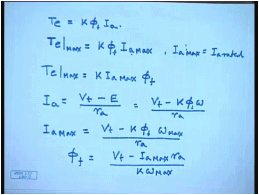 Let us say to phi f 1, what will happen? The armature current will still remain same. So, the torque generated Te is k phi f I a. The maximum torque that can be generated irrespective of the value of phi is at any given flux. So, at any reduced flux, the maximum power that can be generated since I a max is constant which is equal to I a rated. Then Te max is equal to k I a max phi f. What is the corresponding machine speed at a current of I a max? We know I a equal to V t minus E by R a equal to V t minus k phi omega by R a. So, I a max equal to V t which is constant minus k phi f corresponding omega max by R a. So, what is phi f? If for a constant value of I a, what is the relationship between I a, and phi a, and omega phi f equal to V t minus I a max R a by k omega max.(Refer Slide Time: 40:23) So, substituting this, we get Te max. We find that everything on the right hand side is constant. That means, Te max omega max equal to constant. So, when you reduce field flux, it turns out that within the given armature current limit, the maximum mechanical power that you can develop either in the motoring or in the generating mode is constant. So, the operating point the machine must be operated bounded by these two vertical lines which indicate the armature current limit, and this rectangular hyperbola which are indicated, which are restricted again by armature current limit, but when the field flux is reduced below its rated value. So, this is called the maximum power, the constant power operating zone, constant power zone.Now, below this corresponds to rated armature voltage. We are by some means if we can reduce the armature voltage below the rated value, then the limits corresponding to rated armature current become straight line. So, this and you can generate constant maximum rated torque. This is called the constant torque zone. A DC shunt machine must. The operating point of the DC shunt machine must be within this region, so that the armature current limit is not exceeded whatever way we may achieve that.(Refer Slide Time: 44:10) 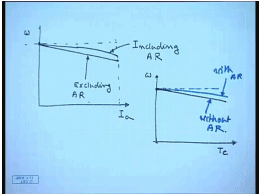 Let us say, we have a DC machine 8 kilowatts, 230 volts, 1200 RPM. The armature resistance r a equal to 0.7 ohm and no load voltage, the field current is tested the no load voltage set at E at no load and set at 250 volts. The motor runs at no load is 1250 RPM and draws armature current 1.6 amperes. Now, under this condition, you apply a load such that under loaded condition, I a, becomes equal to 40 ampere and N at load becomes equal to 1150 RPM. Find out how much reduction in flux per pole happens? Delta phi f due to armature reaction.Now, we know the speed N equal to E divided by k phi equal to V minus I a R a by k phi or phi equal to I a R a by k n. So, phi at no load was, at no load V was equal to 250 volts, Ia was 1.6 amperes into R a was 0.7 and the speed was 1250 RPM.(Refer Slide Time: 52:15)