The family of curves that shows the relation between current and voltage are known as characteristic curves.

There are two important characteristics of a JFET.

1. When Vds is applied and it is increasing the drain current Id also increases linearly up to knee point.

2. This shows that FET behaves like an ordinary resistor. This region is called as ohmic region.

3. Id increases with increase in drain to source voltage. Here the drain current is increased slowly as compared to ohmic region. 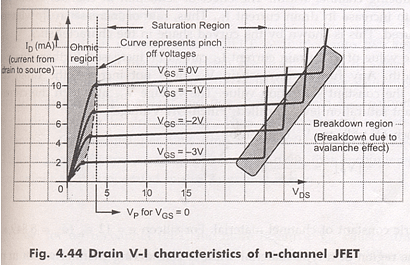 4.  It is because of the fact that there is an increase in Vds. This in turn increases the reverse bias voltage across the gate source junction. As a result of this depletion region grows in size thereby reducing the effective width of the channel.

5. All the drain to source voltage corresponding to point the channel width is reduced to a minimum value  and is known as pinch off.

6. The drain to source voltage at which channel pinch off occurs is called pinch off voltage(Vp).

This is known as shokley’s relation.

These curves show the relationship between drain current Id and gate to source voltage Vgs   for different values of Vds. 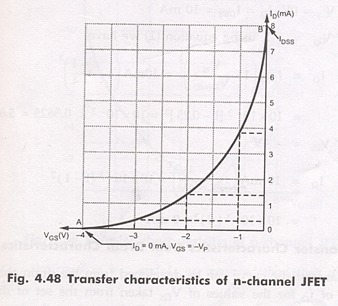 DIFFERENCE BETWEEN Vp AND Vgsoff –

Why the gate to source junction of a JFET be always reverse biased ?

There is one more important characteristic of JFET reverse biasing i.e. JFET's have extremely high characteristic gate input impedance. This impedance is typically in the high mega ohm range. With the advantage of extremely high input impedance it draws no current from the source. The high input impedance of the JFET has led to its extensive use in integrated circuits. The low current requirements of the component makes it perfect for use in ICs where thousands of transistors must be etched on to a single piece of silicon. The low value of current helps the IC to remain relatively cool, thus allowing more components to be placed in a smaller physical area.

The electrical behavior of JFET may be described in terms of certain parameters. Such parameters are obtained from the characteristic curves.

Mathematically, it is expressed as rd=∆Vds/ ∆Id where Vgs is held constant.

It is also called forward transconductance. It is given by the ratio of small change in drain current (∆Id) to the corresponding change in gate to source voltage (∆Vds)

Mathematically,  the transconductance can be written as-

The linear small signal equivalent circuit for the FET can be obtained in a manner similar to that used to derive the corresponding model for a transistor.

We can express the drain current Id as a function of the gate voltage and drain voltage Vds.

If both gate voltage and drain voltage are varied, the change in the drain current is approximated by using Taylor's series considering only the first two terms in the expansion: 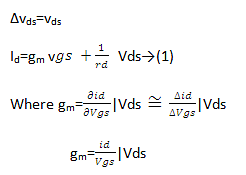 The second parameter rd  is the drain resistance or output resistance defined as:

The reciprocal of the rd is the drain conductance gd. It is also designated by Yos and Gos and called the common source output conductance . So the small signal equivalent circuit for FET  can be drawn in two different ways:

This low frequency model for FET has a Norton’s output circuit with a dependent current generator whose magnitude is proportional to the gate-to-source voltage. The proportionality factor is the transconductance ‘gm’. The output resistance is ‘rd’. The input resistance between the gate and source is infinite, since it is assumed that the reverse biased gate draws no current. For the same reason the resistance between gate and drain is assumed to be infinite.

The small signal voltage-source model is shown in the figure(b).

This can be derived by finding the Thevenin’s equivalent for the output part of fig(a) .

These small signal models for FET can be used for analyzing the three basic FET amplifier configurations:

Here the input circuit is kept open because of having high input impedance and the output circuit satisfies the equation for Id.