Q.1. The molecule of alkene family is represented by the general formula CnH2n. Now answer the following questions:(a) What do n and 2n signify?(b) What is the IUPAC name of alkene when n = 4?

Q.2. The atomic number of three elements are given below:

Q.3. The picture given below depicts the process of asexual reproduction in Plasmodium. 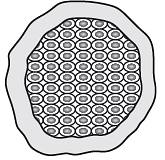 (a) Name the process depicted above and define it.(b) What is meant by asexual reproduction?

(a) Multiple Fission. It is a division of single celled organisms into many daughter cells simultaneously.(b) Creation of a new generation from a single individual or a single parent is known as asexual reproduction.

Q.4. A student noticed that an organism by mistake was cut into two parts. After sometimes, he noticed that both the parts developed into new individuals.(a) Name the mode of reproduction used by the organism. State an example of such organism which can multiply by this process. (b) State the type of cells which can carry out this process.

(a) The mode of reproduction used by the organism is regeneration. Hydra or Planaria. (any one example)(b) It is carried out by the specialized cells which can proliferate and make a large number of cells by cell division.

Q.5. Different species use different strategies to determine sex of a newborn individual. It can be determined by environmental cues or can be genetically determined.Explain the statement by giving examples for each strategy.ORIn human beings, the statistical probability of getting either a male or a female child is 50%. Give reasons.

(a) Decide which end of the solenoid A or B will behave as the north pole. Give reason for your answer.(b) Also draw the field lines inside the solenoid.ORA coil of insulated copper wire is connected to a galvanometer as shown in the diagram. State your observations when a bar magnet is:

(a) Pushed into the coil with its north pole entering first.(b) Held at rest inside the coil.

Q.7. In a biology class, teacher taught students about the energy flow by drawing a food chain. In the following food chain, plants provide 5000 J of energy to grasshopper. How much energy will be available to owl from snakes? Can the organisms of any trophic level be removed? 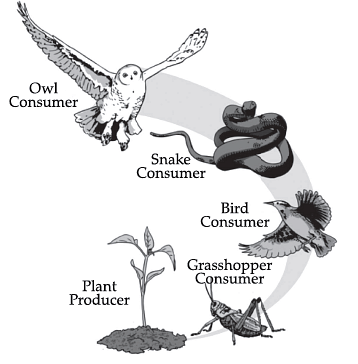 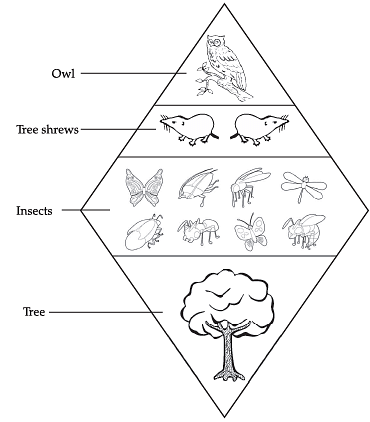 Q.8. Choose an element from period 3 of modern periodic table that matches the description given below in each instance. Give reason for your choice.(a) It has a similar structure to diamond.(b) It has same valency as Lithium.(c) It has variable valency and is a member of the Oxygen family (group 16).

(b) CH3OH and C3H7OH are homologous of ethanol.ORCH4O and C3H8O

Q.10. Two pea plants-one with round yellow (RRYY) seeds and another with wrinkled green (rryy) seeds produce F1 progeny that have round, yellow (RrYy) seeds.When F1 plants are self-pollinated, which new combination of characters is expected in F2 progeny? How many seeds with these new combinations of characters will be produced when a total of 160 seeds are produced in F2 generation? Explain with reason.

Round green: 30Wrinkled yellow: 30New combinations are produced because of the independent inheritance of seed shape and seed colour trait.

Q.11. (a) It would cost a man ₹3.50 to buy 1.0 kW h of electrical energy from the Main Electricity Board. His generator has a maximum power of 2.0 kW. The generator produces energy at this maximum power for 3 hours. Calculate how much it would cost to buy the same amount of energy from the Main Electricity Board.(b) A student boils water in an electric kettle for 20 minutes. Using the same mains supply, he wants to reduce the boiling time of water. To do so, should he increase or decrease the length of the heating element? Justify your answer.

(a) E = P × TSo, E = 3 × 2 = 6 kWhCost of buying electricity from the main electricity board = 6 x 3.50 = ₹21.0(b) To reduce the boiling time using the same mains supply, the rate of heat production should be large. We know that P = V2/R. Since V is constant, R should be decreased. Since R is directly proportional to L so, length should be decreased.

In the above circuit, if the current reading in the ammeter A is 2A, what would be the value of R1?OR

(b) Ozone shields the surface of the earth and protects living organisms from ultraviolet (UV) radiations released by the sun.Chlorofluorocarbons (CFC's) which are used as refrigerants in fire extinguishers lead to depletion of ozone layer.

(a) Tall (Tt, Tt, Tt, Tt)(b) 3: 1 (TT, Tt, Tt and tt)(c) DwarfReason: Being a recessive trait, dwarfness can only be expressed in the recessive homozygous condition or in the absence of dominant trait.ORGregor Johann Mendel, garden pea.

Q.15. Aashi observed the magnetic field lines of two bar magnets A and B as shown below.