(a) Thus, carbon can share its four electrons with four chlorine atoms 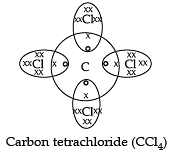 Q.2. Choose from the following:20Ca, 3Li, 11Na, 10Ne(a) An element having two shells completely filled with electrons.(b) Two elements belonging to the same group of the periodic table.

Q.3. (a) What is the pathway of sperm during ejaculation?(b) Name the organs producing sperms and ova respectively in humans.

(a) Sperms come out from testis into the vas deferens and pass through the urethra before ejaculation. The secretions of seminal vesicle and prostate glands provide nutrition to the sperms and also facilitate their transport.(b) Testis: Sperms, Ovary: Ova.

Q.4. Shweta conducted a study on a tobacco plant. She found that in tobacco plant, the male gametes have twenty four chromosomes. Based on this information, find out the number of chromosomes in: (a) Female gamete(b) Zygote.

Q.5. In a monohybrid cross between tall pea plants (TT) and short pea plants (tt), a scientist obtained only tall pea plants (Tt) in the F1 generation. However, on selfing the F1 generation pea plants, he obtained both tall and short plants in F2 generation. On the basis of above observations with other angiosperms, can the scientist arrive at a law? If yes, explain the law. If not, give justification for your answer.OR‘A trait may be inherited, but may not be expressed.’ Justify this statement with the help of a suitable example.

Q.6. Varun divided a magnet into three parts A, B, and C.

(a) Name the parts where the strength of the magnetic field is:(i) maximum(ii) minimum(b) The density of magnetic field lines differ at these parts. Explain. ORPriyanka arranged two magnets side by side as shown below.

(a) (i) Maximum strength – At A and C(ii) Minimum strength – At B(b) At poles A and C, magnetic field lines are crowded that diverges from poles, so magnetic density is high at the poles.While at B, they are parallel to the centre and hence magnetic effect is minimum.OR(a)

(b) The degree of closeness of magnetic field lines near the poles signify that the field is stronger there.

Q.7. Shilpa studied the flow of energy at different trophic levels. Based on her studies she draw a flow chart. What does this flowchart depict? Why a food chain cannot have more than four trophic levels?

ORIn the given figure, the various trophic levels are shown in a pyramid. What does "X" and "Z" represent? 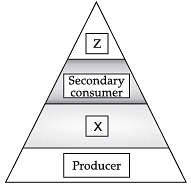 It is a food chain that is depicting 10% law of energy.The loss of energy at each step is so great that very little usable energy remains after four trophic levels.ORX: Primary consumer.Z: Tertiary consumer.

Q.8. Three elements are represented in the given periodic table:

By giving reasons, explain the following questions:(a) Element A is non-metal.(b) Atom of element C has a larger size than atom of element A.(c) Element B has a valency of 1.

Q.9. (a) Elements that form ionic compounds attain noble gas electronic configuration by either gaining or losing electrons from their valence shells. Explain by giving reason why carbon cannot attain such a configuration in this manner to form its compounds.(b) Name the type of bonds formed in ionic compounds and in the compounds formed by carbon. OR(a) What are isomers? Draw the structures of two isomers of butane, C4H10. (b) Why can’t we have isomers of first three members of alkane series?

Law of Dominance: Out of a pair of contrasting characters, only one is able to express while the other remains suppressed.

Q.11. (a) What is Electric power? Express it in terms of potential difference V and resistance R.(b) An electric iron of 1 kW is operated at 220 V. Find, which of the following fuses that respectively rated at 1 A, 3 A and 5 A can be used in it?

Q.12. The figure below shows three cylindrical copper conductors along with their face areas and lengths. Compare the resistance and the resistivity of the three conductors. Justify your answer.

Calculate the readings of the ammeter and the voltmeter when key 'K' is closed. Give reason to justify your answer.

We can rewrite this equation asRb = ρ(9L/A)For figure (c),Length of the cylinder = L/3Cross sectional area of the cylinder = 3ANow, we will simply put these values in the formula to find out resistance.So, we get Rc =

Q.13. Management of waste is very important in today's society. The generation of waste is getting doubled day by day, as the population is increasing continuously. Moreover, the increase in waste is affecting the lives of many people.(a) Differentiate between biodegradable and non-biodegradable substances with the help of one example each.(b) List two changes in habit that people must adopt to dispose non-biodegradable waste, for saving the environment. 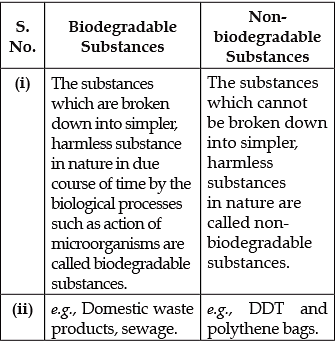 (b) Two methods of disposal of non-boiodegradable waste are:(i) Recycling: The wastes are treated and same value materials are extracted for reuse.(ii) Incineration: Medical and toxic waste are burnt at high temperature in  Incinerators. Incinerators transform the waste into ashes.

This section has 02 case-based questions (14 and 15). Each case is followed by 03 sub-questions (a, b and c). Parts a and b are compulsory. However, an internal choice has been provided in part c.

Q.15. Asif studied about electromagnetic current induced by changing magnetic field in the class. In the physics laboratory, he experimented the concept. He took two coils of insulated copper wire and wound it over a non conducting cylinder as shown. Coil P had larger number of turns than coil S.. He observed some deflections in the galvanometer and read it.

(a) What did he observed when, (i) key K was closed;(ii) Key K was opened.(b) Give reason for his observations.(c) Define the phenomenon involved in the activity.ORWhat will happen if the number of turns in the coil S in increased?

(a) (i) A momentary deflection was shown by the galvanometer.(ii) A  momentary deflection was shown by the galvanometer but in the opposite direction.(b) When key was closed or opened, the current in the coil P changed, therefore the magnetic field linked with coil S will  change and hence a current was induced in it.(c) Electromagnetic induction: The process by which a changing magnetic field in a conductor induces current in another conductor.ORIf the number of turns in coil S is increase, the induced current will be more and the deflection of the galvanometer will also be more.