The document Classification of Sources of Energy, Fossil Fuels, Hydro and Wind Energy Class 10 Notes | EduRev is a part of the Class 10 Course Science Class 10.
All you need of Class 10 at this link: Class 10

What is a Good Source of Energy?

A good source of energy would be one:

Renewable and Non-renewable Sources of Energy

Try yourself:Which of the following is a non-renewable source of energy?
Explanation

A non-renewable resource (also called a finite resource) is a resource that does not renew itself at a sufficient rate for sustainable economic extraction in meaningful human time-frames.
Fossil fuels are non renewable resource.
Wind and wood are renewable  as their localized replenishment can occur within time frames meaningful to humans.

Fuels that were formed from the remains of dead plants and animals are called fossil fuels. These were produced by complex processes with the help of a series of natural events over millions of years. The most widely used fossil fuels are coal, petroleum and natural gas. Plants trap solar energy in the form of food, and animals get energy when they eat the plants. Since fossil fuels came from plants and animals, their ultimate source of energy is the sun.

We get a number of different fuels from coal and petroleum. For example, we get petrol, diesel, kerosene and LPG from petroleum, and coke and natural gas from coal. When burnt in the air, fossil fuels give off heat, which is used for various purposes from cooking to generating electricity. However, these fuels are nonrenewable, and their reserves are running out. Unfortunately, we cannot repeat the events that led to their formation. Fossil fuels have played an important role in the technological advances made in the last three hundred years or so. Even today, most of the energy requirements of homes, industries and transport are met by fossil fuels. It is estimated that about 25% of our total energy consumption comes from coal. More than 90% of this coal is used for electricity generation in thermal power plants.

In most thermal power plants, coal is burnt to heat water for producing steam. The steam falls on the blades of a special kind of wheel called a turbine. A turbine is a device that rotates when steam, water or wind falls on its blades. The turbine turns the shaft of an electric generator to which it is connected. In this way electricity is produced.

Thermal power plants generated 65.6% of the total electricity produced in India in 2006. The rest was generated by hydroelectric (26.6%), nuclear (3%) and renewable-energy (4.8%) power plants.

In some thermal power plants, natural gas or oil is used as fuel. Natural gas is mainly methane (CH4). It is the cleanest fossil fuel, producing lesser pollutants than other fossil fuels. That is why vehicles using compressed natural gas (CNG) cause less pollution.

A majority of the world's energy is provided by fossil fuels i.e. coal petroleum or natural gas which are utilized by thermal power plants. Hence option (D) is the correct answer. When we talk of flowing water, we think of water flowing in rivers, streams, waterfalls, and so on. The flowing water has kinetic energy. The ultimate source of this energy is the sun. This is because the energy of the sun evaporates water, which forms clouds that cause rainfall or snowfall. The rain and melting snow feed rivers, etc., whose flow we use.

The energy of flowing water has been used for centuries to carry logs down rivers, to turn waterwheels to grind grain, run mills, and so on. Water striking the blades of the waterwheel makes it rotate. This design was modified to make water turbines, which are used to generate electricity from flowing water.

Electricity generated by using the kinetic energy of flowing water is called hydroelectricity. The electric power thus generated is called hydroelectric power.Electricity is generated from flowing water at a hydroelectric power plant. For large hydroelectric plants, water from a river is diverted to a large reservoir, which is an artificial lake to store water. A high dam is constructed on one side of the reservoir to hold back the water. The building housing the generator is at the base of the dam, on its other side. Water flows down through pipes from near the top of the dam to the generator house below. It strikes the blades of a water turbine with tremendous speed, making it rotate. The turbine rotates the shaft of a generator to which it is connected. This makes the generator produce electricity. In this way, the kinetic energy of flowing water is used to rotate the turbine, and the rotational kinetic energy is converted into electrical energy. Hydroelectricity has huge potential worldwide. In India, it is estimated that 145,000 MW of hydroelectricity can be generated. Out of this, by 2006, India had an installed capacity of about 34,000MW.

A moving mass of air is called wind. Let us see, with the help of an example, what causes wind. During the day, the land near the sea heats up faster than the water of the sea. Therefore, the air over the land heats up faster than that over the sea. The warm air over the land rises, and to take its place the colder air from the sea moves towards the land. This moving air is called wind. Similarly, winds arise whenever two adjoining areas on the surface of the earth are unequally heated by the sun. Like any moving object, wind has kinetic energy. Clearly, the ultimate source of this energy is the sun.

The invention of the windmill made it possible to do things like grind grain at mills and lift water with the help of wind energy. A windmill is a device in which the energy of the wind is used to rotate a set of blades, and the rational energy of the blades is used to do some work. The blades of a modem windmill make it look like a fan mounted on a tall column. The blades are kept high above the ground to catch the wind.

Generating Electricity from WindA windmill can be designed to rotate the shaft of a generator. Such a windmill is usually called a wind turbine.

A specially designed wind turbine is connected to the shaft of small generator. The electricity produced by such an arrangement is not sufficient even for a small town. To be commercially useful, a number of wind-electric generators are set up in a large area, called a wind farm. The combined electrical outputs of all the generators are then used to supply power. 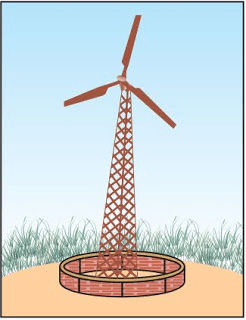